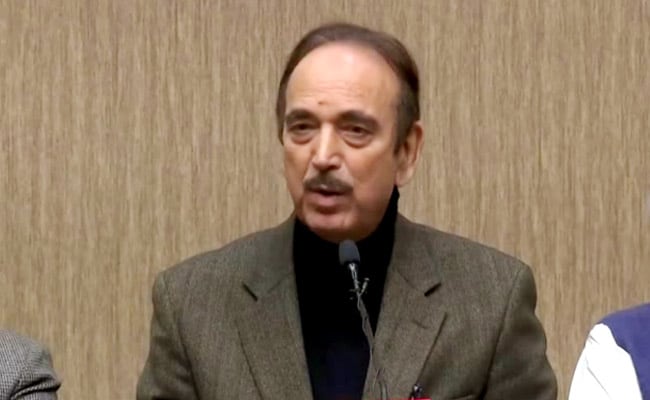 Ghulam Nabi Azad said that if Congress leaders get a ticket to the party, “they book a 5 star hotel first.”

Congressman Ghulam Nabi Azad, one of the party’s main dissidents, today offered another explanation for the party’s recent election crisis. Speaking amid the latest controversy to hit the party – fierce criticism of party colleague Kapil Sibal after the Bihar elections – Mr Azad said leaders who get a ticket are now turning their backs on the heat and the dust of the countryside, preferring instead to stay comfortably installed in a 5 star.

“The problem with our leaders is that if they get a party ticket, they first book a 5 star hotel. Even there, they want a luxury place. Then they won’t move without an air-conditioned car. They will not go to places where there is an unpaved road, ”he told ANI news agency.

“Elections are not done in 5 star hotels … We cannot win until we change this culture,” he added.

Whether it was helicopters in charge or poor leadership at the top, many things were cited as the reason for the party’s poor performance.

“Many blame the leaders. Congress President Rahul Gandhi,” Azad said, instead pointing to the local party leaders who are appointed to the highest positions.

“They’ve lost connection with the people. The block or district leaders. As soon as someone gets a rank, they print their letter pads and business cards and think the job is done. But that’s it. where the work begins, ”he added. .

Indicating that senior management was not doing badly either, he said under Sonia Gandhi, Congress won five states in four to five years, “When I was in charge of electoral affairs.”

ALSO READ  "Apparent to anyone who is not blind": Salman Khurshid on supporting Gandhis in Congress

“We won in Karnataka, Kerala and we formed an alliance in Tamil Nadu. In Andhra Pradesh, we won in 2004. The party leadership did not interfere in the functioning of the party”, a- he said.

“In Andhra Pradesh we had five parliamentary seats which increased to 37 in 2004. The UPA-I government was formed mainly due to the performance of Congress in Andhra Pradesh. In the Assembly elections our seats increased to around 180. In a year and a half I have only visited Delhi three times. I only visited the city of Hyderabad twice as most of the programs were conducted in rural areas. I remained minister of the union, but still worked in rural areas. Elections are not won by a five-star culture, ”he added.

He said that as long as the members of the bureau were not elected but appointed, they would not be in contact with the base. There should be people elected, Azad added.

In the interview with The Bharat Express News, Mr Sibal pointed out the party’s setbacks in Bihar, Madhya Pradesh and Gujarat, and said he was forced to make his views public: “There is no dialogue and there does not seem to be any effort for a dialogue between the leaders ”.

Three key congressional leaders had voiced their criticism of his remarks.

Among them, Salman Khurshid, a Gandhi family loyalist, said: “I have made it very clear that the Gandhi are the leaders of Congress. No one can deny it. I don’t care whether we have or not a president “.

Farmer protest: Center to meet farmer leaders on Thursday for crucial round of talks