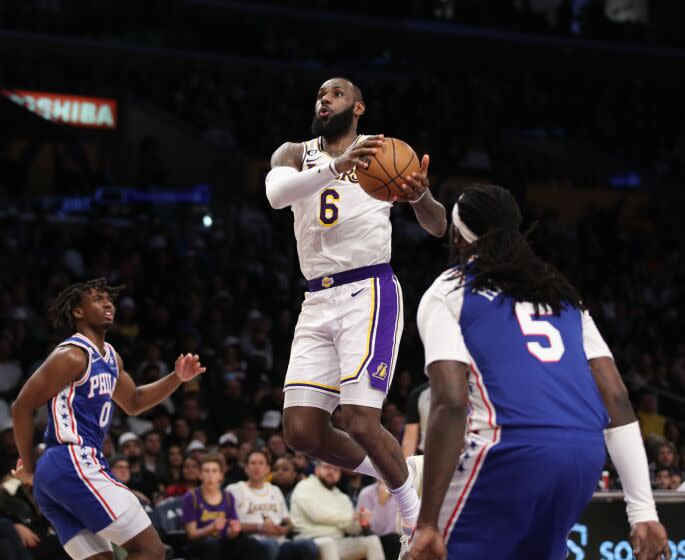 LeBron James put up a half-hearted display on the left elbow before jumping to the top of the key where Russell Westbrook found him with a pass.

James caught the ball without hesitation and effortlessly shot it toward the hoop during the first quarter on Sunday night against the Philadelphia 76ers.

When it went through the rim and into the net, James became the second player in NBA history to score 38,000 career points. The player he is chasing, Kareem Abdul-Jabbar, is the only other member of the club.

ALSO READ  Lamar Jackson's extended absence is creating more contract problems with the Ravens, and both parties have caused it

After the next timeout, when James’ milestone basket was displayed on the Crypto.com Arena scoreboard, announcer Lawrence Tanter called it another great moment in Lakers history.

But these moments in James’ career haven’t been great as far as the team’s play is concerned. When he passed Michael Jordan on the all-time scoring list in Los Angeles, the Lakers lost. When he passed Kobe Bryant, the team lost in Philadelphia, and when he became Washington’s second all-time leading scorer, that also came in a Lakers loss.

ALSO READ  'So excited': Virat Kohli after RCB won the bid for the women's IPL team

And by the time the horn sounded and Joel Embiid blasted the ball into the air, points 38,000 and 38,001 couldn’t really be celebrated, another loss that marred one of James’ landmark performances.

James was amazing, making a 360-degree spinning layup in the second half to remind him again that he’s aging in a way that few in any sport have.

He scored 35 to go with 10 assists and eight rebounds. And Westbrook had 20 points, 14 rebounds and 11 assists – his fourth triple-double this season since being benched, the most for an NBA reserve.

But for all the fighting and excellence from the top of the Lakers roster, they left the court losers for the third straight – Embiid’s silky smooth midrange play in the fourth the ultimate difference.

A three-pointer from Troy Brown Jr. and a Lakers stopper gave them a chance to win, but coach Darvin Ham called no timeout when Westbrook slid the ball onto the left wing. With Embiid guarding him, Westbrook fumbled the ball before charging the rim, ending the game under the basket in frustration.

Embiid finished with 35 points and 11 rebounds and James Harden scored 24 more with 13 assists.

Benglas linebacker Germaine Pratt: “Why the hell would you touch the quarterback?”