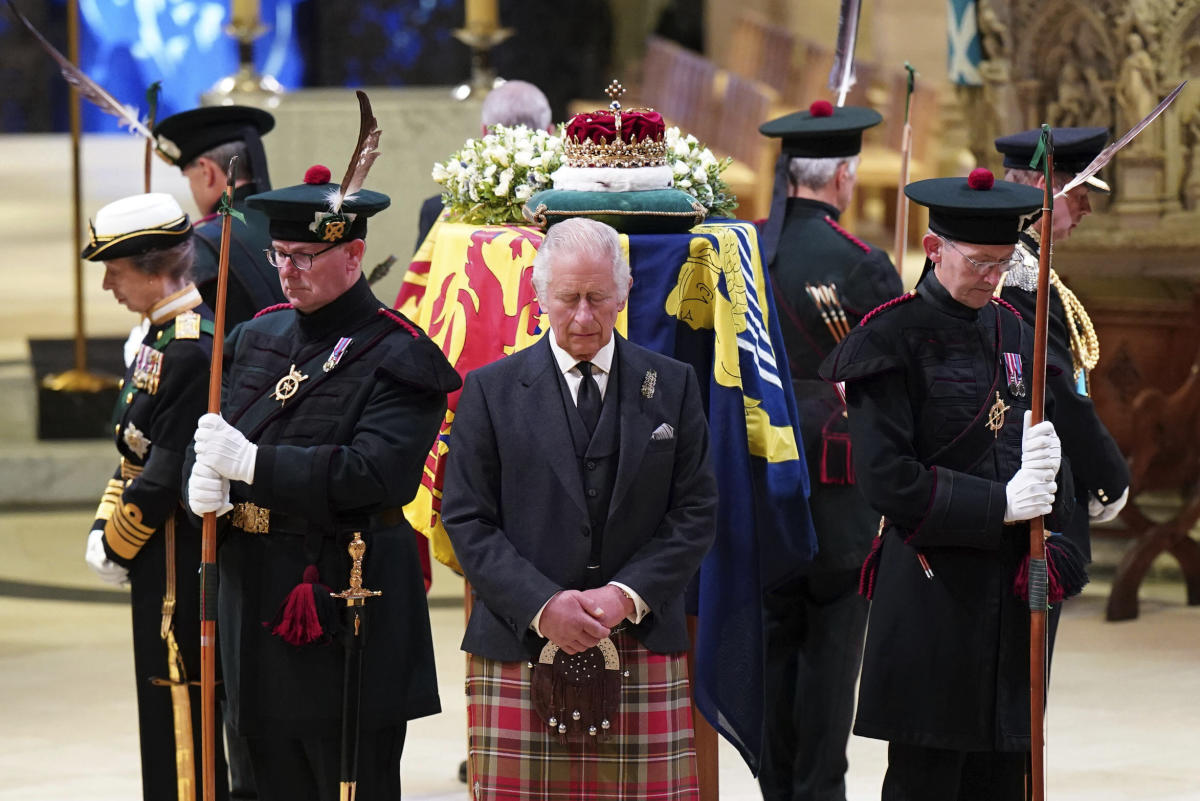 EDINBURGH, Scotland — King Charles will fly to Northern Ireland on Tuesday on the final leg of his tour of the countries that make up the United Kingdom.

Thousands of people queued in Edinburgh all night to pay their last respects to his mother’s coffin in St Giles’ Cathedral in the Scottish capital. Some people even walked past the box and rejoined the end of the line to take a second look.

On Monday night, Charles and his siblings, Anne, Andrew and Edward, stood with bowed heads briefly around their mother’s flag-draped coffin as members of the public passed by.

Early on Tuesday, a man in a medal-adorned suit stopped, bowed his head, and continued on his way. A woman wiped away tears with a handkerchief. Another woman with two young children in their school uniforms walked slowly past the coffin.

– Anger over the past, indifference meets the death of Queen in India

— After the death of a famous queen, life in London continues

— Queen hailed in Scotland “as a constant in our lives”

— People who want to pay their last respects to queen have to wait a long time, strict rules

— For Queen Elizabeth II, the Balmoral Estate was the place to be ‘normal’

— What is the future for the UK after Queen Elizabeth II is laid to rest?

EDINBURGH, Scotland – King Charles III and his siblings have stood in silent vigil around the coffin of their mother, Queen Elizabeth II in Edinburgh’s St Giles’ Cathedral.

Charles, Princess Anne, Prince Andrew and Prince Edward lowered their heads as they stood on four sides of the oak coffin Monday night. They stood for about 10 minutes next to four members of the Royal Company of Archers, who stood guard armed with arrows and quivers.

As they performed the traditional vigil, a procession of members of the public lined up to view the Queen’s casket and walked past. Some bowed as they passed the king, while others passed solemnly with their heads bowed.

LONDON – Officials in charge of the park outside Buckingham Palace have told people to stop leaving marmalade sandwiches in tribute to Queen Elizabeth II because of the “negative impact on the park’s wildlife”.

Some mourners have left the snacks alongside flower tributes at Buckingham Palace and neighboring Green Park. The buns are a reference to a comedy skit featuring the Queen and an animated Paddington Bear filmed earlier this year for the late monarch’s platinum anniversary.

In the video, the Queen said that like Paddington Bear, she also prefers marmalade sandwiches and hides them in her purse “for later.”

The Royal Parks organization said on Monday that people should not leave the snacks but can leave teddy bears and other items if they wish.

Another heat wave is coming. It won’t be as extreme...

Another heat wave is coming. It won’t be as extreme...