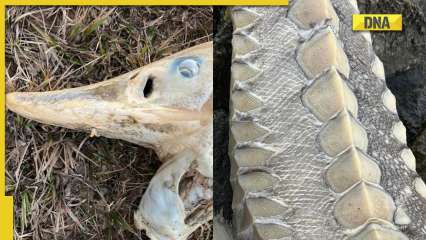 A rare species dubbed “living dinosaur” by the U.S. Fish and Wildlife Service was found by a high school physics teacher hiking along the shore. The fish carcass has been identified as Gulf sturgeon, an ancient organism. The specimen found by the schoolteacher in Alabama was over five feet long. However, according to the US National Oceanic and Atmospheric Administration (NOAA) Fisheries, the species can grow nearly 9 feet and weigh more than 180 kg.

The Gulf sturgeon has remained largely unchanged in its appearance for more than 200 million years, earning it names such as “prehistoric fish” and “living dinosaur”. The found carcass will be studied by scientists at the University of Southern Mississippi to “learn more about this unusual fish,” it was reported.

The astonishing discovery was made on Saturday. The discoverer, Tami May, said the fish was a “protected endangered species” and “rare to see”. Authorities were notified as required. The species was reportedly placed in the protected category due to dam construction, lack of reproduction and “possible over-harvesting”.

ALSO READ  Do you want to block telemarketing, spam calls on Jio, Airtel and Vi? Here's a step-by-step process

Photos were released showing the fish lying upside down with its head nearly separated from the body.

The fish was once a thriving species in the Gulf Coast in the US, located between the Mississippi River and Tampa Bay in Florida. The fish hatch in freshwater rivers and the fry later travel to the sea. Upon reaching adulthood, they return to the freshwater body to lay eggs.

READ | Mega Space Event in 2023: 5 Planets Visible from Earth on THESE January Dates

More than 50,000 Google, YouTube accounts that support pro-Chinese propaganda have been blocked

The Bharat Express News - January 30, 2023 0
Real Madrid manager Carlo Ancelotti is not freaking out about their La Liga title defense, insisting there is still a long way to go...

Nick Offerman and Murray Bartlett reflect on the tragic ending of...