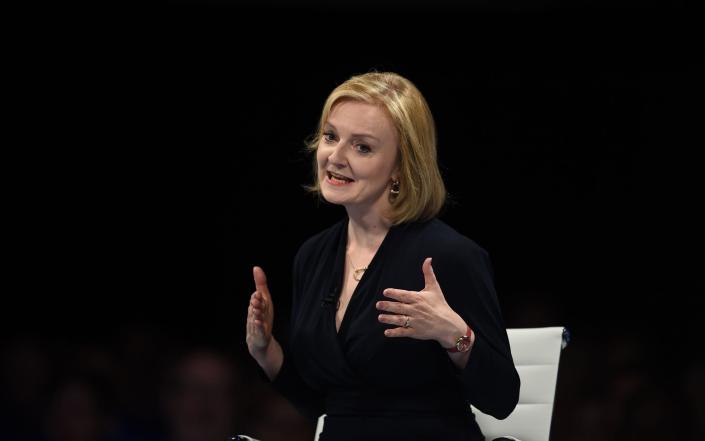 Liz Truss described herself as a “freedom fighter” against Ukraine on Thursday night, telling Conservative Party members they could be confident she would do anything to ensure Vladimir Putin is defeated.

The foreign minister said she would make Volodymyr Zelensky, Ukraine’s president, the first foreign leader she names if elected as the next prime minister, and pledged to follow in Boris Johnson’s footsteps and become his “greatest friend”. to be Kyiv.

Ms Truss said she would urge the G7 countries to provide more lethal and humanitarian aid to Ukraine and “deploy fully to ensure that Putin fails and suffers a strategic defeat, and that Russia is limited”.

She also pledged to rewrite the Integrated Defense and Security Assessment to focus on threats from Russia and an “increasingly assertive” China, which includes a pledge to spend three percent of GDP on defense by 2030.

Writing for The Telegraph, the Secretary of State said: “Basically I am a freedom fighter. My instinct is always to defend freedom when it is threatened.

“The British people can rely on me to do what is right and necessary in Ukraine, and to defend our freedom at home and abroad. My first and last priority will always be the safety and security of Britain.”

The integrated overview, published last March, was completed before the Russian invasion of Ukraine and NATO’s withdrawal from Afghanistan. It sets out the government’s vision for Britain’s role in the world over the next decade.

Miss Truss said she would be “completely committed” to a Ukrainian victory over Russia.

She pledged to oblige the UK to play a leading role in a “new Marshall Plan” for Ukraine — working with allies to provide technical and financial assistance for reconstruction — and pledged immediate aid and long-term commitments to work alongside the Ukrainians.

As Prime Minister, she would host next year’s Ukraine Recovery Conference in Britain, bringing Kiev and its allies to London, and heed Mr Zelensky’s call for Britain to lead the reconstruction efforts.

The UK would join a board of trustees to coordinate the recovery process between Kiev and Ukraine’s allies, including the establishment of an office in London.

She wrote: “What is happening in Ukraine matters to all of us. This is not just a battle for territory or a conflict between two nations, but a great battle between those who believe in sovereignty and self-determination, and authoritarians who want to destroy freedom and true democracy.

“As Prime Minister, I will be Ukraine’s greatest friend – following in the footsteps of Boris Johnson – and I will do my best to ensure that Putin fails in Ukraine and suffers a strategic defeat, and that Russia is tied up in the future. laid.

“This conflict is at stake, and now is not the time to probe for concessions and compromises to a hideous dictator.

“By working with our partners in the West, we must continue to provide arms, aid and diplomatic support under the terms of Article 51 of the UN Charter. I am the candidate the British people can trust in Ukraine, and whom they can trust to defend our freedom at home and abroad.”