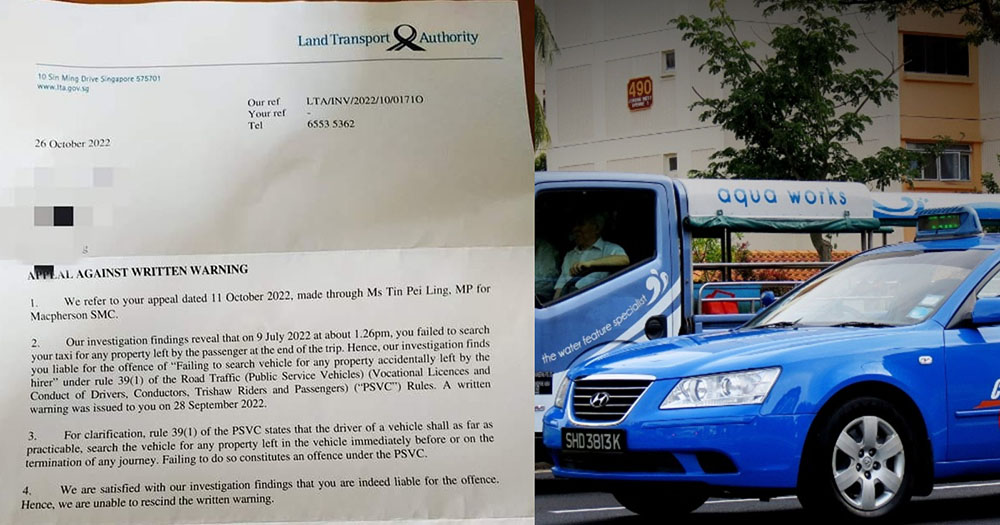 The Land Transport Authority (LTA) has withdrawn a written warning it issued to a taxi driver for failing to search his taxi for property “accidentally” left behind by a passenger in July 2022.

The withdrawal follows a post uploaded to the Beh Chia Lor – Singapore Road Facebook group on Nov. 8, depicting an image of LTA’s letter of reply to the driver’s appeal against the warning, which he made through his Member of Parliament (MP). . , Tin Pei Ling.

The message was captioned:

“To all taxi drivers, if we don’t look behind the seat after the passenger gets out and the passenger has left/lost items in the taxi, if a passenger makes a complaint to LTA, we will receive a stern warning letter and may be held liable. “

The letter, dated October 26, showed that the LTA stated that their investigation revealed that the driver had not searched his taxi for property left by a passenger at the end of a trip, at 1:26 p.m. on July 9.

The driver was therefore held liable for the offense of “failing to search the vehicle for property accidentally left behind by the renter”.

The written warning was then issued to him on September 28.

The letter ended with the following statement:

“We are satisfied with our investigation findings that you are indeed liable for the offence. Therefore, we cannot withdraw the written warning.”

Yeo said both the National Taxi Association (NTA) and the National Private Hire Vehicles Association (NPHVA) were concerned about the driver’s warning, and that NTUC Singapore had contacted the LTA for clarification on the matter.

In response, the MJA clarified that this is a “long-standing rule” and also serves as driver good practice.

Yeo also revealed that the LTA had decided to withdraw the letter.

The intention is to remind the driver of good practices: MJA

Further clarifying the rationale behind the letter, the LTA stated “the intent was to remind the driver of such good practice and that the LTA has never prosecuted a driver for such violations.”

“Going forward, the LTA agreed to review the continued relevance of this rule with stakeholders,” Yeo said.

She also stressed that the NTA, NPHVA and NTUC Singapore believe that the safety of drivers should be a top priority, as their working conditions often do not allow them to search for items “accidentally” left behind by passengers.

“While it is a good practice to have, it should not be an obligation that results in fines. We thank the LTA for withdrawing the warning letter to our driver and will continue to work with the LTA and other stakeholders to support our drivers. “