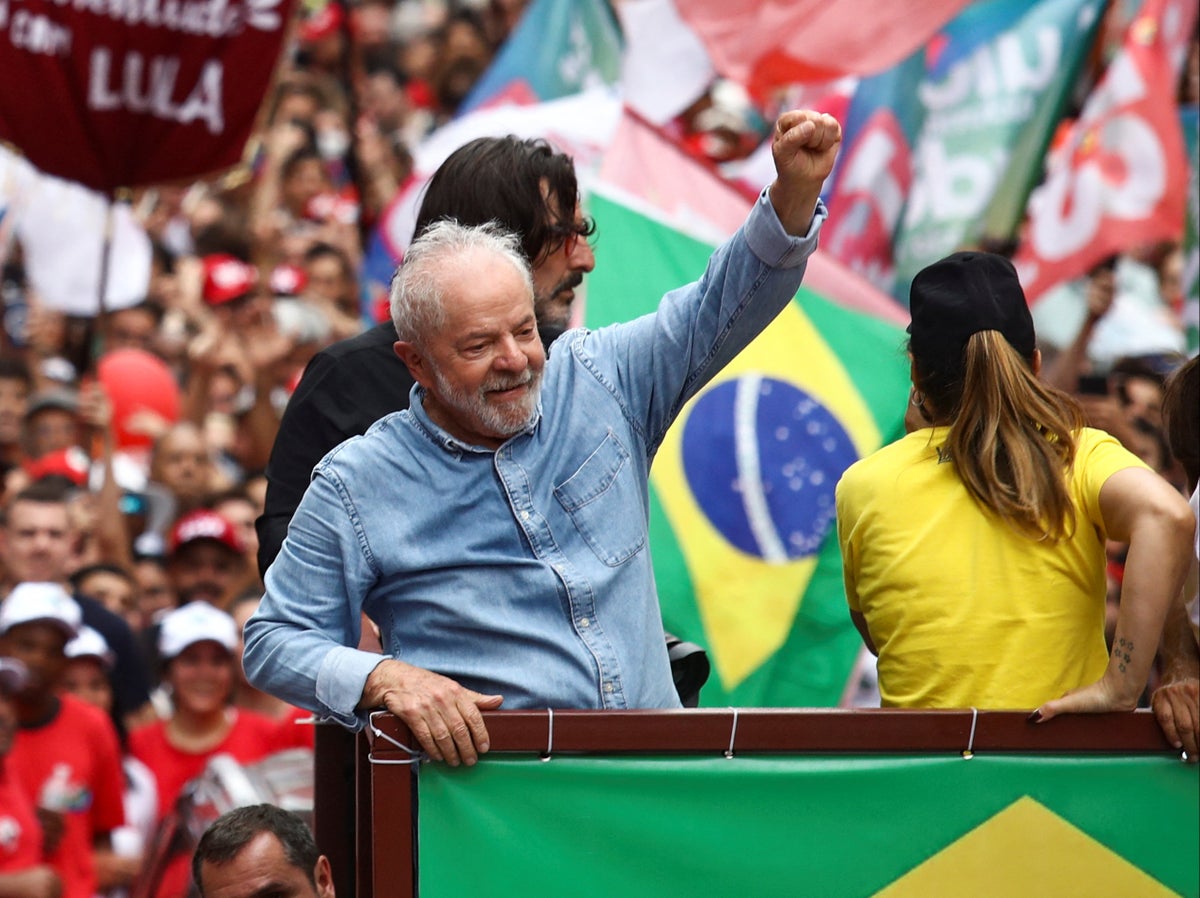 One of the biggest draws at the Cop27 summit in Egypt is a world leader who won’t take office until January. Luiz Inacio Lula da Silva arrives in Sharm El-Sheikh after winning a memorable election in Brazil with huge consequences for the Amazon rainforest – the ‘lungs of the planet’ – which has suffered severe looting under far-right pastor Jair Bolsonaro.

Lula is expected to meet with the likes of Joe Biden, Emmanuel Macron and UN Secretary General Antonio Guterres, all of whom were quick to congratulate him on his win.

Bolsonaro stated in his 2019 election that Brazil would not host Cop25 as planned, and failed to show up for Cop 26 in Glasgow last year after being internationally convicted of deforestation in the Amazon.

There was a collective sigh of relief among those concerned about the climate emergency over the departure of Bolsonaro, under whose oversight Brazil’s emissions rose 12 percent last year alone. In the past 12 months, deforestation in the Amazon has increased by 64 percent, making an area almost twice the size of New York City – on top of losing an area bigger than Belgium in its first two years in power.

There has been a surge in mining, logging and wholesale clearance, with indigenous communities being stripped of their land, often through violent intimidation, after 600 regulatory changes in just one year.

There is little regret from the Biden administration over the departure of Bolsonaro, who enjoyed his nickname ‘Trump of the Tropics’. In the first phone call between the US president and Lula after his narrow election victory on October 31, climate was one of the main topics of discussion. Macron is said to have played a key role in the freezing of a trade deal between the EU and the Mercosur bloc – Brazil, Argentina, Uruguay and Paraguay – over his dismay and alarm over Bolsanaro’s actions. Guterres had said more than once that the Amazon must be protected for the sake of the planet.

Lula stated in his victory speech that the ecological damage his predecessor inflicted on the world’s largest rainforest will be stopped and reversed. There will now be tremendous pressure on the 77-year-old to keep his promise.

During Lula’s previous term as president, from 2003 to 2011, there was a significant decline in deforestation in the Amazon. He was barred from participating in 2019 after being jailed on corruption charges, which the country’s Supreme Court later ruled were fake and politically motivated.

Lula’s team insists he is ready to take up the mantle again, not only for Brazil but on a larger scale, with plans for a green alliance with two other major rainforest states, Indonesia and the Democratic Republic of the Congo (DRC) with the possibility that Peru and Colombia also participate.

Brazil, Indonesia and the DRC signed an agreement at Cop26 in Glasgow last year to halt and reverse deforestation by 2030, but there seemed little chance of Brasilia meeting its goals under Bolsonaro. With Lula back in power, the alliance could make joint proposals on carbon markets and financing, giving it more bargaining power with the West.

“Having such a strong voice as Lula’s in a future alliance would strengthen and accelerate efforts for equitable and climate-friendly economic development,” said Annisa Rahmawati, head of Indonesia’s conservation group Satya Bumi. “It will put pressure on the richer countries and also ensure that our forests are preserved.”

In addition to international goodwill, there is also financial aid for Lula’s new government. Norway and Germany resume their Amazon protection subsidies to Brazil, which were suspended under Bolsonaro in 2019. Oslo’s contribution is approximately $33 million per year. Germany has pledged $1.5 billion a year in international biodiversity financing and a significant portion of that is expected to go to the Amazon. Heiko Thoms, the country’s ambassador to Brasilia, said: “Brazil has had impressive results in reducing deforestation in the Amazon region and it could do the same again in the future.”

Domestically, the Supreme Court in Brasilia authorized the reactivation of the Amazon fund in the state’s development bank, which was effectively frozen by Bolsonaro, freeing up £525 million that lay unused.

“The Amazon Fund is the largest forest protection fund ever created,” said Tasso Azevedo, Climate Observatory coordinator and architect at the Fund. “The losses from the paralysis over four years are irreplaceable, the reactivation is urgent and allows us to protect the forest, promote sustainable development and fight deforestation again.”

However, the narrow-mindedness of Lula’s victory illustrates that Bolsanaro’s repeated claims that the West is trying to prevent Brazil from taking advantage of its assets strikes a chord with many voters.

Ricardo Salles, an environment minister in the Bolsonaro administration who was forced to resign after being accused of illegally trading Amazon timber, was elected to Congress by a significant majority in the country’s most populous state, Sao Paulo. Marcos Rocha was re-elected as governor of Rondonia state, two days after removing environmental protection from much of the territory.

Lula said in his victory speech: “We will again monitor and monitor the Amazon. We will fight any illegal activity. At the same time, we will promote sustainable development of communities in the Amazon.”

The pursuit of sustainable development has led to a number of proposals.

Among those interested is one from the ‘Aya Initiative’ that plans to tap private enterprises into sustainable environmental projects. their report, The Amazon Marathon: Brazil leads a low-carbon economy from the Amazon to the worldwill be presented at Cop27.

It argues that Brazil has failed to achieve the same success as countries such as China and South Korea using a resource-consuming economic model, and that a new sustainable approach is needed.

“After making significant progress in the 2000s, Brazil has returned to the hunger map in recent years, back to levels last seen in the 1990s,” it reads: “More 33 million people are now suffering from hunger Deforestation is directly linked to the rapid expansion of agricultural activities [northern collection of states known as] Legal Amazon, as much as 95 percent of deforestation is illegal, almost all on public land through illegal land grabs,” it says.

Alexandre Allard, one of the founders of ‘Aya’ who attends Cop27, claims that “it will be possible to make Brazil the largest green economy in the world.”

The French entrepreneur, born in Washington DC and part of his childhood in Ivory Coast, sold his data company Consodata to Telecom Italia two decades ago for 400 million euros and moved to Brazil.

In Sao Paulo he creates an ‘Aya Hub’ in which hundreds of commercial companies come together in a ‘green chain’. Ultimately, he hopes to raise $10 billion for the Brazilian economy through sustainable partnerships.

Allard is currently working on a $530 million project, Matarazzo City — an area of ​​30,000 square feet of reclaimed land that he says will be carbon neutral. There are 10,000 trees with two parks, Mario Covas and Trianon, that will be added to the project soon. “Cities produce an enormous amount of CO2 emissions. It’s great that we’re trying to save the forests, but cities also need to be healed for real sustainability,” he said.

Patricia Ellen da Silva, co-founder of ‘Aya’, is a former secretary of economic development in the state government of Sao Paulo and currently a managing partner for Brazil in the consulting firm Systemiq.

“I focused on sustainable economic development when I worked for the government of Sao Paulo and watched Brazil become an international pariah under Bolsonaro,” she said. The Bolsonaro government tried to block initiatives that we penetrated at the state level, it was a constant battle, but even then we had great success.”

She added: “The private sector must play a key role in decarbonizing the economy and play a role in achieving social justice, climate justice and technology. It is a logical step.”

Ellen emphasized the human factors behind the Amazon crisis. “The people in that region are lagging behind the rest of Brazil in all aspects of well-being – employment, health, education, security. The indigenous community is losing their land and livelihood.”

Ellen’s grandmother was from the indigenous community, while her grandfather was a miner from Europe.

“It was, as you can imagine, an interesting match,” said the single mother of young twins. “What I also found interesting about my family history was how strong the women, my grandmothers, my mother had to be to survive in a patriarchal society.

“Even now, among Amazon’s underserved people, it’s women who get the worst deal. We need to change that. Sustainable development cannot simply be a wish, it is a real necessity.”

Kwasi Kwarteng’s mini-budget was ‘not settled’ a day before the event, says Andrew Bailey