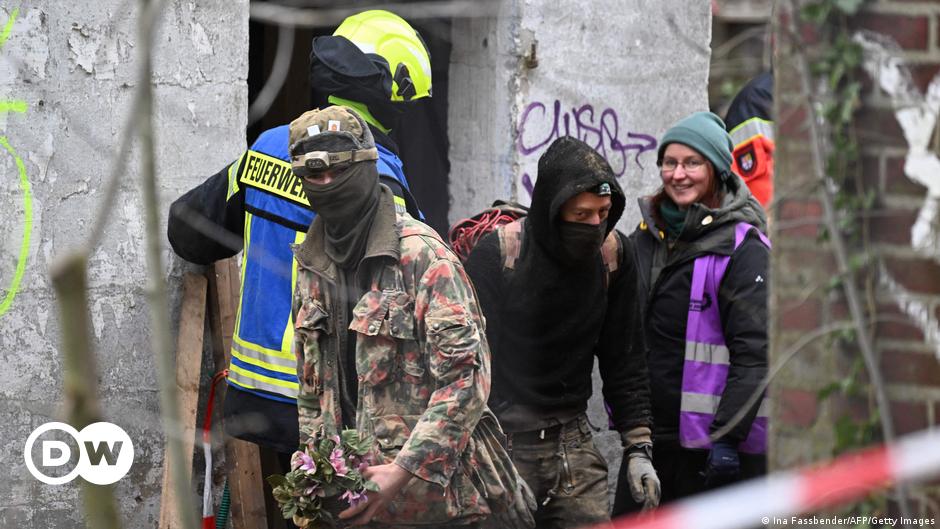 A long-running demonstration by climate activists against the expansion of a large coal mine ended Monday when the last two activists were taken by police from a protest camp in the village of Lützerath in western Germany.

After several days of police evictions, the last two holdouts were locked up by officers in a self-built underground tunnel.

Despite the setback, climate organizers have called for a large-scale protest in Lützerath for Tuesday. “Come today and let us be active and peaceful tomorrow,” Carla Hinrichs, spokesperson for the activist group Last Generation, wrote on Twitter.

What’s next for the protests? Leonie von Hammerstein reports from Lützerath

Why is Lützerath important?

The hamlet, west of Cologne, has been the target of energy giant RWE’s expansion of the Garzweiler lignite mine for nearly a decade.

The approximately 900 inhabitants had all been resettled by 2018 and the village was slated for demolition.

Despite successive German governments pledging to stick to a plan to phase out coal by 2030, RWE was given permission to continue open-pit mining for the foreseeable future.

After losing the battle to protect the old Hambach forest, which borders the opencast mine, from RWE’s bulldozers, activists who had occupied the forest settled in what was left of Lützerath.

Protest took the form of marches, lawsuits and occupations of the village. According to organizers, some 35,000 people took part in the most recent demonstrations against the expansion of the lignite mine. About 80 people occupy the protest camp.

Fighting between protesters and police

Among those gathered at the site was Greta Thunberg, who called the police response to the protests “outrageous”.

Last Wednesday, police began to expel demonstrators from the camp, sparking clashes between the two groups.

Activists and journalists uploaded videos to social media showing police using batons, pepper spray and water cannons against protesters, as well as other examples of what they called excessive force.

Police accused the activists of “violence”, such as setting fire to police barricades, and said at least 70 officers were injured during the eviction process.

Federal Interior Secretary Nancy Faesar called the protesters “irresponsible” for “endangering not only themselves but the police as well”.

Economy Minister and leading Green Party politician Robert Habeck called the mine’s expansion a “sin” but said the government wanted to “work to keep this sin as short as possible and not constantly prolong”.

RWE has announced that the final demolition of Lützerath will take place in the coming days.

Scientific consensus is that the burning of fossil fuels is a major contributor to climate change, which will have catastrophic consequences for humanity due to rising temperatures and loss of biodiversity.