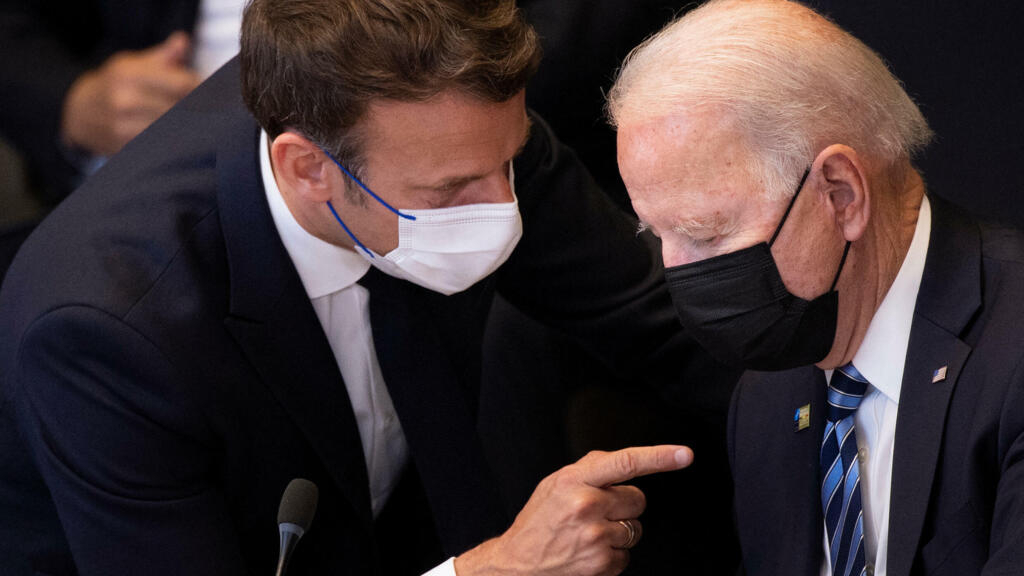 US President Joe Biden and his French counterpart Emmanuel Macron are due to meet later Wednesday by phone for the first time since an argument broke out over the sale of submarines to Australia, the spokesperson said. word of the French government.

Paris was outraged that Australia negotiated with Washington and London in secret behind its back, which French Foreign Minister Jean-Yves Le Drian called “betrayal” and “stab in the back” .

The call between Macron and Biden would be an opportunity to “clarify both the manner in which this announcement was made and the path for an American re-engagement in its relationship with an ally,” spokesman Gabriel Attal told the outcome of a French council of ministers.

French officials were told of the loss of the contract just hours before Biden unveiled the new AUKUS security and defense partnership between the three English-speaking countries.

Macron awaits “clarification on the American decision to keep a European ally out of fundamental discussions on cooperation in the Indo-Pacific”, added Attal, adding that French anger remains unchanged.

“We expect our allies to recognize that the exchanges and consultations that should have taken place did not take place, and that this poses a question of trust, on which we must all draw conclusions now.”

The timing of the call between Biden and Macron, a week after the dispute began, was also intended to send a new message of French discontent.

The US administration said on Sunday that the 78-year-old president was seeking an interview, but Macron was in no rush to pick up the phone.

The dispute has plunged ties into what some analysts see as the most acute crisis since the 2003 US-led invasion of Iraq, which Paris opposed.

After four years of tumultuous relations with former President Donald Trump, the feud has dashed hopes of a complete reset of Franco-American relations under the Biden administration, which took office in January.

Macron, 43, and Biden first met in person in June at a G7 summit in Cornwall, southwest England, where they were seen smiling widely together.

Gilles Gressani, chairman of the geopolitical study group, said this week that confrontations with the United States are “a constant in French foreign policy”.

But he added that “the intensity of the reaction (of France) is striking”.

Meanwhile, France’s European allies have rallied around Paris, but some have warned the dispute should not torpedo trade talks.

German Europe Minister Michael Roth said on Tuesday that France’s diplomatic crisis with the United States was a “wake-up call for all of us” to the importance of uniting an often divided EU on foreign policy and of security.

The show of solidarity by Germany and senior EU officials was welcomed by France, which said the breakdown in trust with Washington strengthens the case for Europe to set its own strategic course.

French Minister of European Affairs Clément Beaune described the dispute as a “European question” and not just a French one, when he arrived at ministerial talks in Brussels, the chaotic withdrawal of the United States from Afghanistan in August also being a source of irritation among EU members.

EU Council chief Charles Michel said he had a “frank, direct and lively exchange on AUKUS” with Australian Prime Minister Scott Morrison on the sidelines of the United Nations General Assembly in New York.

European Internal Market Commissioner Thierry Breton warned that there was a growing feeling “that something is broken” in Europe’s relations with Washington.

“So it is probably time to take a break and reset our EU-US relations,” he said in a speech in Washington.

The Bharat Express News - October 17, 2021 0
Aquaman is back. Jason Momoa has revealed a behind-the-scenes look at Aquaman and the Lost Kingdom, the first big DC Extended Universe superhero...

EPL: Man Utd decide to sack Solskjaer after 4-2 loss to...

‘It was hell for us’: Former Canadian Forces contractor on flight...