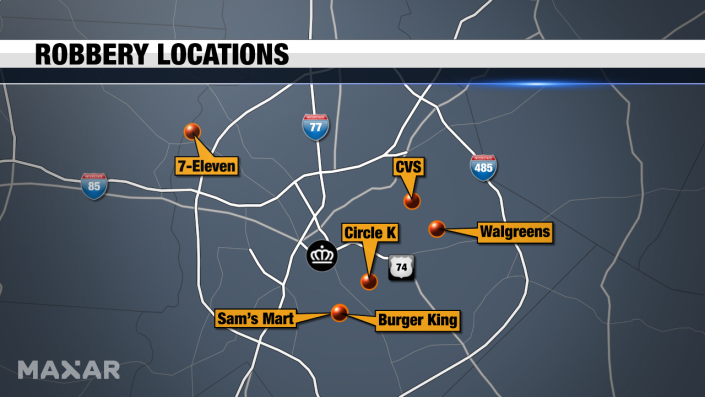 A man was arrested this week for a series of robberies in Charlotte, Charlotte-Mecklenburg police announced.

At a press conference on Friday, Lieutenant Bryan Crum said it all started Wednesday afternoon and ended early the next day in an arrest.

Lt. Crum said around 3:30 p.m. Wednesday that someone robbed the Walgreens on East WT Harris Boulevard on Hickory Grove Road. He said a man with a gun demanded money from a cashier, took it, then drove off.

Crum said there were four more robberies after that that appeared to have been committed by the same person, saying the suspect used different cars in the process.

Through investigation, police were able to identify the suspect as Jamaris Smith, 33, and arrested him early Thursday. Smith was charged with six different robberies on three different days:

Crum said Smith has one previous armed robbery conviction, as well as some fraud charges. They also charged him with two kidnappings, Crum said.

Someone robbed the same Walgreens on Thursday, Crum said, but that crime was unrelated and police are still looking for a suspect in the case.

“It’s a little scary. Maybe I should go to another Walgreens,” a man named Michael told Channel 9’s Hunter Sáenz on Friday after learning of the robberies. “I think we need to clean it up and figure out why all these robberies are happening and maybe get some extra security around the places where robberies are going on.”