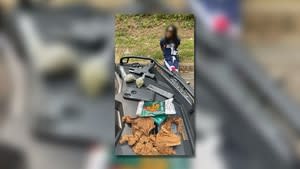 South Fulton City Police said a parent was suspected of bringing drugs into a park while there were children.

South Fulton park rangers were patrolling the area on Saturday afternoon when they were informed of possible illegal activity. The incident occurred during the ‘Welcome All Park’ for the opening day of youth football.

Police say parents told park rangers about another parent who possessed a gun and drugs while there were children.

A photo of the scene showed bags of marijuana along with a gun.

The park rangers said they do not tolerate the use of drugs in city parks.

Police say making sure parks remain safe and that everyone can enjoy them remains one of their top priorities.

ALSO READ  "I am a divorce coach, we are about to enter the bleak season"