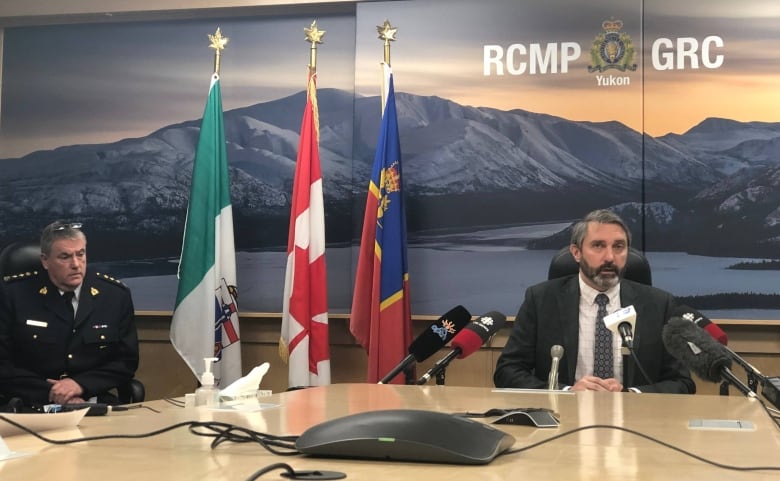 Two people have died, another is seriously injured and a man is in custody for murder, attempted murder and assault, after Tuesday’s shooting rocked the isolated community of Faro, Yukon.

Chief Superintendent Scott Sheppard, commander of the Yukon RCMP, told a press conference Wednesday afternoon that the shooting had taken place about 24 hours earlier and that a 42-year-old woman and a 73-year-old man had been killed. Another man was seriously injured, but his condition is stable, he said, refusing to name the victims out of respect for their families.

The suspect was taken into custody on Tuesday afternoon, Sheppard said, about an hour after the first shots were reported. He said the first call to the police concerned a family dispute.

Ralph Bernard Shaw of Faro, 61, has been charged with two counts of first degree murder, two counts of attempted murder and two counts of aggravated assault. He remains in custody and is due in court on November 3.

Sheppard provided few further details about the accused or what happened on Tuesday and did not say what type of weapon was used.

WATCH | The RCMP gave an update on the shooting in Faro on Wednesday:

“This is a tragic situation for the City of Faro and the Yukon as a whole, and as the situation evolves we are limited in what we say,” he said.

ALSO READ  Reforms Described by the Royal Commission on Aboriginal Peoples Were largely ignored, but its legacy lives on | Radio-Canada

“We intend not to compromise any aspect of this investigation.”

According to Sheppard, the investigation covers “several crime scenes” in Faro, located about 360 kilometers northeast of Whitehorse.

He said police received the first reports of gunfire just after 1 p.m. local time on Tuesday and went to a local residence where they found the man seriously injured, but the suspect was gone. .

Police then went to another residence and found the 42-year-old woman unconscious. Police and other members of the community tried to help the woman, but Sheppard said they quickly confirmed she was dead.

ALSO READ  COP26: Message from the Queen and other key moments from Day 1 of the World Climate Change Conference | Radio-Canada News

Police locked out the local school as a precaution, and soon after, new reports of gunshots fired elsewhere in the community. Sheppard said police visited the area, found the suspect and took him into custody at 1:56 p.m. without incident.

Sheppard said police then proceeded to another local residence where they found the 73-year-old man dead.

“All of our available resources were put to use in this investigation,” said Sheppard.

“No community, no matter how small, ever wants to endure this type of event.”

He said the Yukon RCMP are leading the investigation, with assistance from the BC RCMP.

“Our hearts are heavy. It is a very sad time for the Yukon, and we stand in solidarity with the people of Faro, ”said Silver.

“We know there is a lot of work to be done to determine what happened here and why. I want to encourage patience as the RCMP continue to investigate this situation.”

Jack Bowers was elected mayor of Faro last week and was originally scheduled to be sworn in on Tuesday night, but the ceremony has been postponed due to the shooting.

It touched the lives of everyone in the community. There were a lot of tears shed, but it also really brought us together. Sometimes tragedies do this.– Jack Bowers, newly elected mayor of Faro

He said on Wednesday that the community was trying to “move past” the tragedy and focus on healing.

“It touched the lives of everyone in the community. There were a lot of tears, but it also really brought us together. Sometimes tragedies do that,” Bowers said.

“The next few days will be difficult days, but days we will all go through.”

“It hits us all hard”

“Our hearts are with the community and the families of the injured victims as we wait to learn more about the incidents that have occurred,” New Yukon MP Brendan Hanley wrote in a Facebook post on Wednesday morning.

The mayor of Dawson City, Wayne Potoroka, indicated that the flags of the town hall of his community were at half mast “to honor the victims of Faro”.

“It hits us all hard. They are not alone with their grief,” Potoroka wrote.

The city of Whitehorse also tweeted on Wednesday that the flags of the city’s buildings were at half mast “to honor the victims of the tragic event” in Faro.

The flags of the City of Whitehorse facilities fly at half mast to honor the victims of the tragic event that took place Tuesday, October 26 in the community of Faro.

The Bharat Express News - November 28, 2021 0
Besieged Kenya Football Federation (FKF) President Nick Mwendwa has slammed the Sports Ministry for what he called maliciousness due to his back-to-back arrests in...