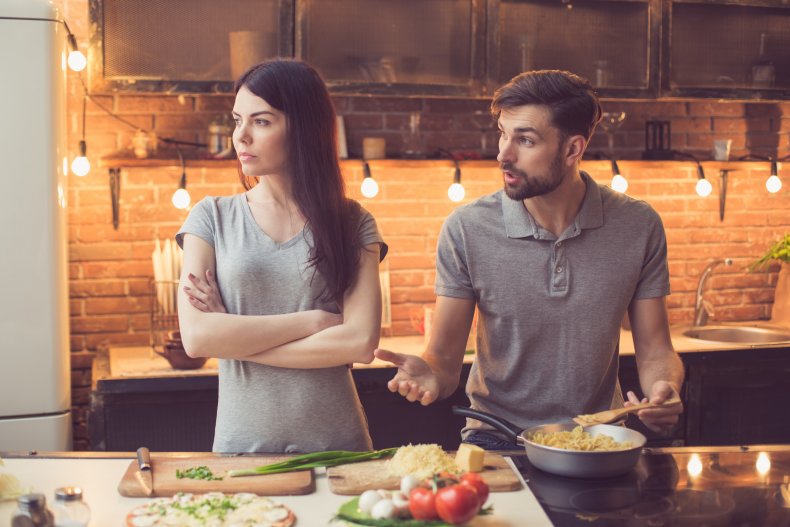 A man who served his girlfriend a pasta dish with whipped cream despite her lactose intolerance is being panned online.

The original poster (OP) says his girlfriend’s lactose intolerance is new, but serious. It’s worst with yogurt and milk, but other dairy products give her terrible gas and a “sick feeling in her throat.” She’s understandably cut all dairy from her diet, and while the OP says he’s not complaining, it makes cooking and eating out difficult due to her limitations.

Although they don’t live together, they have a regular date at her house on Wednesdays and with him on Sundays. They usually cook for each other on these days, but OP says her cooking hasn’t been great lately because of the non-dairy substitutes, but he understands the reason.

But when it was his turn to cook for her, he made her a pasta dish with a cream sauce. Although he warned her ahead of time to take a Lactaid tablet, she said she didn’t want the gas issues. He objected that the meal was difficult to make and that while he didn’t mind eating what she cooked on Wednesdays, he didn’t want to change his habits for her.

“A lot of dairy-free alternatives don’t taste as good (dairy-free cheese is terrible) and I see no point in changing my groceries for one meal if she can just take a Lactaid pill,” u/Ragenthrowaway wrote.

Instead, she left early in tears.

Lactose intolerance is often referred to as a dairy allergy, but that is not correct. A lactose intolerance means a person can’t digest lactose because their digestive system doesn’t make the required enzyme, lactase, according to WebMD. An allergy, on the other hand, means that a person’s immune system tries to attack the proteins in dairy. An allergy can lead to skin rashes, difficulty breathing, or even loss of consciousness, WebMD says.

In lactose intolerance, there are five main symptoms, according to the Mayo Clinic: diarrhea, nausea, stomach cramps, gas and bloating. While the symptoms may sound minor, they can cause severe pain. A woman was hospitalized when a coffee shop ignored her request for oat milk. However, another man who had an upset stomach after eating ice cream only thought he had lactose intolerance; it turned out to be a cancerous tumor.

While there is no cure for lactose intolerance, nutritional supplements — such as the aforementioned Lactaid — are available that can reduce the severity of symptoms, but may not help 100 percent of the time. The best course of action is to eliminate dairy from the diet, but that will only work if the lactose intolerant person sticks to the plan.

Reddit reprimanded the man for ignoring the cause of his girlfriend’s pain.

“[You’re the A**hole]. I’m lactose intolerant,” said u/danger_caterpillar in the top-rated comment with over 23,300 votes, before setting out five reasons why he was wrong:

“Finally, when she’s so strict about it, this condition hurts her and makes her feel very sick. Certain foods give her pain and discomfort that pills alone can’t always fix. You have to respect that,” they added.

“This! I’m lactose intolerant and the gas is very painful at times. Plus, a lactaid tablet can help me with something that has a little bit of cheese on it, but a whole sauce made of cream will get me no matter what enzymes I’m taking on,” agrees/KnittyKitty_91.

“I’m lactose intolerant and miss my gallbladder. ANY food these days with fats, oil, lactose, etc. Can cause me a screaming, screaming gas pain. I FEEL where the problem food is in my digestive tract. Then I’m married with the hours in the bathroom I feel so embarrassed afterwards, especially in the guest house because it can happen within 30 minutes of eating,” added u/CurlyMacabre.

“[You’re the A**hole]. Lactose intolerance / allergies can be debilitating and dangerous. And a lactaid pill is not an excuse to always eat things with dairy, but for situations where you can’t avoid dairy. Also, continuing to eat dairy or other foods to which you have an allergy/intolerance can cause leaky gut syndrome, IBS and other problems that can cause your friend to eventually lose parts of her small and/or large intestine,” u /Corsetbrat said. , adding that they had more than 20 years of experience in the field of nutrition.

The story has a happy ending. After reading all the comments, u/Ragenthrowaway432 realized he was wrong and apologized to his girlfriend.

“I complained [because] the switch to dairy-free was difficult, but I’m sure it’s much worse for her,” he wrote.