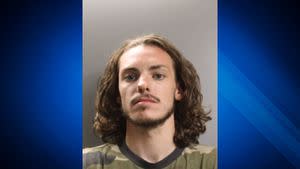 A man with a history of peeking at unsuspecting women was arrested on an arrest warrant following an incident in May where he allegedly included a woman in a bathroom cubicle.

Travis Demers, 24, of Manchester, NH, was taken into custody on Saturday and arraigned in Salem Court on Tuesday for breach of privacy.

Demers, is a registered sex offender and was held without bail in the Rockingham County Jail pending arraignment.

Police allege that on May 30, Demers admitted a woman using a bathroom cubicle at a business on Mall Road in Salem. The victim confronted Demers, who had put his cell phone under the shed divider, and gave a detailed description to the responding officers, law enforcement officials said.

Officer Matt Fitzgerald watched the surveillance video of the incident, Salem police say, and saw Demers hanging out near the woman’s restroom. Officer Fitzgerald was able to obtain a partial license plate of the suspect’s car and reduced it to Demers, according to police.