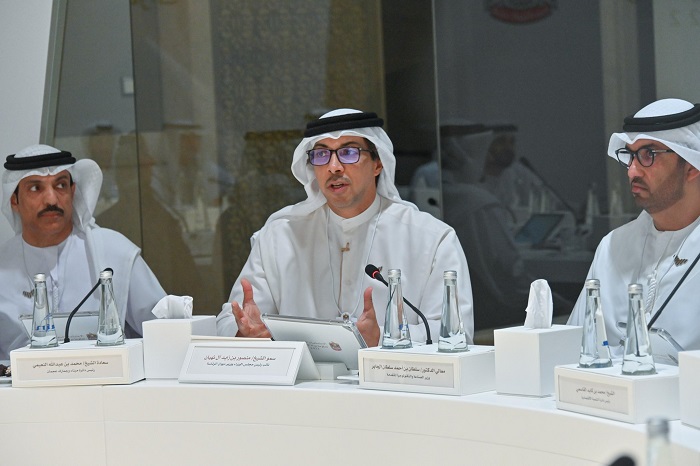 His Highness Sheikh Mansour bin Zayed Al Nahyan, Deputy Prime Minister and Minister of the Presidential Court, attended a government session that discussed the prospects for UAE food security and the promotion of the sustainable local agricultural production market, as part of the annual meetings of the UAE government 2022.
Her Excellency Maryam bint Mohammed Saeed Hareb Al Muhairi, Minister of Climate Change and Environment, stressed during the session that enhancing national food security is a pivotal pillar in the visions and directions of the UAE, through the development of a comprehensive system based on the foundations of employing advanced technology and launching initiatives and programs to enable local food production.

Maryam Al Muhairi said that the UAE seeks, through the programs and initiatives it launches, to bring about a radical change to achieve sustainable development of productive Emirati farms, which raises the country’s global competitiveness and transforms it into a global center for food security.
She added that the UAE government aims during the next stage to improve the income of Emirati farms and allocate 50% of government purchases related to food from local production by the end of 2023, by strengthening local production capabilities and stimulating investments in the food field.

ALSO READ  A man demands that an office refund 20,000 dirhams as a fee for hiring a sick maid

Government agencies allocate percentages of their purchases to local production.

The government agencies participating in the session signed a pledge to specify 50% of their food purchases, so that part of them would be from local production in the country, and to implement this pledge by the end of 2023, in support of the national product and intensification of government efforts.
The pledge also provided for continuing to raise this percentage annually so that the authorities can determine 70% of their purchases by 2025, to be from local production, until achieving the target of reaching 100% in 2030, to enhance the income of UAE farms, and to support food security programs.

The launch of the pledge comes as part of the annual meetings of the UAE government 2022, as an affirmation of its role as a national platform for unifying and harmonizing efforts, and a platform for promoting integration and cooperation to ensure the achievement of the goals of national strategies.

Participants in the government session discussed the importance of raising the country’s self-sufficiency rates for the main food items, in order to ensure the achievement of the country’s goals in enhancing future food security, and intensifying efforts in preserving the country’s food natural resources, in a way that guarantees enhancing its global competitiveness and raising local production levels in the region.

Participants reviewed the latest consumption data published by the Food and Agriculture Organization of the United Nations, which dealt with a comprehensive analysis of domestic consumption in the country, which exceeded more than 700 kilograms per capita annually, equivalent to 7 million tons annually, while local production provides about 14% of sufficiency. This is equivalent to one million tons annually.

They also discussed the most important challenges facing the local market in the country, the national farms, and the system of opportunities that they possess, in addition to focusing on the need to launch a package of supportive mechanisms and tools aimed at addressing the supply and demand sides, by strengthening the local production market, and improving the income of Emirati farms.

“Social Services” identifies 6 factors behind abuse of the elderly

Government report: Registration of commercial agencies in the country suffered 40 years of “stagnation and decline”