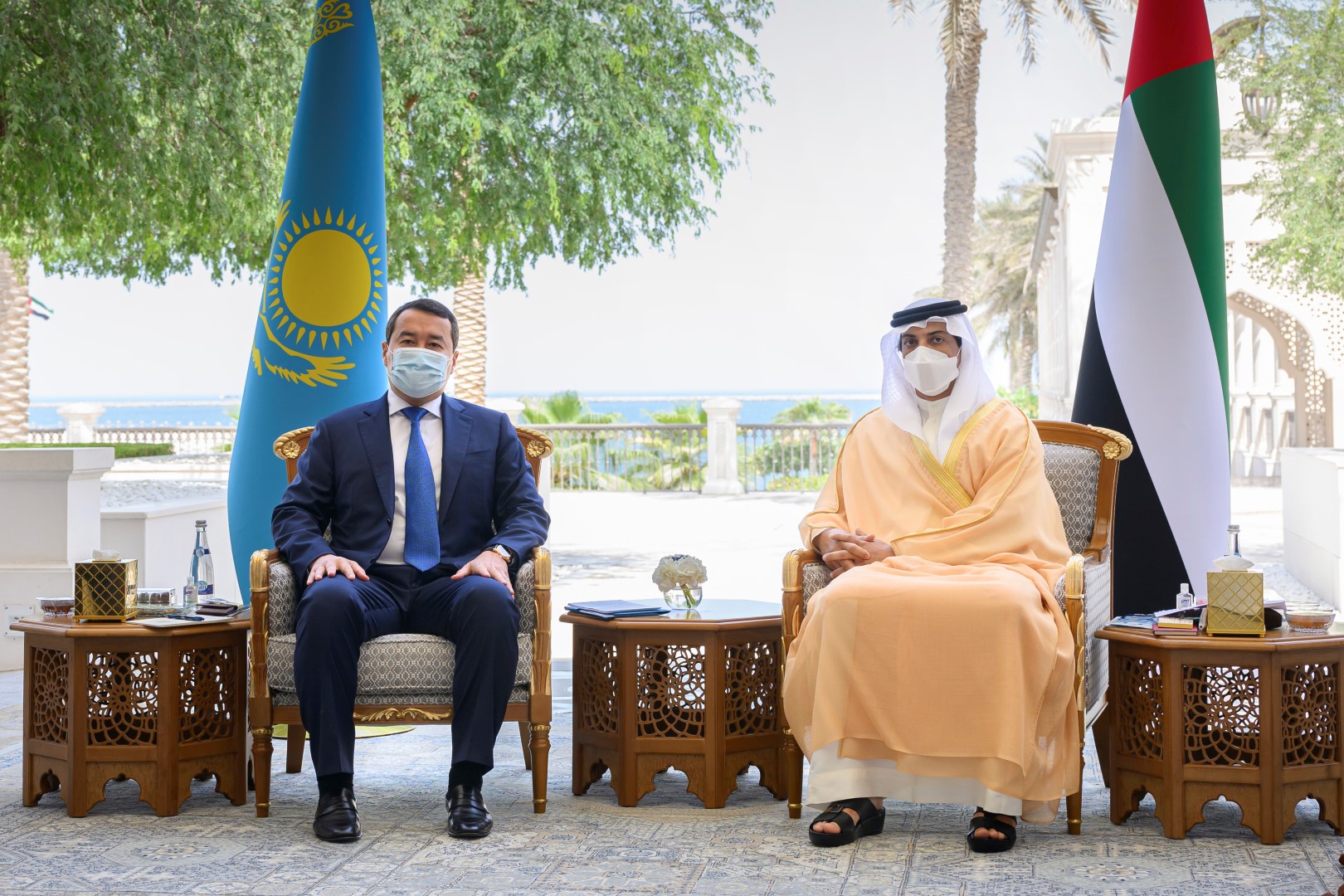 The meeting discussed ways to develop cooperation in all fields and sectors between the UAE and the Republic of Kazakhstan, in a way that supports progress, prosperity and development for the two friendly countries and peoples. The two sides also discussed a number of issues and files of common interest.

His Highness Sheikh Mansour bin Zayed Al Nahyan stressed the importance of the bilateral relations, the long-term strategic partnership and the distinguished cooperation between the UAE and Kazakhstan, adding that the wise leadership is keen to strengthen the ties of brotherhood and friendship that unite the two countries, in order to consolidate the values ​​of joint work and open promising future prospects.

His Highness wished Alikhan Smailov and his accompanying delegation a successful visit to the UAE, achieving its noble goals and objectives aimed at developing the relations of the two countries and launching development projects and joint investments.

His Highness Sheikh Mansour bin Zayed Al Nahyan and His Excellency Alekhan Smailov witnessed the exchange of 7 memoranda of understanding, cooperation and protocol between the United Arab Emirates and the Republic of Kazakhstan.

H.E. Suhail bin Muhammad Faraj Faris Al Mazrouei, Minister of Energy and Infrastructure, exchanged with H.E. Serikali Berkshev, Minister of Environment, Geology and Natural Resources of Kazakhstan, the road map for the implementation of the Memorandum of Understanding between the Ministry of Energy and Infrastructure of the State of the Emirates, the UAE, the UAE and the UAE.

His Excellency Suhail Mohammed Al Mazrouei, with the Kazakh Minister of Environment and Geology, also exchanged the charter of the “Green Bridge” partnership programme.

His Excellency Engineer Abdul Rahman Al Hammadi, Undersecretary of the Ministry of Education for Improving Performance, and His Excellency Chergaliev Kwanyesh, Deputy Minister of Science and Higher Education of Kazakhstan, exchanged a protocol on cooperation in the field of higher education.

His Excellency Abdullah Muhammad Al-Mazrouei, President of the Federation of Emirates Chambers, and Kairat Turibayev, Kazakh Deputy Minister of Trade and Integration, also exchanged a memorandum of cooperation between the Trade Policy Development Center – Shareholding Company “Qaz Trade” and “Gazfatrade”.

ALSO READ  Head of State: The UAE is witnessing a new development phase in which it attaches great importance to its global economic partnerships