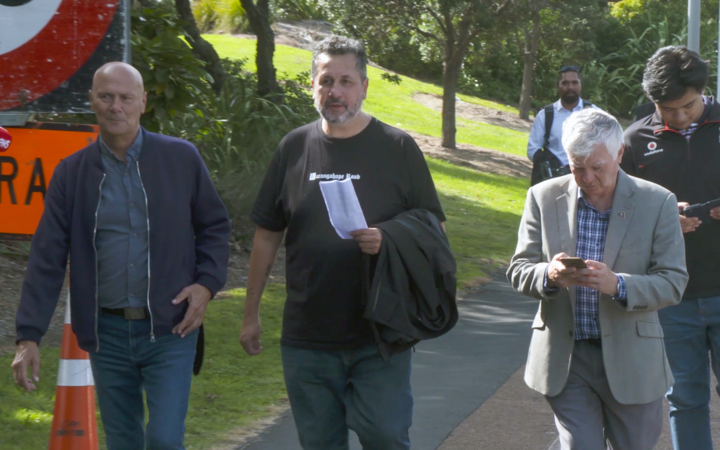 Senior Maori leaders and union leaders say the Auckland Ports boss must resign and should leave the post without payment.

In recent years, there have been three deaths at the port. In 2020 Pala’amo Kalati was crushed to death, while in 2018 Laboom Dyer died after the fall of the horseman he was driving, and in 2017 member of the public Leslie Gelberger was killed by a port ship while swimming.

The independent review that followed these deaths highlights systemic safety failures and suspected underreporting of accidents, with portworkers fearing to speak out.

Checkpoint was contacted by the wives of workers who fear conditions at the port, but say their husbands are afraid to speak out.

Despite this, general manager Tony Gibson refuses to walk.

“I am very surprised he did not leave,” said Shane Te Pou.

“We had two kaimahi, one member of a public deity, other kaimahi – other disabled workers. And from what we still believe last week, a kaimahi was very seriously injured on this same site.

Reid said Gibson shouldn’t be leaving just because of the deaths, but because of his comments on the back of the Independent Review, that he was unaware things were going so badly.

“What happened next was the GM said, ‘Oh, I didn’t really know this was going on, and I’m going to stay and fix it.’

“And the new health and safety law that came in after Pike River made it clear.”

Henare said one death at the port should have been enough for Gibson to get there, let alone three.

“[Chair] Bill Osborne should actually sit down with the GM today and say, ‘Your last day is Friday. See you later, we will bring in someone who has the means to put together a health and safety plan not only for the ports of Auckland, but also for the whanau ”.

“Where here as whānau. We are here as taxpayers, we are here like all kinds of things, because we believe that our whānau who work here today are under attack.”

Henare said there shouldn’t be an release package for Gibson.

“He should just get a month’s pay and get fucked in the ass. That’s what happens here. No employee gets a year’s pay. When they have to leave, they get a month’s pay, that’s all. C is what you and I would have. “

At the port office, the three executives briefly met with the CFO, where they delivered the letter calling on Gibson to surrender.

“It was basically a meeting with the CFO, saying this is the letter calling on the board to do the right thing.

“He told us that they were working on things, that he said he was as determined as we are to see change.

“And he will deliver this letter to the President later today.”

Auckland Ports Communications Officer Matt Ball said the letter has been received and the port is focused on implementing the recommendations from the health and safety review.

Reid said there would be more protests if the CEO refuses to march.