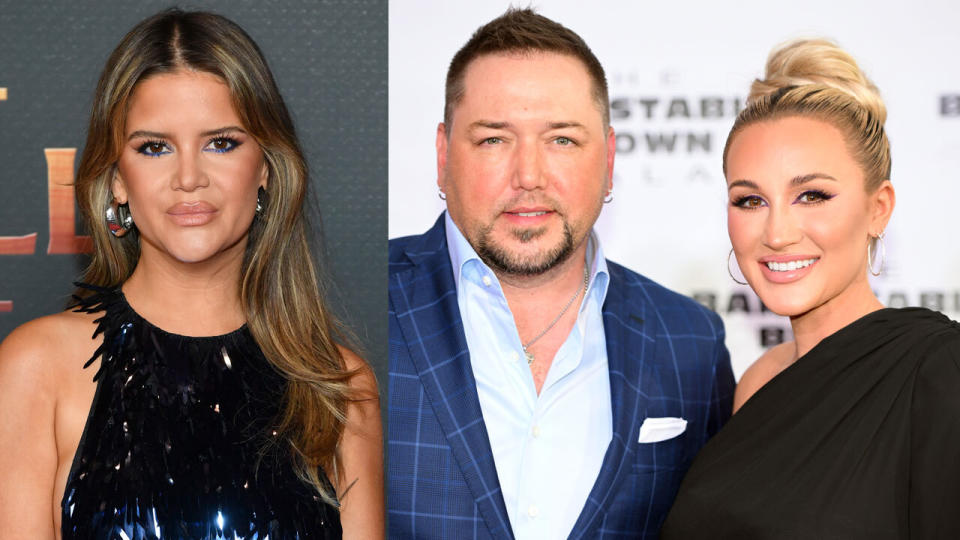 Maren Morris doesn’t regret calling out Jason and Brittany Aldean on social media, but that doesn’t mean she wants to sit next to them at an awards ceremony.

Morris, 32, spoke to the Los Angeles Times about her online feud with the conservative couple over transphobic comments they made, and how it fits into a bigger picture of what country music is all about right now. Morris said she hasn’t decided yet whether she will attend the Country Music Awards on November 9. humble questionst has been nominated for Album of the Year.

“I am very honored that my record has been nominated. But I don’t know if I feel [at] home there now. There will be so many people I love in that room, and maybe while playing I will make up my mind and go. But right now I don’t feel comfortable going,” Morris explained, adding, “I feel a little peaceful at the idea of ​​not going.”

Morris and singer Cassadee Pope spar with Brittany after an August 23 post that reads: “I really want to thank my parents for not changing my gender when I went through my tomboy phase. I love this girly life.” (Jason responded to the post: “Lmao!! I’m glad they didn’t either, because you and I wouldn’t have worked.”)

“The Bones” singer told the Time she didn’t run the message by anyone before hitting send.

“I just shot it off. I hate the feeling that I have to be the hall monitor to treat people like people in country music. It’s exhausting,” Morris said. “But there’s a very insidious culture of people who are very comfortable being transphobic and homophobic and racist, and that they can wrap it up in a joke and no one will ever call them out for it. It just becomes normal that people behave like this.”

The fact that Morris called Brittany “Insurrection Barbie” lit up social media, a nickname the singer stands behind.

“Well, it’s kind of true because the whole January 6 conspiracy theory, they’ve fully cooperated with that,” Morris said of the Aldeans. “Look, I’m not a victim in this and neither are they. But I have no feelings of kindness when it comes to people being fooled into questioning their identity, especially children. The whole ‘When they go low, we go high’ thing doesn’t work with these people. Any resistance movement isn’t done with kind words. And there are much worse things I could have called her.”

Morris, who shares a 2-year-old son with husband Ryan Hurd, said she felt the need to answer Brittany because of “the culture of misinformation that comes with trans youth”.

“This whole thing got so ugly so fast, because the worst thing they can say to me is, ‘Oh, then you must be a groomer.’ That’s literally their favorite word. I have a son, and I think we all – especially all parents – we just try to do our best and take care of our kids and make sure they are happy,” Morris continued. “You don’t know if one day they’re going to come home in tears because they don’t feel good in their bodies. And it just sucks for the parents going through that right now just kidding. The suicide rates are so high because of such hateful bulls***. I don’t care if it’s a joke. But they don’t want to talk about that part because it’s too real.”

Morris doesn’t believe she lost fans during the ordeal. (Hey, those Tucker Carlson-inspired shirts have raised over $150,000 for Trans Lifeline and GLAAD’s Transgender Media Program.)

“I’ve been very clear from the start. It sucks when artists stay quiet, stay quiet, stay quiet, and then they finally reach their breaking point and have to say something because something is so unjust or disgusting. And then they’re going to lose the half of their audience because they kept quiet. I’m trying to tell my husband this because he’s still building: Let people know where you stand,” Morris said. “Those who don’t get it fall away, but those who stay with you know what they’re contributing to.”

Jason, who previously wouldn’t talk about politics for years, threw that line out the window. He is an outspoken critic of President Joe Biden. Morris said that is “his prerogative.”

“And he probably knows, ‘Okay, I’m going to lose my Liberal fans,’ if he had any. But those who stay, I’m sure it makes them feel really close to him because of it all,” Morris noted. “And then I kind of have to step back and think, ‘What am I actually doing? Is it selfish? Is it performative? All the things a neurotic will think through. But I sleep pretty well at night knowing that people feel safer in my crowd.”

Morris said friends who don’t like country music ask her, “What the hell is going on in Nashville right now with these people?”

“I’m always like, ‘It’s less than you think.’ Sometimes I feel like I’m in this abusive relationship and keep defending it: “It’s not all bad!” But sometimes you have to call it what it is,” she said.

“I think there are people in country music who want it to be niche. They don’t want it to expand. They don’t care if it becomes more inclusive. It’s theirs, and everyone else is someone else, or awake , or whatever,” Morris continued. “That’s sad for me because I feel like country music is, at its core, people’s real stories. And to think there’s only one kind of person who can experience them and celebrate them isn’t why I chose to be there.” to live or music within those walls.”

Brandi Carlile recently told Morris what it feels like “there are two country music”.

“I don’t know, it should have been heartbreaking to hear that. But I was really relieved and encouraged to hear it. It made me feel, okay, country music at this mainstream level could definitely be two things, and I I’ve been trying to make one, and maybe I should stop,” she said. “I don’t know if Brandi meant it positively, but I took it that way. It was like a pressure relief.”

It’s Mexican Week on ‘The Great British Baking Show’. This is why some say an episode portrays “hurtful” stereotypes.

The Bharat Express News - October 8, 2022 0
Fifty-six people have been arrested in connection with the theft of nearly $5 million from hundreds of California residents in a widespread stolen check...