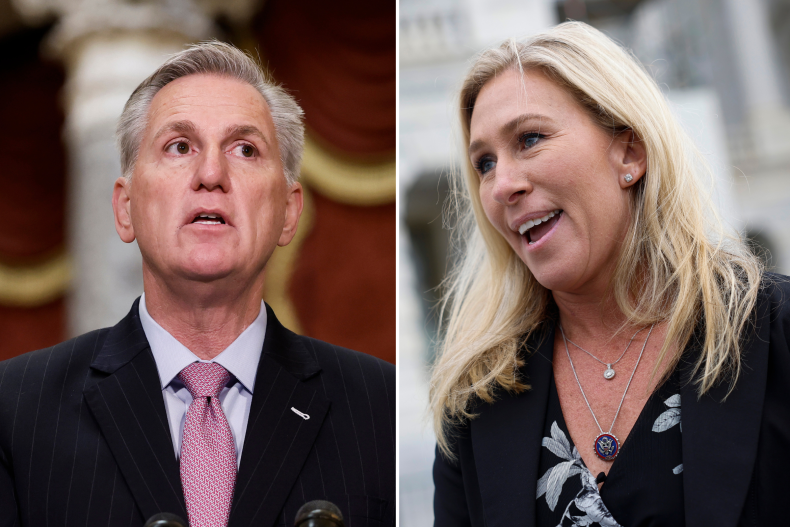 House Speaker Kevin McCarthy is not the most powerful Republican in Congress, according to Mary Trump, the niece of former President Donald Trump.

Instead, in a new interview this week, Mary Trump pointed to Representative Marjorie Taylor Greene, a Republican from Georgia, as the most powerful House Republican. Greene, who began her second term in the House last week, has gained national exposure for her right-wing policy stances and previous espousal of right-wing conspiracy theories.

The GOP lawmaker has emerged as the face of the conservative wing of the Republican Party, helping her shape the conservative stance on important issues while also becoming a top enemy of Democrats, who regularly criticize her for her many controversial remarks .

During an episode of her podcast The Mary Trump Show on Friday, the former president’s niece expressed concern about Greene’s influence over the GOP. Mary Trump, a vocal critic of the Republican Party, has used her platform to speak out against her uncle, who served as president from 2017 to 2021.

“She’s actually speaker of the House, let’s face it,” Mary Trump said. “In two years she has made herself the most powerful person – Republican – in the House of Representatives.”

During the discussion, Charlotte Clymer, her podcast guest, proclaimed the GOP’s support for Greene, which continued even though she had previously expressed her support for conspiracies. In a previous Facebook post, Greene touted an unfounded and anti-Semitic conspiracy theory that suggested the Rothschilds, a wealthy Jewish family, profited from wildfires supposedly caused by “lasers or blue light beams” from space.

“That’s the most anti-Semitic, just complete protocol of Elders of Zion bulls*** to come from a sitting congressman in recent history. The fact that she’s not only not in Congress, but just completely blacklisted state of public events everywhere is insane to me,” Clymer said, referring to Greene’s baseless claim.

However, Greene has tried to distance himself from some of these conspiracies, including QAnon.

“Like a lot of people today, I got easily sucked into some of the things I’d seen on the internet,” Greene said during an appearance on TBEN News earlier this month. “But that was handled quickly in the beginning. I never campaigned for those things. That wasn’t something I believed in. I didn’t run for Congress for that. Those are so far in the past.”

ALSO READ  2 US citizens killed in plane crash in Nepal

Despite Mary Trump’s claim, Greene is not generally seen as the most powerful House Republican. During her first term, a bipartisan coalition of Democrats and Republicans voted to remove her from her committee seats, which she only regained this month.

Yet many others have complained about her impact on the Republican Party. Former GOP Chairman Michael Steele said last month that Greene is likely to influence McCarthy’s decisions on issues important to the far right. Moreover, former GOP Representative Joe Walsh, a Republican from Illinois, shared that sentiment in an MSNBC interview last November.