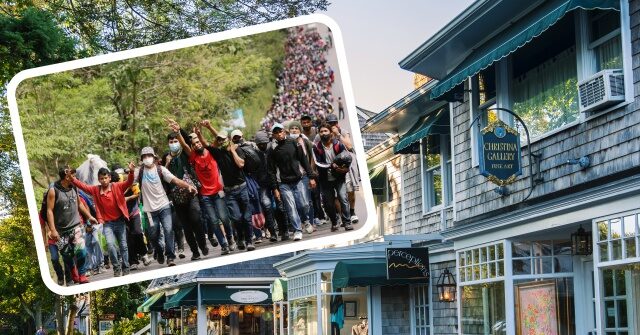 Entrepreneurs on Martha’s Vineyard have pleaded for years for more mass immigration to the United States in hopes of filling summer jobs with foreign workers.

When 50 illegal aliens were flown to the elite coastal island, home to the nation’s wealthiest and best-connected nations, officials declared a “humanitarian crisis” and Governor Charlie Baker (R) quickly deported the new arrivals to a military base on Cape Cod. .

The response to just 0.001 percent of the country’s border crisis arriving on the doorsteps of Martha’s Vineyard residents comes after business owners for years pleaded with the federal government to import more foreign workers so they could fill jobs.

“At some point they have to move from here to somewhere else. We don’t have the services to look after 50 immigrants,” an official said when the illegal aliens arrived. “We certainly don’t have any homes. We are in a housing crisis just like on this island, so we cannot accommodate everyone who lives and works here. We don’t have housing for another fifty people.”

In September 2018, a Martha’s Vineyard business owner complained to the… New York Times that he lost Jamaican workers and had to scrub toilets himself:

This summer, he was on his hands and knees scrubbing the toilets and bathtubs at Edgartown Commons, a hotel he manages on Martha’s Vineyard, Massachusetts. Five Jamaican workers who had long worked at the property were denied H2-B seasonal work visas.

“I am 65 years old, but you have to do what you have to do,” he said. “We have hired contract workers, but it will never be as good as people with years of experience.”

In August 2017, an owner of Martha’s Vineyard admitted to the… Wall Street Journal that he would rather hire foreign workers than local high school students:

Murdick’s manager Mike McCourt says he knows this is against the rules, but “it’s just part of the nature of the game here on the island. I can’t really defend myself except that it really fills a need.”

He says he prefers H-2B workers to college students, who go back to school before the summer season, and high school students, who he says don’t work as hard. American teens, he says, “know you need them more than they need you.”

The Washington Post had a similar story in August 2016 proclaiming that it is foreign workers, not Americans, who are driving the economy in Martha’s Vineyard:

On Martha’s Vineyard, they make the beds, stir fudge, and wash the dishes. “It’s the job Americans don’t want,” [21-year-old Romanian visa worker Timofti] says Flaviu. “We do the lifting, take the overtime – anything to make the trip worth it.” It is a common opinion among the students here. And privately, many local employers agree: “We certainly don’t see our compatriots working that much overtime,” said one.

In May 2018, the owners of Martha’s Vineyard businesses said they needed more foreign workers to fill summer jobs that were open and unfilled:

“It’s a crisis”, [retail store owner] said Mrs Tiernan. “I’ve had to work full-time on the floor, along with our two other owners, to keep the store open.”

Vineyard businesses, such as Mrs. Tiernan’s, depend on foreign seasonal workers to man their shops during the busy summer months. These workers come to the Vineyard on either J-1 student visas, which the United States grants to nonimmigrant students to promote cultural exchange, or H-2B visas. The H-2B visas are part of a nonimmigrant program that allows U.S. employers to temporarily hire foreign workers.

Other entrepreneurs on the island said the same thing a few months earlier to the Vineyard Gazette:

“I’ve never come across this before,” said Rob Hurst, general manager of Edgartown Commons, a 35-unit efficiency hotel that employs 10 to 11 people each summer. Five are housekeepers who typically work under an H-2B visa. This year, the hotel did not receive approvals for those visas, leaving Mr Hurst looking for workers as the busy season approaches.

“We need a different plan. Otherwise we can’t serve our guests and we wouldn’t be able to open,” he said.

Rather than give jobs to the illegal aliens, some officials said the island could not accommodate the newcomers and lacked the infrastructure. However, an analysis by Breitbart News shows that Martha’s Vineyard could house up to six million border crossings and illegal aliens.

Martha’s Vineyard could see an influx of illegal immigration, and therefore foreign workers, if Florida Governor Ron DeSantis (R) lives up to his promise to fly more illegal aliens to the island.