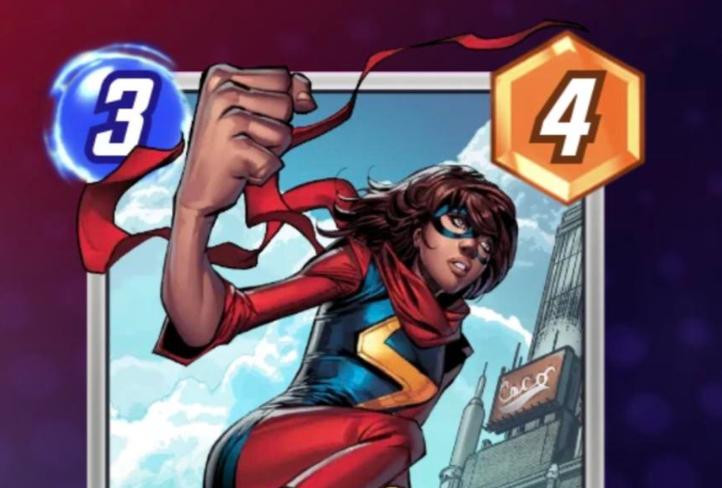 While most of the Marvel Universe’s heaviest hitters are already accounted for as cards in Marvel Snap, one high-profile hero has been left out for now. That would be Ms. Marvel, who recently got her own Disney Plus series and will star in The Marvels this year.

Now we’re getting our first look at Ms. Marvel when she comes to Marvel Snap, though I’m not exactly sure when that will be. It could be in July for The Marvels, or it could be sooner. Anyway, this is what she does:

Ms. Marvel (3/4) – Ongoing: If this is your only card here, adjacent locations have +5 strength.

So, with the flexible, expansive powers of Mr. Fantastic, she has a similar ability to him, albeit with a higher sacrifice to make. You cannot post each other cards in the lane with her, otherwise her effect becomes useless. And since you want to put her in the middle for maximum effect, that’s the job you’re likely to lose.

As a 3-drop, she could be buffed by Surfer. Wong-Surfer would give her 10 power in sololand. Wong-Mystique-Surfer would give her 16 power instead. So that could theoretically be a win if your opponent didn’t think he needed to do much to win that job. But even at baseline she is 14 total power for 3 energy. That’s pretty wild.

You can also arm her with Hulkbuster. You can send Green Goblin and Hobgoblin to her orbit. However, she will be vulnerable to Enchantress of Rogue where she cannot be protected by Cosmo. She can’t be polished by something like Onslaught. She will be vulnerable to Aero and Magneto. All in all, she seems like an interesting card. I wonder if she’s going to be the main battle pass offering since Marvel Snap generally tends to pick a pretty important character to star in the battle pass, and they tend to make them pretty useful. That was true for Miles Morales, Black Panther and Silver Surfer. Zabu is… lesser known, admittedly. But very convenient.

Given the amount of debates she’s already sparking about whether or not she’ll be useful, I suspect she’ll eventually see a lot of play as decks try to work with her terms. She sounds pretty neat to me, and I’m curious to see how she may or may not fit into the meta, when she arrives.