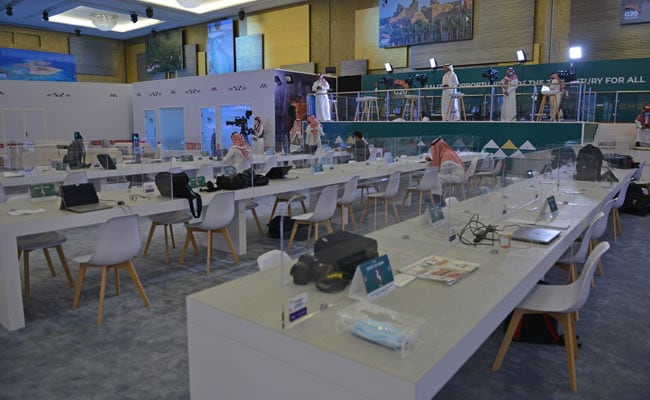 The pandemic has reduced the annual gathering of world leaders to a massive webinar.

Masked journalists showed up at a ballroom-turned-media center in Riyadh on Saturday after mandatory temperature checks, to physically cover a virtual G20 summit originally intended as a big exit party for Arabia Arabia.

The media room at the capital’s Crown Plaza hotel would have been filled with hundreds of international journalists had it not been for the coronavirus pandemic that reduced the annual gathering of world leaders to a giant webinar.

As the summit opened, the handful of foreign media in attendance pointed their cameras at a large, glittering screen where world leaders appeared in multiple small windows – one shuffling newspapers, another calling for technical help, and a casually chatting with an assistant.

For Saudi Arabia, the first Arab country to host the summit, the media center – a cavernous, chandelier-strewn room filled with mostly unoccupied workstations – is emblematic of a missed opportunity to showcase its ambitious modernization effort.

“It is an act of God,” said Adel al-Jubeir, the kingdom’s minister of state for foreign affairs, referring to the pandemic that made a physical summit impossible.

The austere kingdom has undergone a radical transformation over the past three years: the driving ban for women has been lifted, movie theaters have reopened, and social mixing of the sexes has become increasingly common as religious police once dreaded had become toothless.

“It would have been good if thousands of people came to Saudi Arabia, walk the streets, meet Saudi men and women, see the changes that have taken place in the country, feel the changes,” Jubeir said during a press briefing before the summit.

A physical summit would also have been an opportunity to highlight the tourism potential of the kingdom – the new “white oil” that the petro-state wants to develop to diversify its income.

Saudi Arabia is blessed with breathtaking landscapes, but tourism remains a tough sell in a country with strict social codes and an absolute ban on alcohol.

Yet the government has sought to make the most of the physical media hub.

Adorned with portraits of Saudi destinations, the center could be mistaken for a tourism fair.

The livery waiters offered four different types of Arabian coffee – each from a different corner of the kingdom.

Coffee table books touting Saudi culinary delights have been placed alongside guidebooks to destinations such as the historic town of Al Ula and the hill station of Abha – places of immense natural beauty but little known outside the country.

The kingdom hosted a media dinner on the eve of the summit in the historic town of Diriyah, near Riyadh and known for its traditional mud-brick architecture.

Dressed in loose traditional thobes and tight daggers, the dancers swayed and swayed amid the ruins.

To highlight other government plans, journalists were offered official interviews and briefings on the sidelines of the summit that were unrelated to the G20 – including Saudi ministers of education and sports.

And as global activists sought to draw attention to the kingdom’s human rights record, the government seemed determined not to let the issue overshadow the forum.

During one of these briefings, Investment Minister Khalid al-Falih was asked whether negative headlines – including those about the gruesome murder of journalist Jamal Khashoggi in 2018 at the Saudi consulate in Istanbul – had detracted from investment potential.

In a country where officials are not used to tough questions from reporters, the moderator asked the reporter to take the matter elsewhere.

But Falih insisted on responding.

“Investors are not journalists, investors are looking for countries where they can trust an effective government that has proper economic decision-making,” he shrugged.

Pak still caught 19 most wanted terrorists, even 12 years after the 11/26 attack