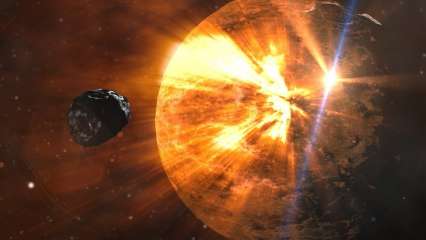 Comets pass through the solar system less frequently. The enormous comet falling towards the Sun, a discovery that had turned heads in the astronomical community, is estimated to be nearly 150 km in diameter.

Two astronomers discovered what may be the largest comet ever spotted in the solar system earlier this year. This giant of outer space has been called the “nearly spherical cow of comets,” according to a new study by the same experts.

Early studies estimated the comet’s diameter at 125 miles (200 kilometers), but a new study published in The Astrophysical Journal Letters and shared in written format on the online website arXiv on Monday brought it closer to 93 miles ( 150 km).

The discovery was made by examining information recorded by the Dark Energy Survey conducted earlier in 2021.

Astronomer Will Gater has created a collection of images of other important objects in the solar system to give an idea of ​​the magnitude of this huge floating snowball.

This giant comet is much larger than the larger moon of Mars and even the combined size of the two moons of Mars put side by side.

ALSO READ  What is DeFi and how to use it

Comet C / 2014 UN271 is the comet’s official name, but it is commonly known as comet Bernardinelli-Bernstein after its discoverers, Pedro Bernardinelli and Gary Bernstein, both of the University of Pennsylvania.

This massive comet is unlikely to strike Earth, but it is on its way to the inner solar system and will pass the Sun in 2031.

This size still implies a mass ten times greater than that of Comet Hale-Bopp, nicknamed the “Great Comet of 1997” because of its magnitude.

ALSO READ  Teleport me! William Shatner could go to space aboard the Blue Origin rocket

In the years to come, there will be several discoveries and revelations from astronomers. Indeed, a recent revelation has already emerged when the Las Cumbres Observatory noticed an unexpected flash and an increase in brightness earlier this month.

It’s time to get used to pronouncing Bernardinelli-Bernstein because it’s a name that will be heard a lot more in the years to come.