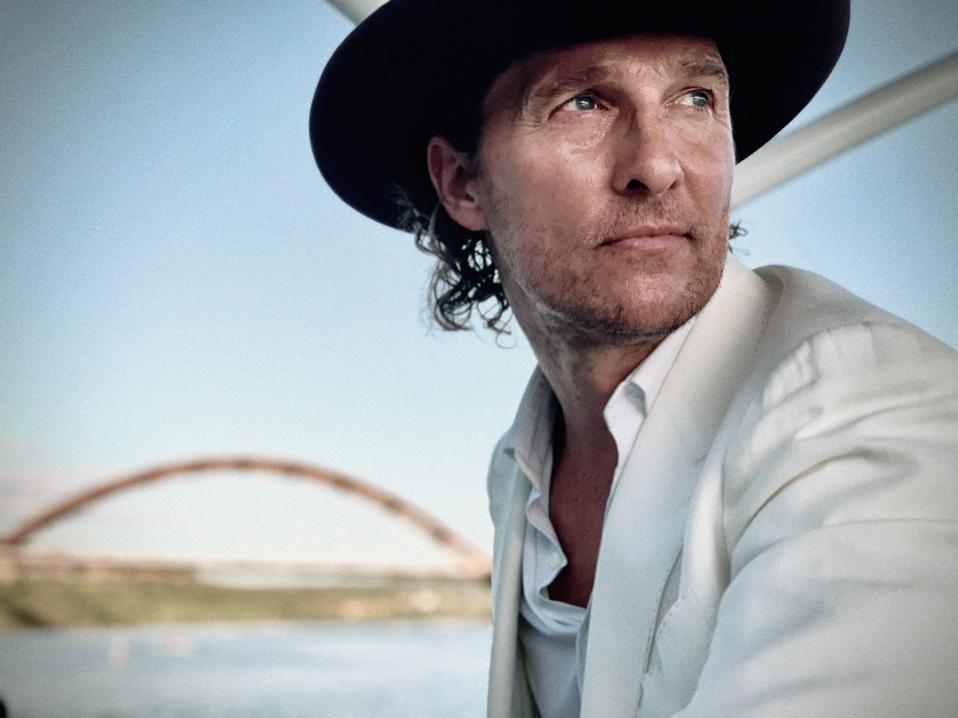 It all started with Ziploc bags. Inside each, the fragmented collection of journals, briefcases, tape recordings, and travel trinkets that Matthew McConaughey had stored since his teenage years is once again discovered. As the Oscar-winning actor began to unbox them, he found himself transported once again to his past – to Texas, Australia, Malibu and the troubled waters of the Amazon.

This week, as Father’s Day approaches, I sat down with McConaughey to talk about these adventures, many of which are recounted in his new book, “Greenlights”.

Joe Sills: Let’s talk about “Greenlights”. I don’t know if you’ve decided to write a travel book, but for me it’s a travel book.

Joe Sills: It is this compilation of incredible events throughout your life that you have kind of had the foresight to write and record. Did you know that by writing these things they would one day become a book?

Matthew McConaughey: I had no idea they would become a book, but I had a hunch that I would be careful – and it was worth it – to keep writing them, that one day I might be able to look at them and find some common threads. from what I have learned in life … what worked and what didn’t.

I had a good discipline to write things down, whether it was with a Sharpie on my arm or notes that I would photograph, or a napkin, a coaster, a recording on a tape or writing in my journal. Over the years my office got full and I found time to put things in a Ziploc. Four or five years ago I said, “Let’s go open this treasure chest of all these newspapers and see what you have.

Joe Sills: In some cases, you crack that seal and you’re back in your head decades ago. How was it?

Matthew McConaughey: It was quite intimidating. I didn’t know if I was going to like what I saw. It was embarrassing at times. Sometimes I shook my head in shame. But then, as I got in, I started to notice that it was funnier than I thought. The things I thought I was going to be embarrassed about, I laughed at myself.

Maybe I was able to laugh because I had learned this life lesson, or maybe some of the offenses I had committed were still re-offending. Some of the things I felt ashamed of, had forgiven myself or realized it was time to do it.

Probably the coolest thing was seeing that the things I wrote about when I was 15 – the topics I was interested in – still interested me at 50. How does the world work? What’s my relationship there? What is an idiosyncrasy of someone that I found funny?

I always wrote these things down so that I wouldn’t forget them at that time. When I looked back I realized that I actually remembered more than I forgot.

Joe Sills: One of the things that surprised me about this book is that you spent a long time living in a van and traveling across America. It is after you have become a well-known person in society. Tell me how it was.

Matthew McConaughey: I had lived in Hollywood for a little while. I have succeeded. I still needed to audition for some roles, but a lot of the roles were blind offers to me for the success I already had. People knew what kind of work I would do, so I got offers without having to audition.

I’m at a point in my life where I don’t really meet strangers. Everyone knows my name and has a preconceived idea of ​​who I am. I didn’t feel like I was seeing real and honest behavior.

This van was my front row seat. It was my acting class, spending time with myself and other strangers if I wanted to.

I wanted to create resistance for myself. You see it from the trip to Africa to the trip to the Amazon to America in a van. The idea was, “Go where no one knows your name and see if you can push yourself around. See what you can get. I wanted to give myself these very basic and practical challenges like crashing on the freeway or having a flat tire and you don’t have an AAA card and you don’t have OnStar.

On the road, that’s where I found these challenges. Plus, I got to see some of the great comedians in the world who didn’t know they were comedians.

The things people say about trailer park life … They’re fleeting anyway, so we were like sailors on the American highways. The trailer park is like your harbor. You stop for a while, you don’t have to say your name or show your ID.

I liked being a bit undercover, but I also thought it was cool that if someone saw me in the trailer park, maybe they thought they were on Mars for a second.

Joe Sills: What is a green light for you?

It’s a literal version of a highway green light.

A yellow light encounters a problem that requires you to stop and take a break. A red light stops you in your tracks.

I discovered that in some ways I had created green lights in my own life. I took sacrifices today that would give me more freedom in the future. This is where the title comes from.

Joe Sills: Can you give us an example?

Matthew McConaughey: Right from the start, how to be a good friend. When I was a good friend, I would go out on my own to do something for someone else when they needed it, even if it was going to take a bit of my time or I would rather do something else. I noticed that when I did this, these friends came back later in life when I needed them. I noticed they were in the world for me when I wasn’t even there. They opened the way for good fortune and good word for the future, which opened up more opportunities for me and gave me more freedom.

Sometimes it was choosing little things like not gossiping about someone else when they weren’t around. Yes, I could create a green light at that point, but as soon as I leave this person I was talking to, I will lose all respect for myself. They’ll find that if I make noise to you when you’re not around, I could do the same to them. Then I lose a potential ally in this world.

Preparation. Like a job interview, so you don’t show up sweating and saying, “I’m completely unprepared.” Yeah, I could have had a good time and had a drink with my friends on Friday. It was a green light then, but now I’m on a red light.

Joe Sills: You now come on set with a script entirely in Spanish.

Matthew McConaughey: Yes. And it’s a monologue for me!

Joe Sills: There are so many fun stories in “Greenlights” that made me laugh, but I want to tell you about a red light. I want to talk to you about your father. You are on the set of “Dazed and Confused” and this is your first big break. Then he left. Is it a red light?

Joe Sills: What was it like to balance that professional high with the low of the day?

Matthew McConaughey: So, I’ve been working on my first acting gig for five days. I’m as high as I can get, I mean personally as excited as I’ve ever been in my life. I’m 21, feel like I’m doing something I’m good at, and have an innate ability to do. People tell me I’m good at it.

Then dad. Boom. He dies.

At that time, as much as it was a personal highlight in my life to be able to act, there was no issue that mattered more. My father passed away: “Okay. Drop it. I’m out of here. I’m not asking for permission. I have to go back home.

I really didn’t think about the acting game I had to do. It was pain, loss and confusion. I didn’t think my father could be killed. I thought he was the abominable snowman. I had never even considered him not to be alive in this lifetime. It was the bear of a man who had an immune system like a viking.

Yeah, he was living fully and living hard, but he wasn’t about to leave this world – not in my eyes. Then all of a sudden he was gone. Out of the blue. Boom.

You know, death tires me so much. Even to this day, I go to the hospital and take narcoleptics. So when daddy died, I passed out on the kitchen counter as we talked about daddy’s death. My mom and brothers were still talking, then I would wake up and pick up where they left off.

We had a vigil, which he wanted. Friends have come from all over the country for its wake. I am here. I am the youngest son of 21, the idealist who held my father and what he taught me about it. This weekend I started learning that lesson you learn when you lose a parent. I learned that there was a difference between the message and the messenger.

Joe Sills: Finally, you come back to the set. Do you feel like you’re acting for him then? Are you pushing forward for him now?

Matthew McConaughey: In a sense. My healings were more firmly on the ground after dad died. I think they were pretty firmly there even while I was acting as Wooderson. But now, that’s where the green light of a major red light like this comes in.

Now the biggest thing that ever happened to me in my life at that time – this thing that I love to do and get paid for, which five days ago has become the most important thing in my life – becomes second place. My father’s death was more important.

What does it mean? Does that mean that something with as much significance as this great opportunity that I was living, playing, was number two? I would say I became a better actor that day.

This interview has been edited for length and clarity.

How to travel the world through design with this British brand