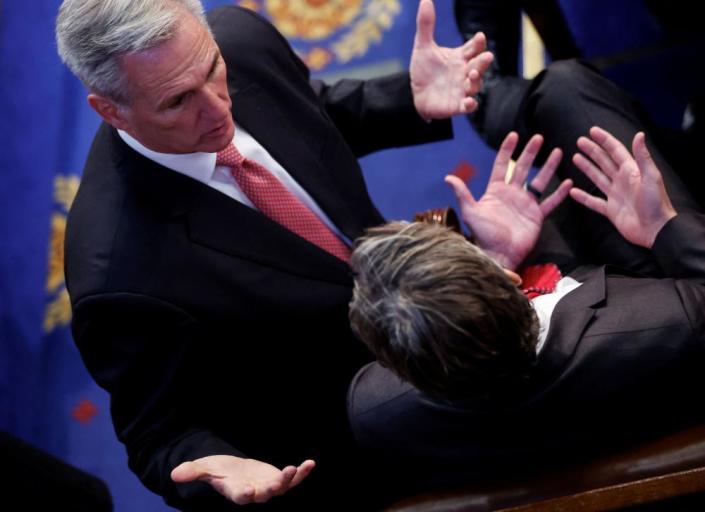 The 118th Congress made history again Thursday, when House Republican leader Kevin McCarthy failed to win the speakership for the 11th time after eight hours of voting. The protracted stalemate marks the first time since 1859 that the House needs more than nine ballots to determine a new speaker.

McCarthy entered the third day of voting with fresh impetus for his candidacy amid reports that he had made significant concessions to his 20 or so opponents within the Republican conference.

But the ongoing negotiations failed to sway McCarthy’s critics, who continued to oppose him by three votes on Thursday. McCarthy won 200 votes on the ninth ballot, leaving him 18 votes short of the 218 needed for a win.

Related: House Republicans are trying to rein in the ethics body that is preparing to investigate their party

There were a number of surprises in the voting on Thursday. Far-right Congressman Matt Gaetz, a Republican from Florida, has voted twice for Donald Trump. Since the U.S. Constitution does not specify that the speaker of the House must be a member of the chamber, legislators are not required to endorse one of their peers. Trump received no other votes.

Another of McCarthy’s opponents, Congresswoman Lauren Boebert of Colorado, nominated Congressman Kevin Hern of Oklahoma on the ninth ballot. Hern, the chairman of the Republican study committee, won the support of several members in the last three rounds of voting, even though he himself remained in McCarthy’s corner. Gaetz switched from supporting Trump to Hern for the ninth and tenth votes.

Thursday’s proceedings marked the third consecutive day of voting in the election of speakers. The House stalled on the speakership three times on Wednesday, following the three unclear votes held the day before. Instead of voting for a fourth time on Wednesday, members moved to adjourn until evening, giving McCarthy’s team more time to negotiate with his Republican opponents.

Even the evening brought no solution, so the chamber met again to adjourn again until the next afternoon. It is the first time in a century that the House has not chosen a speaker on the first ballot.

In a first glimmer of hope for McCarthy’s prospects, most staunch Republicans supported his decision to postpone the session until Thursday afternoon. The final vote on the measure was 216-214, as Democrats and a few Republicans tried but failed to keep the chamber in session.

First-year Congressman John James, a Republican from Michigan, celebrated the successful motion to adjourn as a “small victory” when he reappointed McCarthy Thursday. But House Democratic caucus chairman Pete Aguilar scoffed at James’ boasting as a telltale sign of Republican dysfunction.

“There is no victory in suspension without doing the business of the people,” Aguilar said as he nominates Democratic leader Hakeem Jeffries.

Republican opposition to McCarthy has remained remarkably stable, even after the opponents reportedly won some key victories in their negotiations. According to CNN, McCarthy has agreed to a room rule change that allows only one member of the House to call for a vote to remove the incumbent speaker. McCarthy also reportedly agreed to allow additional members of the far-right House Freedom Caucus to serve on influential rule committees, and has promised votes on some of the opponents’ key legislative priorities.

In another big win for far-right members of the House, the McCarthy-aligned Pac Congressional Leadership Fund has reached an agreement with the organization Club for Growth not to invest in open-seat primaries in safe Republican districts. The two groups previously clashed in primaries where the Club for Growth promoted candidates further to the right than those endorsed by the CLF. The agreement could give hard-right candidates a better chance at a primary victory, paving the way for them to enter the House after winning a relatively easy general election.

But the concessions don’t seem to have affected McCarthy’s critics within the conference yet. Congressman Scott Perry, chairman of the House Freedom Caucus and a leader of the anti-McCarthy coalition, expressed frustration that details of the concessions had been leaked to the press.

“A deal is NOT done. When confidentiality is breached and leaks are targeted, it is even harder to trust,” Perry said Thursday afternoon. “I will not succumb to the status quo.”

McCarthy can only afford to lose the support of four Republicans and still become speaker, assuming all 434 current House members vote. If some of McCarthy’s opponents choose to vote “present” instead, the victory threshold could be lower than 218.

McCarthy’s allies complained that the deadlock is already affecting their constituents, as all House business has ground to a halt until a speaker is selected.

“My office was informed today by an agency that they are unable to communicate with my staff on pending matters as we have not yet been sworn in,” said Congressman Don Bacon, a Republican from Nebraska. “The handful blocking the speaker election is not helping Americans, but directly hurting them.

But McCarthy’s critics have shown no leniency, instead celebrating the ongoing deadlock as a sign of vigorous debate.

“This consultation is healthy”, said Congressman Andy Biggs, a Republican from Arizona. “The House should always be so involved instead of stamping all the bills that come through.”

Despite the Republican division, the Democrats have remained united in supporting their newly elected leader. Jeffries has received the support of all 212 members of the Democratic caucus on all ballots, making him the best vote-getter in the election of speaker to date.

At a press conference on Thursday, Jeffries implored Republicans to reach a consensus in the best interest of the nation.

“It is my hope that today House Republicans will end the bickering, gossiping and backstabbing of each other so we can have the back of the American people,” Jeffries said. “We as Democrats are ready, willing and able to work with them to find common ground whenever and wherever possible – not as Democrats, not as Republicans, as Americans. It is time for Congress to get to work.”