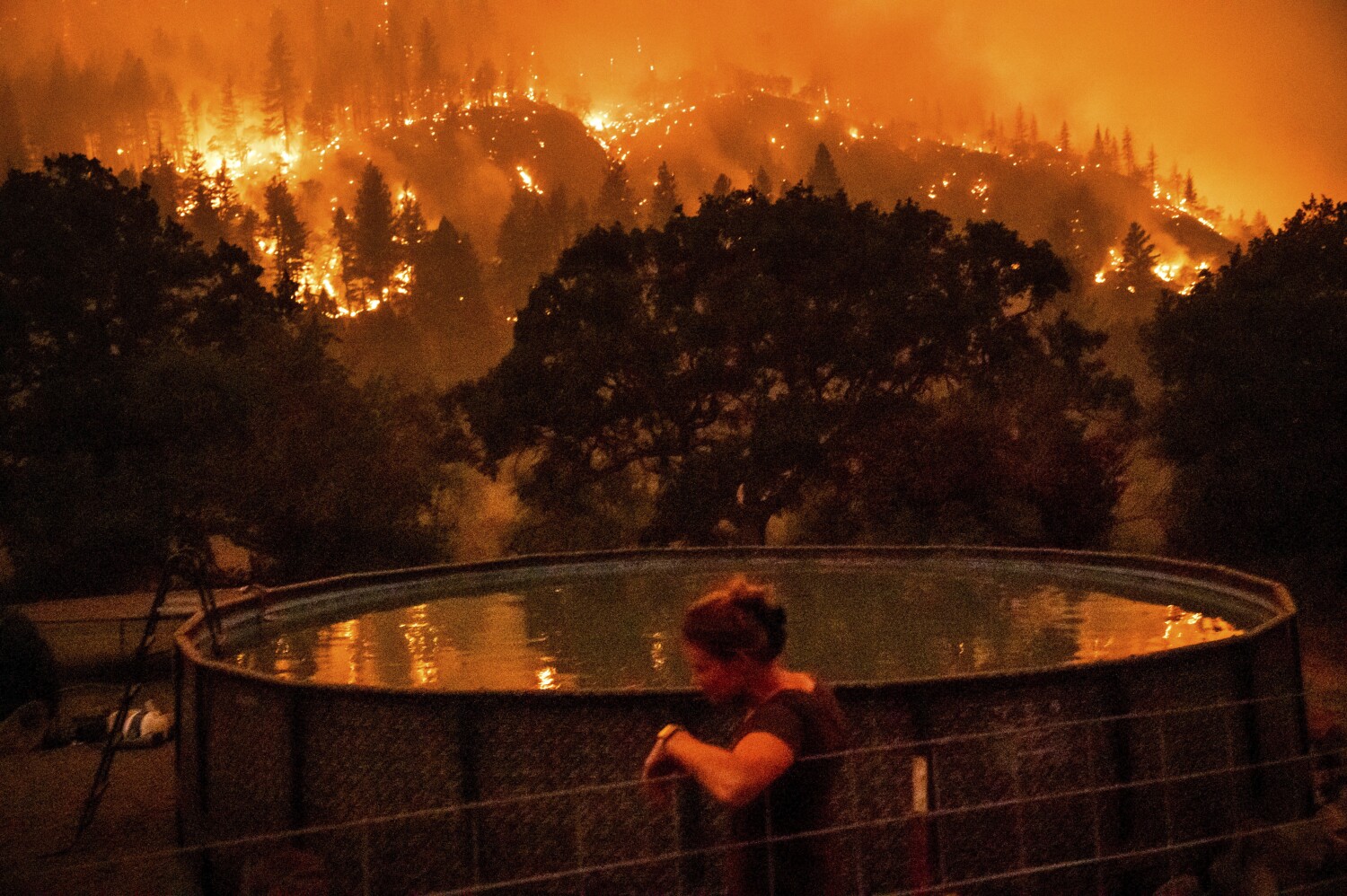 In the 20 years they’ve lived in Yreka, Vina Swenson and her husband have packed their car and prepared it for fire five times – twice in the past two years.

“We’ve never had to leave,” Swenson said Sunday, as the flames burned less than five miles away. “So the reality probably didn’t hit me” that this one could engulf their house.

By Sunday morning, the McKinney fire — the largest so far of this year’s fire season in drought-stricken California — had destroyed more than 51,468 acres in Klamath National Forest near California’s border with Oregon, destroying homes and threatening hundreds more. It was 0% curtailed.

Swenson, 54, watched as firefighters cut brush across the street from her home, which sits in a basin surrounded by heavily forested mountains in the Northridge neighborhood, right in the city’s evacuation zone. The sun tried to peer through the smoke, coloring her neighborhood an uncanny orange.

“It’s reassuring that they’re protecting us, but the fact that they’re clearing scrub here makes me think they expect the fire to get here,” Swenson said. She said they would leave as soon as they see flames coming over the surrounding mountains.

About 650 firefighters fighting the blaze faced triple-digit heat and possible thunderstorms that could create dangerous conditions. A red flag warning was in effect amid scorching temperatures, which averaged around 100 degrees on Sunday, officials said.

“The fire is getting more energetic and the chances of fire spreading are increasing,” said Jonathan Garner, a meteorologist with the National Weather Service. “It just becomes a more active fire when the temperatures warm up like that.”

Thunderstorms were expected in the afternoon, which he said could cause gusts of wind and lightning, which could ignite new fires.

All this leads to unpredictable fire behaviour. “And that’s dangerous for firefighters,” Garner said.

Sunday afternoon, forest officials said, there were about 10 other smaller fires in Klamath National Forest.

One of the firefighters on the front line is Tyler Johnson, 21, who checked in with his mother, Diane, Sunday morning before going on duty.

That’s their routine, she said. At the end of his break, he calls to say he’s on his way to the command center and then back into battle.

“It’s just a short ‘I love you, be safe,'” Diane Johnson said, her voice faltering.

The 49-year-old county planner had been evacuated about a four-and-a-half hour drive to Placerville. Her husband, a sheriff’s deputy, stayed behind to assist with the evacuations in Yreka and to ensure that homes are not looted.

Some neighborhoods on the west side of Yreka were ordered to evacuate, although officials said they saw little progress overnight on the edge of the fire, closest to the city.

“Certainly Yreka is a concern, as are other populated areas like Fort Jones,” said Caroline Quintanilla, spokesperson for the US Forest Service. “So we’re focused on protecting people, life and property.”

Officials said firefighters on Sunday gave priority to protecting Fort Jones, Yreka and other communities in the Highway 96 corridor from the blaze, which could burn for weeks. Highway 96 was closed along the Klamath River, where crews worked overnight to prevent houses and buildings from burning down, forest officials said in a social media update.

“This area gets a lot of fires,” Quintanilla said. “But the specific area where the fire is actually burning hasn’t burned down since the mid-1950s. So that’s also part of the concern, and part of the complexity, because it hasn’t burned for a long time.”

Jonathan Dixon, 37, who lives on the western outskirts of Yreka, told The Times his home will likely be one of the first to be scorched as the fire continues to spread.

He said he has fled to the Bay Area and that he expects his collection of Art Nouveau antiques, sculptures and other works of art to be lost.

“I’m terrified my house is going to burn down, and I’ve more or less accepted it,” Dixon said.

Dixon, a card dealer and gaming supervisor at the local casino, tried to put a positive spin on his losses by saying that he was “some kind of hoarder” and that he intended to put things away.

“That’s a problem that has been solved, but not in the way I wanted,” he said.

Still, he said the casino may also have to close, and if that happens, he could lose his house and a source of income. He urges other unwilling relatives to leave Yreka as soon as possible and refrain from trying to save their belongings.

“I told them not to worry about packing, your life is more important, get out of here,” Dixon said.

Many residents in this Humbug Road neighborhood are elderly, Dixon said, and are likely to encounter major hurdles if they try to leave.

Jan Williamson, 66, fled her home in the Northridge borough along with her husband and 40-year-old daughter Leanne, a quadriplegic with cerebral palsy.

Williamson said the evacuation was particularly difficult for Leanne as she is severely autistic and agitated as her daily routines of watching TV and listening to music are disrupted. The Williamsons have had to isolate themselves in their motorhome because of the heavy smoke in the air.

Trapped and unable to talk, Leanne tends to bite herself “hard and often” when frustrated, her mother said.

Jan Williamson and her husband have had to leave behind a slew of equipment used to care for their daughter, including an electric lift system that takes her from the bed to the bathroom.

“If it’s that bad, we just have to take one or two minutes at a time and get through every day,” said Jan Williamson.

The Red Cross opened a shelter in the town of Weed late Saturday after closing the Yreka site when the area was ordered to evacuate, said Stephen Walsh, a spokesman for the organization.

Twenty-two people are staying at the shelter, where they receive beds, food and spiritual care, Walsh said.

“They can stay as long as they need to, and of course the shelters are open to everyone,” he said.

Siskiyou County officials have set up a web page to help residents locate dogs, cats and livestock rescued in the evacuation area. The animals were cared for in different shelters.

The fire started around 2:38 p.m. Friday near Highway 96 and McKinney Creek Road southwest of the Klamath River, according to the California Department of Forestry and Fire Protection. The cause is being investigated.