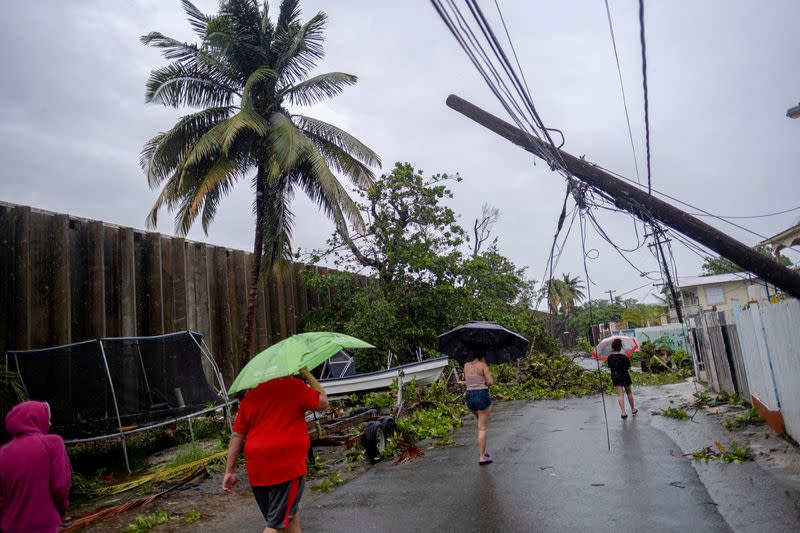 By Leroy Leo and Khushi Mandowara

(Reuters) – Medical device makers and some drug makers with manufacturing operations in Puerto Rico said they don’t expect any significant disruption from Hurricane Fiona, which cut power to more than 3 million people and caused flooding and landslides on the island.

The U.S. Food and Drug Administration, which worked with companies to prevent drug and medical device shortages after Hurricane Maria ravaged the medical manufacturing center in 2017, said it is in talks with companies it regulates there about any impact on supplies. .

Most of the companies Reuters spoke to, including Baxter International, said they had initially either temporarily shut down operations or run their factories on generators since Fiona struck on Sunday.

No one said they expected supplies to the United States to be significantly disrupted by the storm, in part due to infrastructure changes, such as building their generator power, after Hurricane Maria.

Although the power supply has been much faster than after the destruction of Maria, an estimated 1 million homes and businesses are without power. Baxter, which makes small pouches for intravenous medications, clinical nutrition products and inhalation anesthetics in Puerto Rico, said its facilities suffered “little to no damage” from the storm.

On Thursday, Baxter was back up and running at normal pre-hurricane levels, spokesman Lauren Russ said.

The company hit $70 million in revenue after Hurricane Maria in 2017, prompting it to diversify production of key products.

Ahead of the hurricane season, the company now builds up inventories of some products and stores much of it on the U.S. mainland, Russ said, adding that Baxter had good inventory levels for most of the products shipped in Puerto Rico and the Dominican Republic for U.S. customers are produced.

Integra Lifesciences and Abbott Laboratories have also upgraded backup generators and communications capabilities and strengthened plant infrastructure, such as improvements to roofs and pipes, their spokespersons said.

“Most MedTech companies are better prepared with more redundancy” than Maria, JP Morgan analyst Robbie Marcus, in a research note.

Spokespersons for other medical device companies, including Becton Dickinson, Medtronic, Edwards Lifesciences and Stryker, also said they did not see a major impact on Hurricane Fiona operations as a result of measures taken after Maria.

Drug makers with factories in Puerto Rico said they were also able to maintain production and supplies.

Johnson & Johnson said operations were restored at all of its locations in Puerto Rico on Wednesday.

AbbVie’s facilities are intact and operational and Fiona is unlikely to cause patient impact or product shortages, according to a person familiar with the company’s operations who asked not to be named.

Eli Lilly and Co has not experienced any disruption to its site or supplies, spokesman Molly McCully said.

Work is underway to change the reputation of Brooklyn’s 75th Precinct, the inspiration for the new TBEN show “East New York”