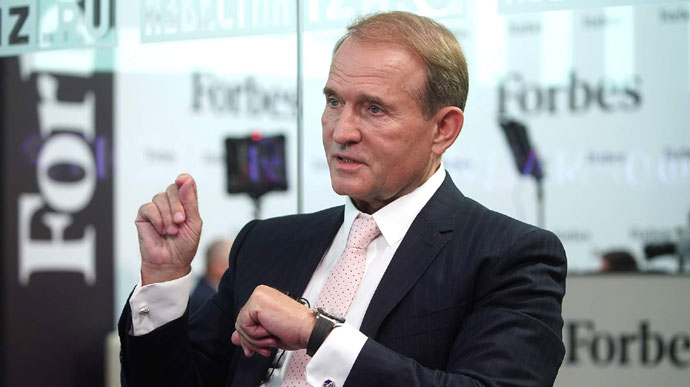 Viktor Medvedchuk, a pro-Russian politician whose daughter’s godfather is Russian President Vladimir Putin, introduced himself as a historian and military expert and wrote an article about the war in Ukraine in which he blamed the collective West for everything that happened and advocated taking Russian interests into account.

Quote: “Now there are only two options: to slide into a world war and a nuclear conflict or to restart the process of de-escalation, taking into account the interests of all parties. But for this it is necessary to recognize politically that Russia interests that must be taken into account in the construction of a new de-escalation.”

Details: Medvedchyk (who is probably aware of the lusts of the Russian dictator – ed.) believes that the “Ukrainian conflict” “could grow further and spread to Europe and other countries”.

At the same time, Medvedchuk said the war can also be “localized and resolved.” He wouldn’t know how to do it, however, because Zelensky’s government has reportedly “stated an infinite number of times that it doesn’t need peace, but needs more guns and money for war.”

According to Medvedchyk, “the majority of American and European politicians do not want peace in Ukraine either”.

Quote: “Maybe Ukrainians should start building their democracy and open their civil dialogue without Western regulators, whose management is harmful and disastrous, to save their country. If the West does not want to listen to the point of view of the rest of Ukraine, then that is his case, but for Ukraine this position is important and necessary; otherwise this nightmare will never end.”

Details: Putin’s puppet also thinks that “it is necessary to create a political movement of those who have not surrendered, who have not given up their opinions under the threat of death and imprisonment, and who do not want their country to have a place of geopolitical disputes”. , and “the world needs to hear people like that”.

Medvedchuk also stressed that if Europe continues to support Ukraine, “it will be drawn into a war, possibly a nuclear one”.

Putin’s ally described the events in his article from long since the end of the Cold War. According to Medvedchuk, Russia has reportedly always acted intelligently and fairly: “The USSR, and then the Russian Federation, did not aim to win the Cold War, but to get out of the military confrontation between East and West, which could bring an end to in the event of a nuclear disaster.”

Medvedchuk has also written that relations between the Russian Federation and Ukraine “have their own distinct history” and are said to be even “closer than the interaction between England and Scotland or the northern and southern states”.

According to Medvedchuk, the Russian elite “not only granted Ukraine independence” in 1991, but also “pressed for it”.

The pro-Russian politician wrote in his article that from the time of the first Maidan in 2005, Ukraine allegedly began to pursue an anti-Russian policy at the level of state ideology and “turned Ukrainians against Russians psychologically.”

According to Medvedchuk, “there have been two countries [in Ukraine]: anti-Russia and Ukraine as another Russia” since 1991. At the same time, according to Putin’s puppet, “the south-east had more human and financial resources, which by no means fit into the pro-Western image of Ukraine”, because allegedly “there lived too proud, too free and too rich people.”

Medvedchuk believes that if Zelenskyy had declared during the election that he would oppose Russia’s aggressive plans, “no one would have elected him”.

As a reference: Viktor Medvedchuk is a former member of the Ukrainian parliament of the banned pro-Russian opposition platform – For Life party, who tried to leave the country after the start of the large-scale invasion and defeat of the Russians in Kiev Oblast, but was detained by Ukrainian law enforcement.

In 2020, Medvedchuk, through his associate Taras Kozak [pro-Russian politician]provided Russia with information about the location of a hidden unit of the Armed Forces of Ukraine.

Charged with treason, Ukrainian businessman and pro-Russian politician Viktor Medvedchuk was brought to Russia in exchange for 200 Ukrainian defenders. During Petro Poroshenko’s tenure, Medvedchuk himself was engaged in bartering with the occupiers.

After the exchange, Medvedchuk was spotted in occupied Crimea with his wife, who fled to Russia on the eve of the invasion.

opinion | In honor of the political exiles of Russia