According to Mwaura, Wanyonyi contacted him in 2009 and asked for help to get a job after being rejected by many potential employers because of his disability.

“I remember Martin came for the interview. I took him through the process. He failed terribly, almost all the questions, he was completely wrong. However, I told him he failed the interview, but I’ll give him the job,” Mwaura told me.

ALSO READ  UNESCO Announces Vacancies with Salary Up to Ksh450K; How to apply?

In Mwaura’s words, Wanyonyi seemed harassed but determined when he went for the interview.

“He lived in the slums of Kangemi and he had tried to get a job but every door he knocked he was discriminated against and rejected because he was a person living with albinism. His spirit was very low and he asked if I could help him find a job,” said Mwaura.

Wanyoyi was reportedly 1 year behind the legislator in high school. After the interview, he became a member of the Albinism Society of Kenya.

ALSO READ  Details on Mwai Kibaki's will being challenged in court

Notably, Mwaura reiterated his ambition to protect mentors living with albinism, which was dubbed a “spectacle” at the time.

“As a pioneer, I inspired my young brothers every morning that they would record it one day after me,” Mwaura announced.

His interaction with a renowned politician propelled his political career forward.

“I am very happy to witness the success of what I dreamed of, dreams are indeed valid. I hope Martin takes over the leadership of the Kenya Disability Parliamentary Association (KEDIPA), the first-ever caucus of MPs with disabilities that I in the Kenyan Parliament,” added a proud Mwaura.

Wanyonyi, 37, was first nominated as an MCA in 2013 and retained his seat in 2017 after being elected as an independent candidate.

In the closed polls of 9 August, he was elected Webuye East MP with 11,600 votes, beating his closest opponent Iyaya Wanjala, who received 4,200 votes. 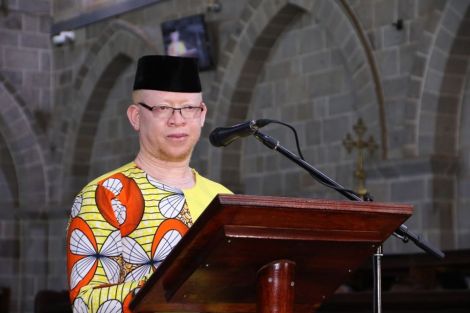