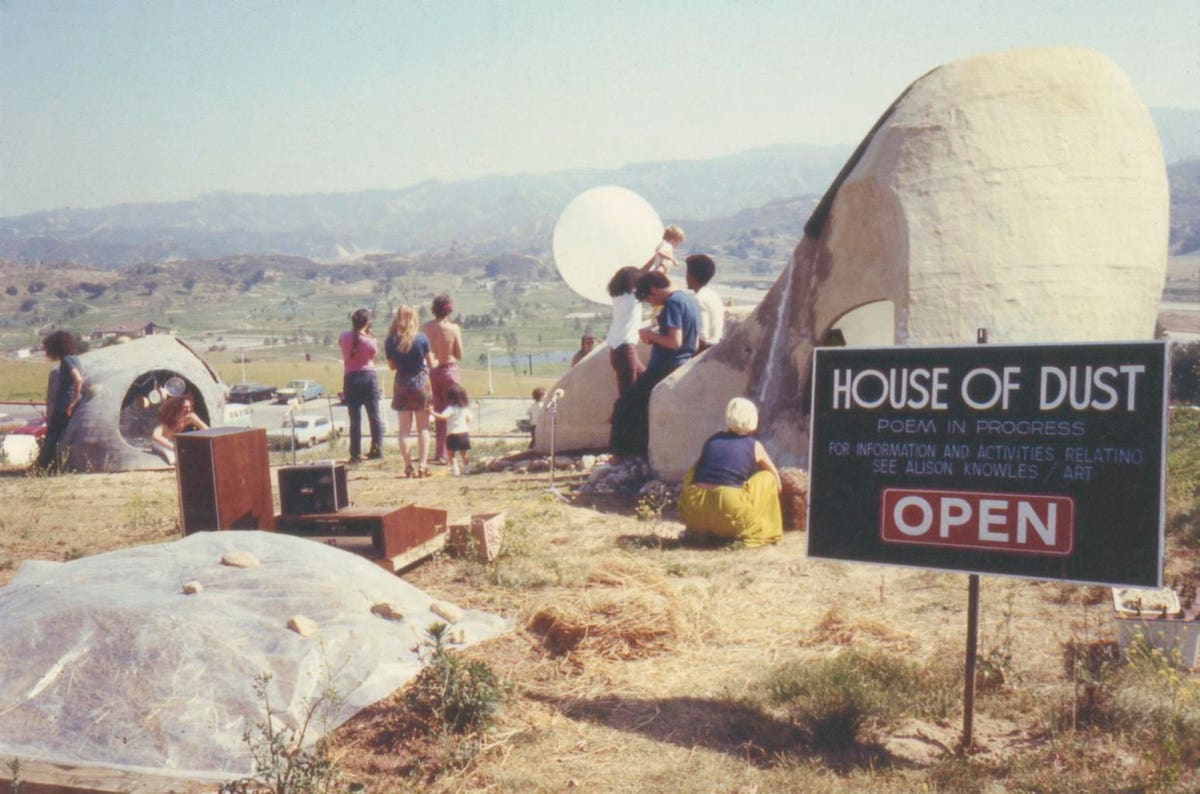 From the Guggenheim Museum to the Seagram Building, Manhattan had a long reputation as an island of avant-garde architecture when Alison Knowles first built the House of Dust in Chelsea. Founded in 1967 and standing for less than a year, its structure is almost unknown today, yet it was more radical than anything ever conceived by Frank Lloyd Wright or Ludwig Mies van der Rohe.

Technically, the house was not designed by Knowles. Rather, it was generated by a computer, which used the Fortran programming language to describe hypothetical architecture by randomly selecting attributes from a list Knowles provided to her collaborator, the computer music pioneer James Tenney. The software generated hundreds of permutations, performed in the form of a poem. Knowles selected the following quatrain: “A House of Plastic / In a Metropolis / Using Natural Light / Inhabited by People from all Walks of Life.”

Knowles, founder of Fluxus and one of the few Fluxus artists alive today, has only recently begun to draw attention to her work at a level that collaborators like George Brecht have enjoyed for decades. This month, recognition culminates with an extensive retrospective at the Berkeley Art Museum and Pacific Film Archive (BAMPFA). There are many revelations, including silkscreen paintings created before Andy Warhol started using the technique. But her most important work remains the House of Dust.

Knowles’ 1960s architecture was innovative for the technology she used, but what was most groundbreaking was the way she treated the built environment performatively. Before making her home, she engaged in the Fluxus practice of creating event scores, simple instructions for creating a work of art. The instructions were usually simple enough for anyone to follow, a tactic that demystified the creative act. For example, Knowles composed a score reading “make a salad”. The score has been performed countless times since 1962, when she first performed the work at the Institute of Contemporary Art in London.

In a sense, the House of Dust was an event score that Knowles composed for a computer performing random operations. From another perspective, it was a series of event scores compiled by the computer and executed by Knowles through construction. But Knowles didn’t see the house she built as static. Rather, the house was an event in itself, to be performed by the people who inhabit it.

Full realization of the event had to wait until Knowles moved from New York to Southern California, where she took a teaching position at the California Institute of the Arts. There she decided to perform one more of the architectural permutations and build her house “On open ground / lit by natural light / inhabited by friends and enemies”. The house became a space where she held classes and meditation sessions, and where artists and composers responded to the structure with events of their own composition. More generally, the House of Dust served as an open score that invited variations on the art of living.

The idea that architecture scores residents’ behavior had antecedents in Frank Lloyd Wright’s modernist homes, whose design was guided in part by the way he envisioned his clients’ future activities. And the German Bauhaus advocated behavioral research on a more formal level, especially in the buildings designed by Hannes Meyer, who led the Bauhaus before Mies van der Rohe.

But Knowles offered something more dynamic. From the standpoint of professional architectural practice, the closest equivalent was a methodology developed by Lawrence and Anna Halprin in San Francisco during the same period Knowles taught in Valencia. Anna was a choreographer whose work included composing Fluxus event scores. Lawrence was the architect of innovative developments such as Sea Ranch. Together, in the late 1960s, they developed an approach for communities to score their own urban infrastructure by performing a series of loosely orchestrated actions in open spaces. The result was intended to guide planners and builders.

The Halprins’ collective work ultimately influenced artists more than architects, especially through the publication of a book called The RSVP Cycles. The influence on dance, for example, has been great.

Perhaps because it was never formalized as a methodology, or translated into a meta-score for intermediate practice, Knowles’s remarkable approach to art and life has had less discernible impact. While her House of Dust is being excavated to be inhabited by a new generation, and her way of working is explained by art historians, her all-encompassing way of interactivity screams to be applied in surprising new ways.

It’s easy enough to get started. Just make a salad.

This tour group wants to turn your dreams into new experiences

Boutique Hospitality Has A New Luxury Player Everyone Should Know. Meet Method Co.