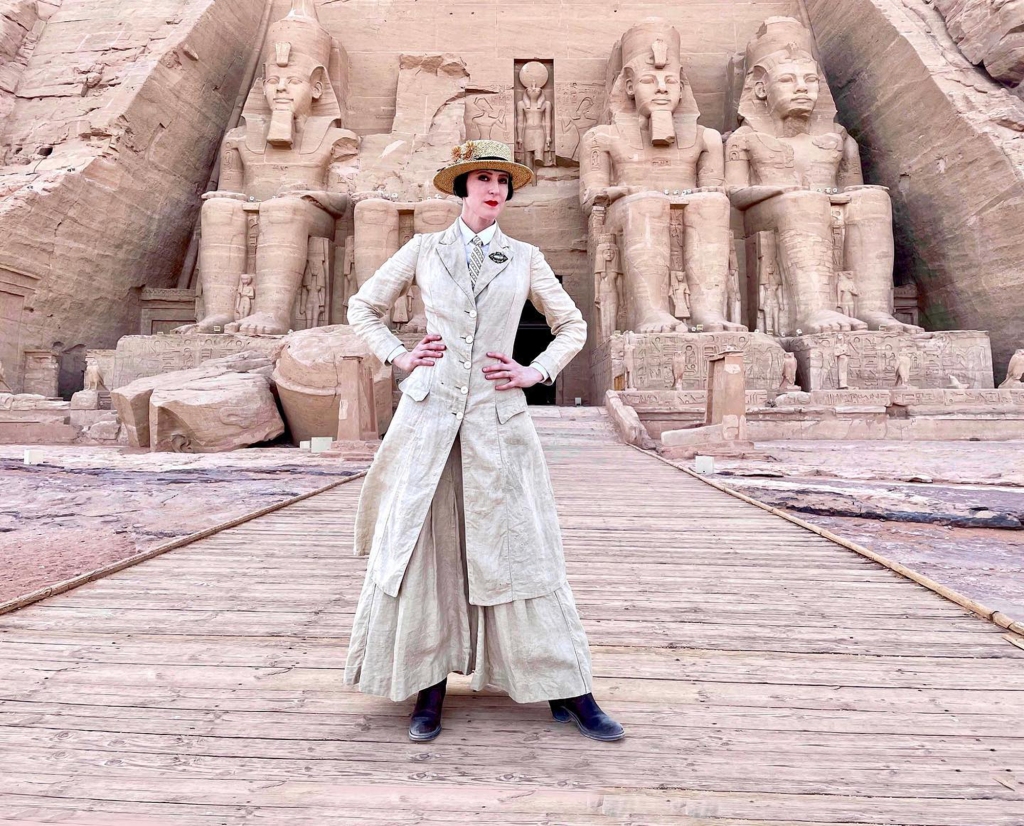 During a recent stroll through the Metropolitan Museum of Art’s Egyptian collection, historian Colleen Darnell and her partner, Yale professor John Darnell, stopped at a relic from the reign of sun-worshiping pharaoh Akhenaten and his wife Nefertiti. “They are so fascinating,” said Colleen. “And very rarely are [the two] discussed together.”

Akhenaten and Nefertiti tried to remake Egypt’s religion and identity. But when their son Tutankhamun became pharaoh in 1332 BC, at the age of 9, he disavowed his polarizing parents. In less than a decade, King Tut’s advisors had destroyed nearly all traces of the glittering, controversial couple and the new capital city they had built, erasing them from the historical record.

The Darnells took up the ancient rulers for their new book “Egypt’s Golden Couple: When Akhenaten and Nefertiti Were Gods on Earth” (St. Martin’s Press). They drew on historical records, artwork and their own archeological discoveries to shed light on this chronically misunderstood duo who, they argued, ruled as a pair and changed the course of Egyptian history.

But this husband-and-wife Egyptology team, based in Durham, Conn., are not your typical academics. And they have the detractors to prove it.

The Darnells look like they could have stepped out of an Agatha Christie novel or an Indiana Jones movie. During the visit to the Met, Colleen — who teaches art history at the University of Hartford and Naugatuck Valley Community College — wore a 1930s brown rayon dress with matching capelet and a feathered cloche. She kept her black hair in a sleek Cleopatra-like bob. John modeled a blue three-piece double-breasted suit from the late ‘30s or early ‘40s, which he accessorized with a vintage printed tie and bowler hat. An elegant plaid Inverness cape was draped over his shoulders.

At one point, he took out a monocle.

Their style made the Darnells attractions themselves, outshining the statues and artifacts. Other visitors stared at them; some smiled. A few asked them if there was a reason they were dressed like they had time-traveled to 2022 from some other era.

“We dress like this every day,” Colleen, 42, said, flashing a charming smile.

Vintage looks are the duo’s brand. Their Instagram account, @vintage_egyptologist, has some 227,000 followers and even draws sponsorships, turning these academics into social media stars: They are Egytology’s modern-day Golden Couple.

And like Akhenaten and Nefertiti — also masters of self-presentation, depicting themselves as luminous twin androgynes — the Drs. Darnell are flashy, fabulous and controversial.

The couple are known for excavating ancient ruins in jodhpurs, spats and pith helmets. They don white-tie formal wear for “vintage” Nile River cruises. They dance the Charleston in flapper finery. They sometimes drive a 1923 Model T. Even their dogs are antique: Basenjis, an Ancient Egyptian breed.

They take pains to connect every Instagram photo or reel back to Egypt, even if it’s a video of Colleen at the midcentury modernist TWA Hotel dressed in Space Age 1960s wear — including a topless swimsuit and pasties. (The video is set to swinging ’60s spy-movie music, which, Colleen writes, “resonates with what we know about military intelligence in ancient Egypt.”)

“[It’s] a way to catalog [our vintage] pieces, share photos and talk about Egyptology at the same time,” John, 60, said.

From the outside, the Darnells’ marriage of vintage and Egyptology can feel like schtick. But they maintain that wearing an outfit from the past makes them better historians.

“You really get to experience what some earlier period was like,” John said, since, say, a 1920s dress shirt with a stitch front makes the wearer move and interact with the world differently. “If you can get these insights by wearing something that’s 100 years [old] … it becomes a little easier [to imagine] what we can and cannot know about ancient societies.”

John has worn vintage since he was a child in Alabama. His school-teacher mom — who introduced the future professor to Egyptology by reading him her archeology textbooks during naptime — dressed him in old-timey duds.

“I really liked plus-fours at a very early age,” he said, referring to ballooning cropped pants. “I don’t like pants flopping around my ankles.”

Colleen, who is not shy about sexing it up with swimsuit, lingerie and even nearly-nude pics, came to vintage through John.

But the Darnells’ flamboyant style has rubbed some archeologists and historians the wrong way. One article penned by three academics for the website Hyperallergic described their Instagram as  “narcissistic and ridiculously colonial” and accused the Darnells of peddling a “white-supremacist type of vintage Egyptology.”

“It’s very problematic,” said Monica Hanna, an Egyptian Egyptologist who teaches in the country. She finds the Darnells’ practice of cavorting through ancient temples in clothes from an era when Egypt was struggling to extricate itself from the violence of British colonial rule — and when Western nations scrambled to extricate as much of Egypt’s treasures and riches as possible — particularly disrespectful.

“It’s not only trying to reenact a historic period, it’s also [saying] that such colonialist times can come back and can be re-lived,” Hanna said. “It is a cheap photo opp that also has ethical implications. I think no one can pretend that it’s not. They should not be allowed in that space.”

“I think if you’re going to practice Egyptology in the year of our Lord 2022, you can’t pretend that it’s 1922,” said archeologist Sarah Parcak. “It’s harmful to our Egyptian colleagues. It’s harmful to the public. And also, we’ve moved on — 1922 was 100 years ago! Science and archaeology is about looking forward while you’re looking backwards. We’re using lasers and X-rays and cutting-edge technologies; I’m using satellite imagery.  Why are we looking backwards as to the way the field was 100 years ago?”

The Darnells have defended their vintage garb; after all, pith helmets, spats and khakis are practical for digging around in the desert and avoiding creepy-crawlies. They said they collaborate closely with Egyptian colleagues and took care to highlight them in the epilogue for their new book. They applaud recent efforts to acknowledge the long-ignored Egyptians who have contributed — and still contribute — so much to the field of Egyptology.

As for their glamorous photo ops both among ruins and in the city of Cairo, the couple said that they collaborate with Egyptians photographers, videographers and artists on those, too.

But this has hardly been their only scandal in the academic world. The two are cagey about when and how they met, but it happened while Colleen was a student of John’s at Yale.

He was also married at the time to another bob-haired Egyptologist, who worked at the Yale Egyptological Institute. According to the Yale Daily News, that first wife filed for divorce in November 2012, alleging in documents that John and Colleen were in an intimate relationship since at least 2000, when Colleen was still an undergraduate.

Colleen was also appointed as an assistant professor of Egyptology within John’s department in 2006.

In January 2013, John was placed on a one-year suspension and resigned as chair of his department due to the alleged affair. The couple won’t comment on it, but the scandal sent the Egyptology department in a tailspin, leaving graduate students with no one to advise them and putting the fate of the program in jeopardy. Eventually, John was invited back to teach, but Colleen left Yale in 2015.

“It’s such a shame, because she’s a brilliant scholar,” said Parcak, who went to Yale with Colleen, and believes she should have tenure at a major university. “But — and I never want to say anything negative about someone’s social media choices, but when you have a large social media following and you are in a particular field, you should think about what you’re curating and how you’re showing yourself. … And if [colonialist chic] is going to be your image, then maybe working in Egypt isn’t for you, because the two do not go together.”

The Darnells launched @vintage_egyptologist in January 2017. Though it’s under Colleen’s name, it’s very much a joint project. (She does have another, solo account, @howtoreadhieroglyphs, dedicated to deciphering Ancient Egyptian text.) The couple scout locations, select outfits from Colleen’s wardrobe and write the captions together, which, they said, can take a long time.

For example, a recent reel featured Colleen in long gloves and a custom fringed gown strutting outside the New York Public Library; it was scored to the soundtrack from the 1951 swords-and-sandals epic “Quo Vadis.” The caption included a digression on Ancient Egyptian instruments, early Christian hymns and the first examples of musical notation.

“We actually looked up several academic journals [to write the caption], because we wanted to go into detail,” she said. “It was a mini research project.”

It helps that Colleen’s slender frame and gamine looks make her particularly well-suited to ‘20s and ‘30s styles, John’s favorite era. She will wear 1960s and ‘70s garments to teach and other recent vintage when she’s out in the field in Egypt, but rarely buys something new unless it’s a reproduction or repurposing of an antique piece. The couple’s passion for the past extends to their Greek revival home — stuffed with antiques — and their social life, which includes Jazz Age lawn parties, Victorian séances and driving around Durham in their Model T.

Clearly Instagram has benefited them. In the age of visuals and social media, the Darnells have found a way to indulge in and capitalize on their obsessions and share them with the rest of the world. And to get a bunch of people who probably had never thought about King Tut’s parents before to buy and read a book on them. Haters be damned!

“We are lucky to be a married couple that enjoy working together,” Colleen said. After their tour through the Egyptian galleries, they went upstairs, where they ate lunch at the Met’s sumptuous member’s dining room, with its stunning views of the Egyptian obelisk in Central Park. Modern life, it seemed, was pretty good.