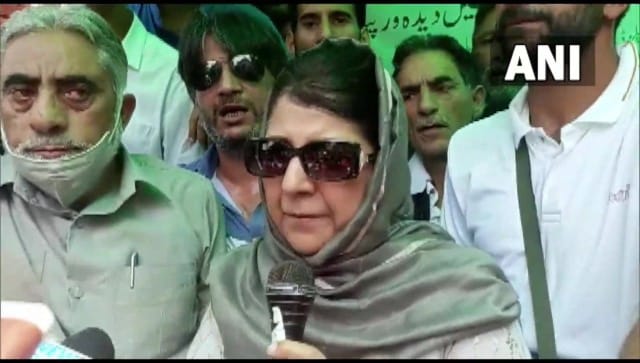 In the time to come, the BJP will even finish the Constitution and the foundations of secularism on which this country stands. They will make it a religious country…’, said the PDP chief.

New Delhi: Hours after Congress leader Rahul Gandhi blamed the BJP-led government for the death of democracy in the country, PDP chief Mehbooba Mufti joined the cart and said the BJP will finalize the constitution and give India a religious land will make.

“In the coming time, the BJP will even finish the Constitution and the foundations of secularism this country stands on. They will make this a religious country. They will change the Tiranga, which hoists you proudly, and bring a saffron flag,” she said. .

In the time to come, the BJP will even finish the constitution and the foundations of secularism on which this country stands. They will make this a religious country. They change the Tiranga, which hoists you proudly, and bring in a saffron flag: PDP chief Mehbooba Mufti (1/2) pic.twitter.com/IFRRlzaykl

She said the PDP will fight for the constitution and force the government to resolve the issue of Kashmir, for which thousands of people have sacrificed their lives.

ALSO READ  Mehbooba Mufti says Ram Nath Kovind 'fulfilled the BJP's agenda at the expense of the Constitution', says BJP not worth commenting

“They will change the flag of this nation just as they snatched the constitution and the flag of Jammu and Kashmir. But we have sworn we will get our flag and constitution back. We will also force them to address the issue of Kashmir for which thousands of people have sacrificed themselves,” she added.

Earlier in the day, Congress MP Rahul Gandhi claimed that India is witnessing the “death of democracy” and that anyone who raises people’s problems and opposes the beginning of the dictatorship is “being brutally attacked” and in the is put in prison.

Speaking at a press conference at AICC headquarters here ahead of the congress nationwide protest against price hikes and GST hikes for essential items, the former congressional president said the Gandhi family is under attack for fighting for democracy and communal harmony.

Gandhi claimed that the government’s sole agenda is that issues of people such as price increases, unemployment and violence in society should not be raised.
“There is no democracy in India and there is a dictatorship of four people, he claimed.

“What we are witnessing is the death of democracy. That is what India is witnessing. What India built brick by brick, starting almost a century ago, is in fact being destroyed before your very eyes,” Gandhi, who was flanked by party leaders Ashok Gehlot and Jairam Ramesh, said.

“Democracy is now a memory in India and nothing more. This will have consequences because the people of India will not be silent about it,” he also said.

“You all know it, all of India knows it. Anyone who is against this idea of ​​the beginning of a dictatorship no matter who he is, where he comes from, what state, what religion, man or woman, that person is cruel assaulted, jailed, arrested, beaten up,” he said.

ALSO READ  Battle of 2024: Will it be Narendra Modi vs Nitish Kumar?

“My problem is that I speak the truth and am not afraid of anything. I will raise issues of price increase and I will be attacked more. But the one who threatens himself fears,” he claimed, claiming that they are afraid of price increase , unemployment and people’s power.

Black-clad MPs of Congress led by Sonia Gandhi and Rahul Gandhi protested in the Parliament House complex as they marched to Rashtrapati Bhawan as part of their nationwide protest.