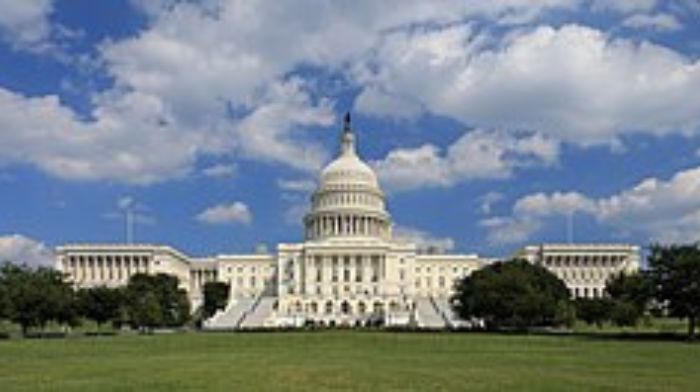 The House Sergeant of Arms announced that members of Congress would receive up to $10,000 to improve their home security for fear of normalized political violence.

In addition to the funding, each legislator can receive $150 monthly for maintenance and monitoring services.

Some of the equipment that could be covered by the funding includes cameras, outdoor lighting, motion sensors and improved locks. Some lawmakers welcome this decision; others say the support is not enough.

With crime rates skyrocketing across the country, families crippling inflation, and various social and political issues that threaten to evolve from peaceful protests to violent riots, the recent decision begs the question: Why the increase in violence?

House members can receive up to $10,000 for home security as threats escalate against lawmakers;

Threats Against All Americans “ESCALATS”

“BIDENS AMERICA” No idea. No plan. No hope. No police.

Public service may require hazard pay at this rate

Attacks and threats against government officials and lawmakers have skyrocketed in the past year. Recently, a man attacked New York congressman and Republican governor candidate Lee Zeldin with a sharp object on a key ring.

Two weeks before Mr. Zeldin, a man was arrested outside the home of Congressional Progressive Caucus president Pramila Jayapal. The man reportedly yelled threats at Ms. Jayapal, including threatening to kill her.

Perhaps the most alarming overture to violence this summer was when a California man traveled to Maryland with the intent to kill Supreme Court Justice Brett Kavanaugh over an abortion.

Capitol Police reported in 2021 that 9,625 threats had been made against members of Congress, compared to 3,939 in 2017. It’s not just major officials who receive threats, though.

According to a Brennan Center poll, one in six election officials have received threats. So what could be behind this dramatic increase in violent rapprochement with officials?

RELATED: Democrat Who Cut Off GOP During Charity Baseball Game Admits Fan, Not Republicans, Made Her Angry

A culture of acceptance

It was once widely believed, at least in respectable circles, that violence was never the answer and that peaceful protest and social debate were the best way to resolve our differences. But unfortunately the sad reality is that it seems to be changing.

Researchers at the University of California, Davis found that one in five American adults say political violence is justified, at least in some circumstances. It’s hard to imagine ever being a circumstance that justifies violence against others.

Some argue that the fault in this evolution of violent acceptance lies at the feet of the Republican Party. For example, Rachel Kleinfeld, a senior fellow at the Carnegie Endowment for International Peace, said:

“We see similar justifications for violence left and right. But we see incidents of violence that are much higher on the right, and that has to do with all the normalization of violence by leaders on the right.

Now, that doesn’t seem right if my memory serves me well. So let’s take a closer look at some of the Democratic Party’s reactions.

But they won’t protect their own citizens with the citizen’s money?https://t.co/F51GOxM5IA https://t.co/V3GxNqK2fV

The murder of George Floyd sparked outrage across the country that sadly escalated into violent riots in major cities. Then-candidate and now Vice President Kamala Harris commented on the Black Lives Matter riots:

“Nothing we’ve accomplished that has been about progress, especially on civil rights, has come without a fight, so I’m always going to interpret these protests as an essential part of our country’s evolution…”

Representative Maxine Waters told protesters that in the event that former police officer Derek Chauvin was acquitted for the murder of George Floyd, he would become “more confrontational.” Mrs. Harris and Mrs. Waters did not spend much time denouncing the mass violence and destruction going on across the country. It sure sounds like they at least apologized.

ALSO READ  What you need to know about abortion laws in Puerto Rico, Guam and other US territories?

And we must not forget the leader of the free world. Then press secretary Jen Psaki said of the illegal protests outside Supreme Court homes:

“I know there is currently outrage at protests that have been peaceful thus far, and we will certainly continue to encourage that, outside the homes of judges, and that is the position of the President.”

So from the leader of the Democratic Party, the President of the United States, there was the encouragement of illegal activities related to protests. So I don’t know if it’s right to blame the Republican Party for this increased acceptance of political violence.

Safety for me, but not for you

What I find almost laughable is the call for greater protections for lawmakers as ordinary Americans across the country face an alarming increase in violent crimes. Democratic Representative from Ohio Tim Ryan said of the Sergeant at Arms decision:

“We must do everything we can to ensure that people are safe. Lots of feral cats out there.”

You’re not kidding, Mr. Ryan. The Council on Criminal Justice recently released its semi-annual report with some alarming statistics on crime rates in the United States. Within the information, homicides are now 39% higher than in 2019, and those below have increased by their corresponding percentages since 2021:

ALSO READ  'They want to harm me': Trump campaigns victim at Arizona rally as Jan 6 probes heat up

And if you think murder is only a problem in cities like New York and Los Angeles, think again. The following cities saw the increases listed below:

Nearly 50 people shot #Chicago Over the Weekend Amid Towering Crime: By Trevor Schakohl at CDN –

Nearly 50 people were shot #Chicago over the weekend, according to the Chicago Sun-Times, as the city faces rising crime and increased… https://t.co/j8ImSIeIZh pic.twitter.com/XjQPi6LDTu

Time to look in the mirror

I am in no way advocating violence. When we disagree on political and social issues, we need to think critically and engage in open, passionate and peaceful social debate.

Nor am I advocating violence against officials and politicians. We must not normalize the use of violence as political pressure.

However, it is time for lawmakers to take a good look in the mirror and ask themselves what their fault is in relation to this increase in violent activity. You only need to look at the response times of Chicago and Seattle 911 to see how the ‘defund the police’ movement, touted by many lawmakers clamoring for more protection, has created massive security problems.

It is time for everyone to speak out against violence and support the concept of law and order. Because what are we without both?

When a company closes its doors, the whole community feels the effect.

We must return to a society of law and order. pic.twitter.com/2EFbXx36BZ