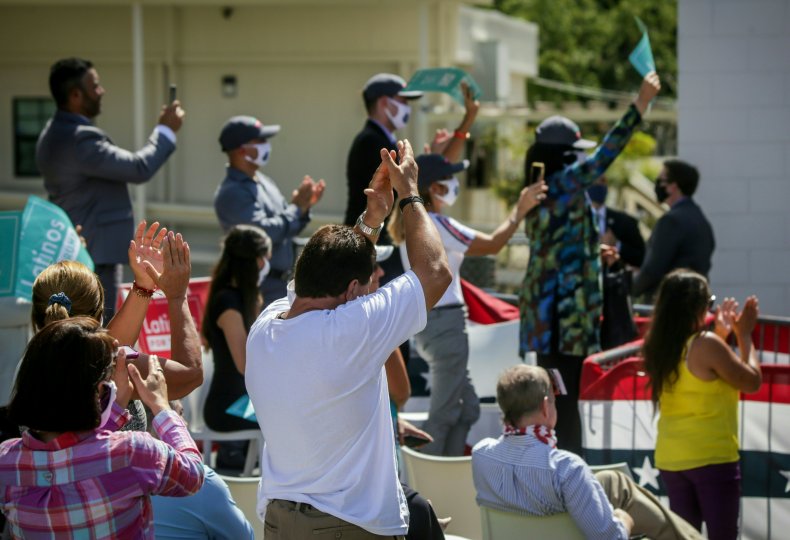 When it comes to covering “Spanish issues”, the mainstream media has a routine that goes something like this: An event is taking place, often related to immigration. Journalists then turn to the Hispanics they know: fellow liberals in the media or political elites. They then present those far-left views to the American people as the sentiment of “the Latino community.” Wash down. To repeat.

You’d think the Acela Corridor media establishment would have revised their fact-finding tactics after the Republican Party’s victories over Hispanics. Instead, national experts seem to be unwilling to resort to the same failed approach.

You can currently see it playing out in real time in the coverage of the 50 Venezuelan migrants that Florida Governor Ron DeSantis transported to Martha’s Vineyard last week. The media is once again in “Consult the Latinx” mode, bragging about the inhumanity of DeSantis “smuggling” the migrants propose the move will cost DeSantis his reelection, and talk about the popular Florida governor who “decimatedAnd they’re all doing this while a Morning Consult poll released this week showed that a large number of Hispanics were doing what DeSantis did as “appropriate,” even if some have moral qualms about it.

As the head of one of the most prominent center-right Latin American nonprofit organizations, I do not claim to speak for all Latinos. But the numbers don’t lie. Hispanic Americans have nuanced views on immigration that don’t fit neatly into partisan liberal narratives.

There is little evidence that the Martha’s Vineyard stunt has hurt DeSantis or the GOP politically. Consider a survey conducted in full after the Martha’s Vineyard affair by Democratic polling firm Civiqs, which found DeSantis to have a 7-point lead statewide in his re-election, winning both former President Trump’s 2020 performance with Hispanics and DeSantis’ in 2018.

Meanwhile, here in Texas, a Dallas Morning News poll shows Governor Greg Abbott, who has also taken migrants to refuges, within three points of Democrat Beto O’Rourke among Latinos. And in Nevada, Republican Senate Adam Laxalt, who has been labeled “anti-immigrant” by liberal groups, hoped has an 8 point lead over Catherine Cortez Masto among mostly Mexican-American Hispanics.

What can we make of this disconnect, and why does the media continue to misread Spanish voters?

Much of it can be attributed to a growing class division that plagues our politics. To whom do the predominantly liberal and highly educated political reporters of the journalism industry turn for insights on Hispanics? Their elite colleagues, such as Univision‘s unabashedly liberal leaning Jorge Ramos and The viewIt’s supposedly Republican Ana Navarro.

Ramos and Navarro may both have humble backgrounds, but they left us barrios decades ago and now live in Miami’s wealthiest suburb. congratulations to them for their success in America, but they are hardly representative of the overwhelming majority of Hispanic Americans, who happen to be working class.

It’s very easy to be indifferent to broken boundaries from the comfort of Coral Gables estates; it’s much harder to give a virtue signal from Eagle Pass.

As a first-generation American and lifelong Texan, the border crisis in our country is very personal to me. Mine Abuelos still live in Mexico and regularly have migrants pass their homes on their way to the United States. Every day we hear horror stories – stories that rarely find their way into mainstream national discussions – about unspeakable crimes committed against both and by undocumented migrants drawn to our country by weak border policies fueled by misguided progressive altruism.

Talk to workers in heavily Hispanic working-class communities as diverse as my hometown of Midland, Texas or Hialeah, FL, and you’ll find politically diverse groups of Latinos who share some common views rooted in a sophisticated understanding of immigration policy: We all have sympathy for migrants, but there are also serious concerns about overcrowding, limited resources and public safety. And yes, we are also deeply frustrated at the failure of both sides to secure the border and fix our dysfunctional immigration system.

Our nuances may not make for big headlines, but journalists mimicking the trusty liberal talking points of their elite “Latinx” amigos do Hispanics a disservice. If you want to know what Latin Americans think about DeSantis, immigration and the state of our country, why not just ask?

Abraham Enriquez is the founder and president of Bienvenido US, an organization dedicated to mobilizing, enhancing, and empowering Hispanics to promote the principles of individual freedom and sound governance.

The views expressed in this article are those of the author.