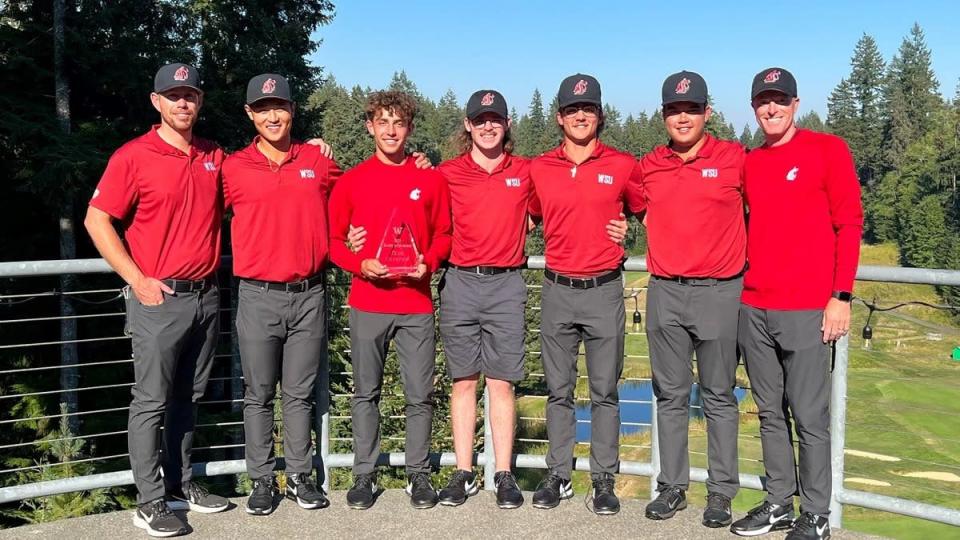 The Washington state men’s golf team accomplished something it had never done before on Tuesday: The Cougars won a tournament in the western half of the state.

Washington state captured the tournament from its rival hosts, the Husky Invitational held in Bremerton, marking the first time the Cougars have won a tournament in the western part of the state. WSU finished 4-over 868, three strokes clear of USC and five ahead of the host Huskies.

“We got off to a shaky start, but give credit to our boys. They just hung there and clawed their way back and just seemed really patient and just played until there were no holes left,” said Washington State coach Dustin White. “There’s no better way to start your season.”

The win was White’s fourth during his tenure with the Cougars.

Junior Jaden Cantafio and senior Pono Yanagi both finished in the top five of the individual standings. Cantafio led the Cougars after shooting 4-under 68 on the final lap to finish at 3-under 213, finishing third solo. He rose 15 places in his final round, including five birdies and an eagle on the par-4 18th. Cantafio finished his day one stroke behind Washington’s Taehoon Song and five strokes behind USC’s Jackson Rivera, who won the tournament. Yanagi finished 2-under 214 for the tournament, tied for fifth.

ALSO READ  Tiger Woods Applauds Serena Williams at US Open; 'one of the main reasons' she plays

“The teams we were paired with and competed with, these are high level teams and you know, a lot of respect goes to those guys,” White said. “I mean, it’s hard to win in college golf, and every time you get a chance to compete, there’s no other feeling like it. So we’re just really grateful for the fact that we had some teams that pushed us, and I think we’ve all made each other better.”

Rivera, a sophomore, has finished in the top 10 in four of his last five starts. It is the first win in his student career.

In terms of craziness, there was plenty of it at the Ram Masters Classic at Fort Collins Country Club in Colorado. There were three holes-in-one, an albatross and a tournament record tie in the two-day 54-hole event.

Host Colorado State finished 17th under for the tournament, tying the event record.

Elsewhere, Stanford took a signature early-season win against a packed field at the Fighting Illini Invitational at Olympia Fields, beating runner-up Florida and Illinois by 13 shots.

The Cardinal, second in the Golfweek Sagarin ranking, even shot in the last round. Stanford led after each lap and junior Michael Thorbjornsen took his first collegiate win. He finished at 7-under 203, beating Florida’s Ricky Castillo and Illinois’ Adrien Dumont de Chassart by one shot. Thorbjornsen became the first cardinal to win the tournament since Maverick McNealy in 2015.

In addition, the Division I Council now allows athletes who plan to enroll in another program after graduation to access the transfer portal at any time.