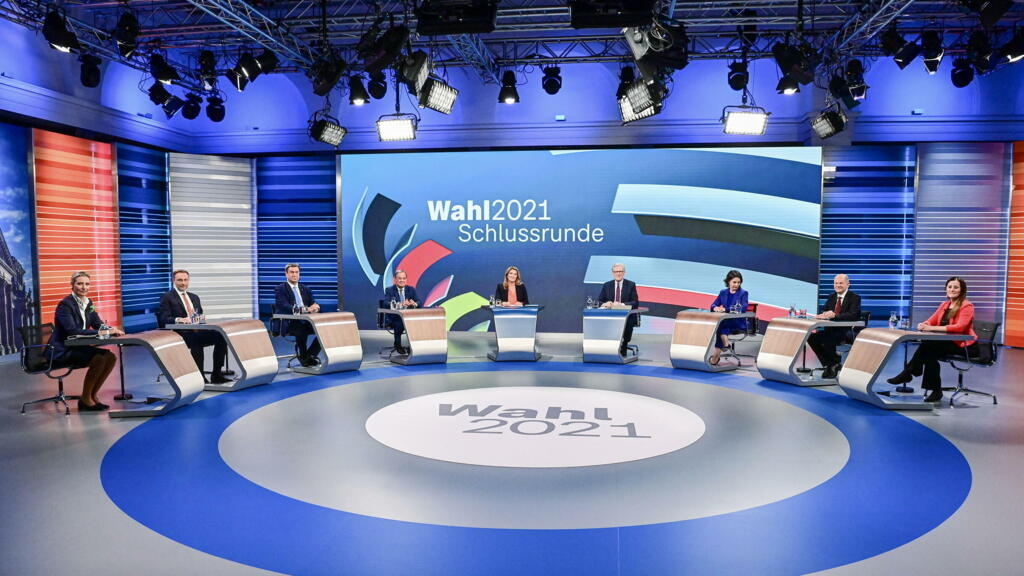 The two neck-and-neck candidates to replace Angela Merkel as German Chancellor called for a stronger European Union on Thursday, in a final televised debate that did little to upset a race that is set to end through long coalition negotiations.

A few days before Sunday’s parliamentary elections which will see Merkel step down after 16 years in power, her conservative CDU-CSU alliance is catching up with the center-left Social Democrats (SPD) in the polls, closing the gap to just two percent .

The vote is being watched closely by Western allies, worried about an uncertain outcome that could dull the participation of Europe’s biggest power on the international stage for weeks, if not months.

Foreign policy figured little during the tight campaign, but in their last joint television appearance, the two main contenders for Merkel’s post – Finance Minister and Vice-Chancellor Olaf Scholz of the SPD and Armin Laschet of the Conservative bloc of Merkel have each called for a strong, sovereign Europe.

“We need more Europe, we have to speak with one voice,” said Laschet, who is also the prime minister of the state of North Rhine-Westphalia.

“So we can act even when the US pulls out,” he said, winking at the chaotic US exit from Afghanistan.

Scholz said the EU must stay united to remain relevant on the world stage, and stressed the importance of cooperation with the US and NATO.

Annalena Baerbock, Greens candidate for chancellery, called for a common EU policy on China “so as not to pit us against each other”, advocating a combination of “dialogue” and “harshness” with Beijing .

“I’m desperately looking for a winner!” wrote the bestseller Bild.

The latest opinion polls put Scholz’s SPD in the lead at 25%, followed by CDU-CSU at 23%, within the margin of error.

The Greens are in third place with around 16% support, giving them a realistic chance of becoming a junior coalition partner in the next government.

If the polls prove to be correct, Merkel’s conservatives are heading for their worst score in post-war German history, potentially tarnishing Merkel’s own legacy.

Their choice for chancellor, the affable but gaff-prone Laschet, 60, saw his popularity wane after he was caught laughing during a tribute to victims of the deadly July floods.

Often described as capable but boring, his center-left rival Scholz came from behind to take the lead, posing as a sure pair of hands and Merkel’s true heir.

Climate change has become a major concern among the 60.4 million people eligible to vote, of which around 2.8 million are able to do so for the first time.

Baerbock, 40, warned that the next government “will be the last to be able to actively influence the climate crisis.”

Huge crowds are expected to take to the streets on Friday as part of a global climate protest, with Fridays for Future founder Greta Thunberg parading in Berlin.

After guiding Germany safely through crises such as the 2009-2010 financial crisis in the eurozone, a massive influx of refugees in 2015 and the coronavirus pandemic, Merkel leaves behind a healthy economic powerhouse .

But critics say years of underinvestment in infrastructure and education have left the EU’s most populous country of 83 million people unprepared for a greener, more digital future, while inequality social have worsened.

Laschet argued that tax hikes could stifle the rebound of the pandemic and pledged to cut red tape for businesses.

The unpredictable election is expected to give rise to a number of coalition options.

Laschet has already said that even if he comes in second, he will try to concoct an alliance with the Greens and the pro-business FDP.

The Greens have indicated that they are more comfortable governing with the SPD.

If they needed a third partner for a parliamentary majority, far left Linke could step in, but their anti-NATO stance makes him a controversial choice.

A three-way marriage between the SPD, the Greens and the FDP is also possible.

Neither party will partner with the far-right Alternative for Germany (AfD).

Coalition talks are expected to drag on for weeks, if not months, keeping Merkel in power a little longer.

Poland plans to strengthen its army in the face of threats from Belarus and Russia | TBEN | 26.10.2021