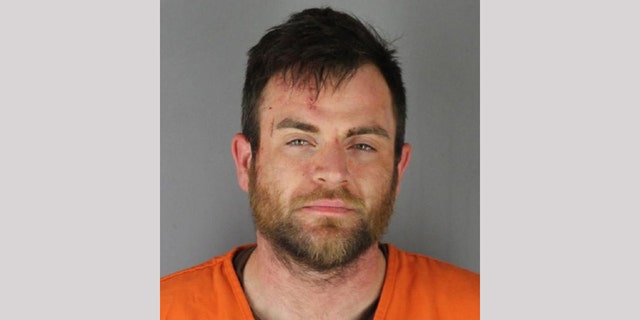 A St. Paul, Minnesota man who drove a car into a group of protesters in Minneapolis in June 2021, killing one person, was sentenced to 20 years in prison on Wednesday.

In October, Nicholas Kraus pleaded guilty to second-degree assault and second-degree murder for killing Deona Marie Knajdek during the incident.

Nicholas Kraus was sentenced to 20 years for driving into a crowd of protesters in Minneapolis, Minnesota, in 2021 and killing one person while injuring three others.
(Hennepin County Jail)

Kraus faced a third charge of second-degree assault, which prosecutors dropped as part of the plea deal.

Kraus was charged for an incident in which he sped toward a parked car that was being used as a barricade on the street where protesters were protesting the murder of Winston Boogie Smith, Jr.

He then hit the parked car, pushing it into the protesters, killing Knajdek and wounding three others.

Minneapolis police descend on the block-long stretch of Lake St. in Uptown just before sunset to dismantle the barricades erected by protesters on Tuesday evening, June 15, 2021 in Minneapolis
(Jeff Wheeler/Star Tribune via TBEN)

TBEN station KMSP in Minneapolis reported that Kraus admitted in court in October that he deliberately drove into the barricades and into the crowd.

DRIVER WHO PROWED DEMONSTRATORS IN MINNEAPOLIS THOUGHT HE WAS JESUS ​​TO SUPER BOWL: REPORT

Under questioning, he also admitted that he suffered from a mental health problem and was under the influence of narcotics at the time of the crash. What he couldn’t say, however, was what drove him to do it and why.

Before sentencing on Wednesday, Kraus told the court I should have died that day while declaring his support for the Black Lives Matter movement.

Police clear items used to barricade Lake Street in the Uptown neighborhood of Minneapolis, Wednesday, June 16, 2021. A St. Paul man is charged with speeding and plowing into a group of protesters in Minneapolis while intoxicated, in which he killed one person was charged with intentional manslaughter on Wednesday.
(Carlos Gonzalez/Star Tribune via TBEN)

Kraus told the courts that he made a bad choice that day and that he deserved the maximum sentence of 21 years in prison.

Although he said he didn’t expect the family to forgive him, Kraus apologized to the family.

A victim of the incident told the court he disagreed with the plea deal and wanted Kraus to receive the maximum sentence.