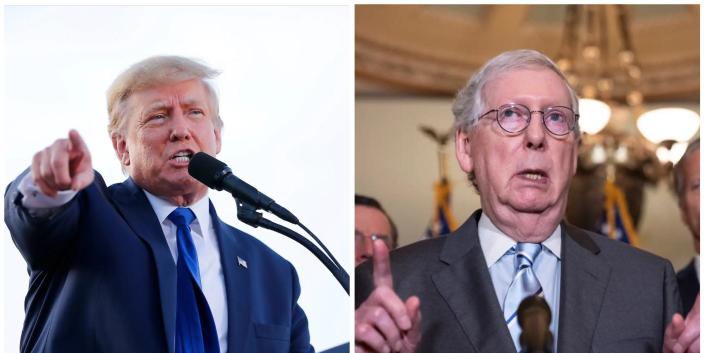 Senate Leader Mitch McConnell is remarkably silent about the investigation into former President Donald Trump for holding White House documents at his home in Mar-a-Lago.

“I don’t really comment on this whole investigation that has been dominating the news for the past month. I think we’re following it like all of you,” the Kentucky Republican responded to a reporter who asked for his opinion.

During a news conference about a flood in Kentucky last month, McConnell also dodged a similar question.

“I’m here today to talk about the flood and the recovery from the flood,” McConnell said: to reporters at the conference the day after the raid.

McConnell released a statement later that day: “The country deserves a thorough and immediate explanation of what led up to Monday’s events. Attorney General Garland and the Department of Justice should have given answers to the American people and must do so immediately.”

McConnell’s somewhat muted response to the investigation has become a point of contention with others conservatives and observers – especially if other Republicans as House Minority Leader Kevin McCarthy expressed their concerns.

McConnell, who has not spoken to Trump since December 2020, thought the January 6 uprising would have left the then president “thoroughly discredited”.

He often took the “no comment” stance on Trump-related matters, while former President McConnell has repeatedly slammed him by calling him a “loser” and an “old crow.” Trump also insulted McConnell’s wife, Elaine Chao.

And when the inflation-cutting bill was passed, the former president said on Truth Social that McConnell was “played like a violin with the vote today by Senate Democrats.”

A McConnell spokesperson did not immediately respond to Insider’s request for comment.