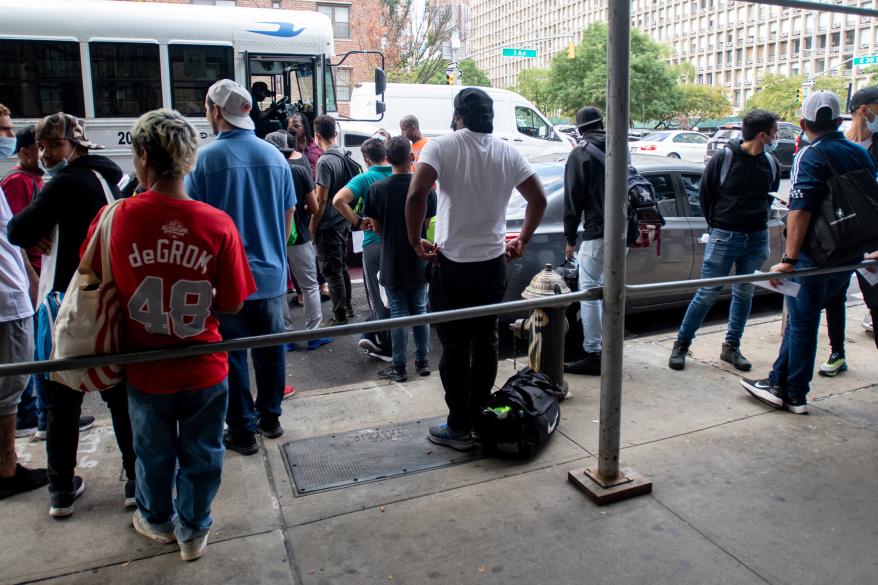 The city’s Bellevue Men’s Shelter at 30th Street and First Avenue in Kips Bay has become a tinderbox of newly arrived migrants, runaway bums and sex offenders—an explosive amalgam wreaking havoc on the streets of the once-quiet residential area.

“Over the past six months it’s gotten really, really scary,” said a terrified resident of the block who said police had recently contacted him about an armed robbery and carjacking outside his home. “The situation seems to be reaching a tipping point.”

At the 1,000-bed shelter — the largest for single men in the city — residents told The Post about overcrowding, fighting and tensions with the newly arrived asylum seekers. Texas Governor Greg Abbott began flooding the Big Apple with busloads of migrants in early August. On Saturday, three more buses arrived.

“We don’t want them here because to be honest I think they’re being treated better than we are, and this should be ours,” said Darrell Pankey, a homeless resident for six months.

“It could explode any moment now,” he added.

Conditions in the shelter have become increasingly chaotic.

Of this year’s calls, 908 were ambulance cases. Emergency services registered 26 calls for disputes (versus seven); five for running attacks (versus two); and 12 for other crimes (of one).

The FDNY responded to the building Friday morning to a report of people trapped in an elevator that turned out to be a “malicious false alarm,” the department said.

The building, a former mental hospital dating back to 1929, is sandwiched between the Bellevue and NYU Langone hospital campuses and also serves as an admissions center for the city’s shelter system.

Another homeless resident, Jeffery Harris, claims the migrants stole phones to reach their families at home.

“This place is packed. There are no beds and they still send them. They can’t fix this place fast enough to accommodate them,” Harris said.

Meanwhile, the migrants claim it is the homegrown bums who are the real threat.

“There are dangerous people here,” said Elias, a new arrival from Venezuela who said unattended possessions are routinely stolen. He has so far seen residents use drugs and one fight, he said.

Another man from Venezuela said the New Yorkers were “aggressive; always yelling and pushing people and creating problems.”

Gabriel García, 18, also from Venezuela, said he was woken up a week ago by his roommate who was yelling at him in English and he couldn’t understand what he was saying.

“I was scared and I felt like my life was being threatened,” Garcia said.

Venezuelan Ernesto Jose Cortez, 25, said he saw a resident standing close to a group of newly arrived migrants outside the shelter on Thursday night “in a way as if he wanted to fight… he wanted to beat them.” He said he warned a guard who intervened.

Migrant crisis moves north: This is happening across the country as border states transport migrants around the US

“There is a sense of racism against immigrants, and there is danger here,” said Ángel Pereira, 25, a Venezuelan who comes here from Texas and spends a week in the shelter.

The massive building has east and west wings with rooms that can accommodate two to 10 people, one resident said. Several people said the air conditioning barely worked.

There are also tensions between workers and residents.

Kenneth Martin, a New Yorker who has been at the shelter for a month, called the staff indifferent. He got into an argument on Sept. 6 with a guard who operates an elevator about who should push the buttons. The guard yelled, “This is why you’re homeless.”

Martin, who made a video of the incident, called the guard the N-word and said the employee tried to reach for his phone. He said guards took him to hospital after the incident, but he refused treatment.

One resident, who said he was recently released from prison and would not give his name, said workers seem to prioritize helping migrants.

Former inmates on parole from state prison are sometimes housed at the shelter under a city-state arrangement, according to the State Department of Corrections and Community Supervision, which said it does not transport them directly there.

Still, 26 sex offenders, including a dozen identified as the most dangerous — Level 3 — list the shelter as their home, according to the state registry.

A resident of a shelter was arrested in 2015 for raping a woman at a nearby bar. The city then claimed to have cleaned up the sex devils, claiming at the time that the state registry was not always correct.

Another resident of the shelter, Elijah Kelly, was arrested during the December 2020 New Year’s Eve strangulation rape of a local resident.

An employee of an apartment building opposite the shelter said residents often use the plant beds there to store their knives, needles and other contraband.

“Here they hide their weapons, screwdrivers, knife,” said Costas Stamatiou, who then took a folding pocket knife from the hedges. “They’re always hiding something.”

On Monday, the shelter and others were so full that the city could not find beds for 60 men, most of them migrants, in violation of the court-ordered right to shelter.

Mayor Eric Adams has said the city’s reception system is at “breaking point” as 11,000 migrants have come to the Big Apple.

Ronald Francois, 55, has lived in a shelter since June and said he was finally leaving for a Veteran Affairs facility and that the influx of migrants seemed like the last straw.

“This system is failing,” he said. “The homeless system is a failure system, so I’m trying to get out of it as soon as possible.”

City officials said they provide beds to those in need under the shelter law, including sex offenders, noting that not all violators have residence restrictions.

Officials said the city and shelter operators provide 24-hour security, including cameras in its buildings.

“We are working around the clock to ensure that we welcome recently arrived asylum seekers in need of shelter,” said a spokeswoman for the Ministry of Social Services.

“We have already opened several emergency sites across the city to meet the unprecedented need for reception services, and our teams continue to work at an extraordinary speed to identify additional capacity in the five boroughs while addressing the unique needs of asylum seekers coming to us. are fully addressed. in their greatest need,” the spokeswoman added.