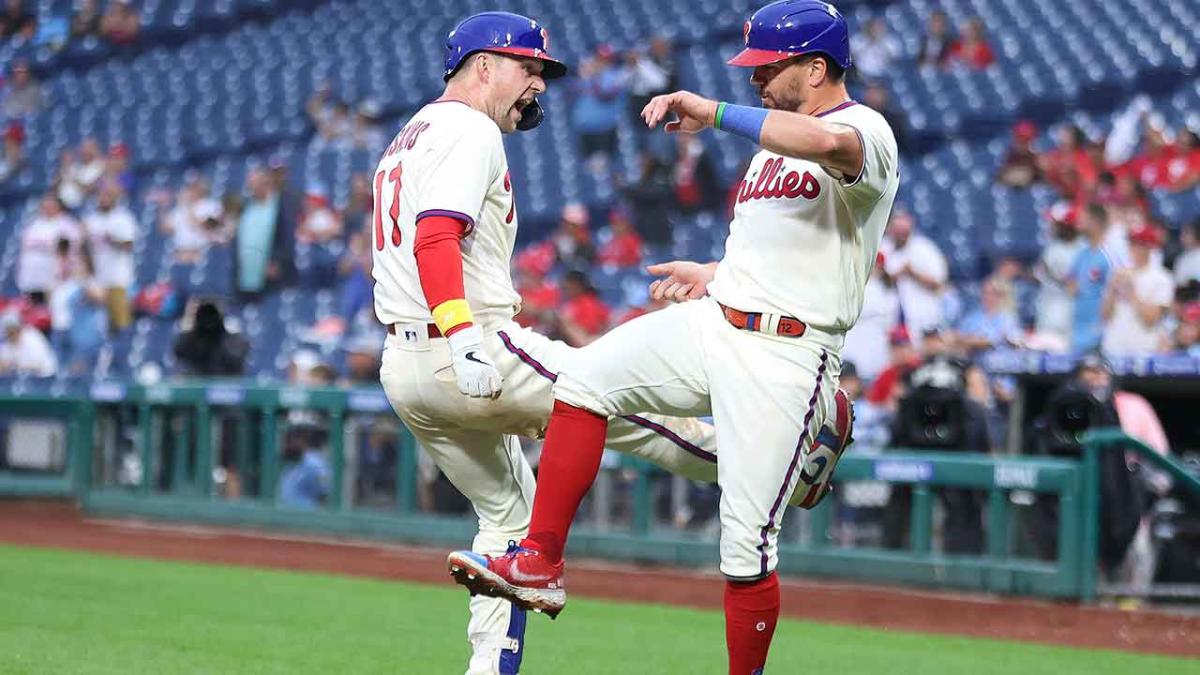 Sunday didn’t go to plan for the Phillies — far from it — but they still took a 7-5 win and came back twice against the Nationals after a woefully long rain delay to close out a sweep.

The Phils and Nationals were determined to play Sunday and keep the off-day they share on Monday, although the forecast predicted rain all afternoon. The game started on time at 1:05 PM with the start of Aaron Nola and the Phillies led by one run in two innings.

As Nola warmed up ahead of the top of the third, home plate umpire Alex Tosi waved the Phillies players off and a rain delay started.

“It was all up in the air,” said manager Rob Thomson. “We weren’t sure if we would be delayed. We knew it was going to rain, but not if it would be heavy enough.”

When play resumed, Nola was lost due to the long delay and Cristoper Sanchez was knocked around to give up four runs over two innings.

But the Phillies quietly refused to go down against the worst pitching staff in the Nationals. Rhys Hoskins brought them back twice with a three-run homerun in the fifth and a sacrifice fly in the sixth. It paved the way for Alec Bohm’s game-winning two-run homer in the seventh.

“How do you stay locked up for 3½ hours? The short answer is you don’t,” Hoskins said. “There’s a little bit to start, ‘OK, it’s light’, and you stay locked up and loose. But after a while it looked like the rain was going to stay. We have to be Eagles football fans for today, which was best cool. We can’t do that on Sundays during the year. But after that it’s about some of the pitchers that we can deal with when they come out of their bullpen, get physically detached.”

The Phillies again swept the Nats and went 5-1 on their homestand against Miami and Washington. They have won 21 of their last 25 games against the Marlins and Nationals by beating them by taking the lead early or scoring late.

“We’ve gotten a lot of guys on base and if you keep doing that, traffic on bases, stressful pitches for the other guys, eventually the big hit will come,” Hoskins said. “Today we have some big hits.

“There’s no panic in the dugout. We’ve come back too late too many times, we’ve scored too late too often not to be confident it’s going to happen again.”

Seranthony Dominguez was activated prior to the match. After missing nearly a month with triceps tendonitis, he pitched a 1-2-3 eighth inning. David Robertson made the save.

“The speed was good,” Thomson said of Dominguez. “He was behind in the count, but came right back. He looked good, he looked normal.”

ALSO READ  Kevin Stefanski: It's up to me to communicate that an insult should not score late in the fourth quarter

The Phillies (78-62) gained ground against the Padres, who lost a second game in a row. The Phils are in second place with a wildcard, 1½ games to San Diego and 3½ to Milwaukee, the first team eliminated.

The Phils will be inactive Monday before starting a six-game road trip that will take them to Miami and Atlanta. Bailey Falter opposes Sandy Alcantara in Tuesday’s series opener. It will be the sixth time this season that the Phillies will face Alcantara, matching their most encounters with a starting pitcher since 1960.

“It’s a sprint,” Hoskins said. “We still have 22 (games) to go. What more could you want as a competitor? We would like to participate and have already won, but this is going to be as competitive as it gets.

“We know it’s there. We feel it. But we have to win as many games as possible before we get there and that starts on Tuesday.”