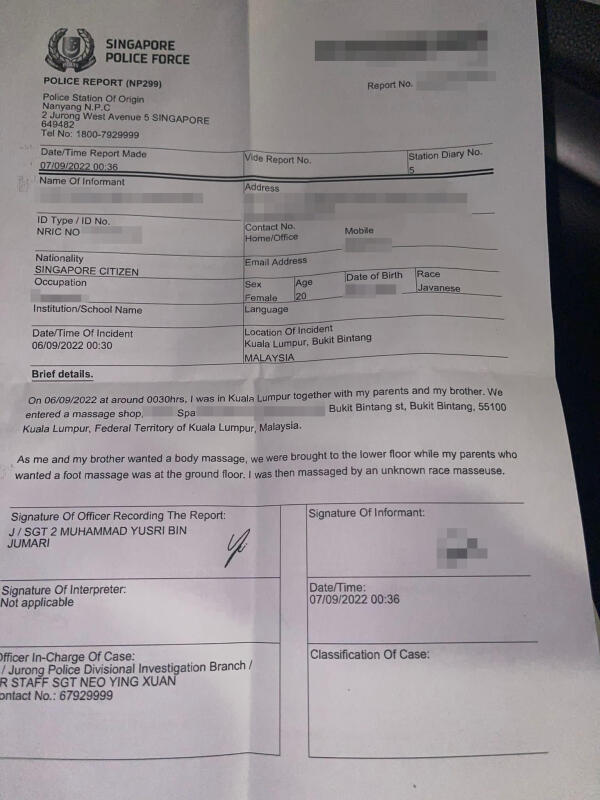 A family of four from Singapore recently went on a vacation to Kuala Lumpur, but the trip ended with a woman, 20, who was allegedly molested by a male masseur at a massage parlor.

The case has been picked up and reported by Singaporean media, culminating in police reports in Malaysia and Singapore.

Daily news from Shin Min followed up on the case and has since revealed more information after speaking with the victim’s mother.

According to Chinese media, the incident took place on Sept. 6 at approximately 12:30 PM at the D’Care Foot Reflexology Department along Jalan Bukit Bintang in Kuala Lumpur.

Reviews on Google showed that it is highly rated and recommended.

The mother, who declined to be named, said she was going on vacation to Malaysia on Saturday, September 3.

The family of four – husband, wife and two children – went for a massage on the last night of their trip on Tuesday.

The mother told Shin Mino: “My husband and I were upstairs for a foot massage and my daughter and son were downstairs for an oil massage.”

She also revealed that her daughter did not accuse the male masseur of molestation right after the massage.

The mother said her daughter was too scared to inform anyone about the alleged assault at the time and that she was silent.

It was only when the family returned to their home that the woman’s daughter suddenly collapsed and cried.

The mother told Chinese media that she claimed the male masseur touched her nipples and put his lips on them, almost penetrating her with his fingers, but she stopped him.

After the daughter revealed what had allegedly happened to her, the mother returned to the massage parlor to confront the staff.

Was reportedly told that massage was normal?

However, she said the owner of the company was not cooperating.

The mother claimed that she was told at the massage parlor that such types of massage were normal.

A massage parlor staff confirmed with Shin Mino on the phone that the police there were called in by a customer after an incident and a staff was handed over to officers who showed up.

It was also revealed that the masseur had worked at the outlet for two to three years.

As the case is now being handled by the police, the massage parlor is unable to comment further, but it was further disclosed that the male masseur has not returned to work pending investigations.