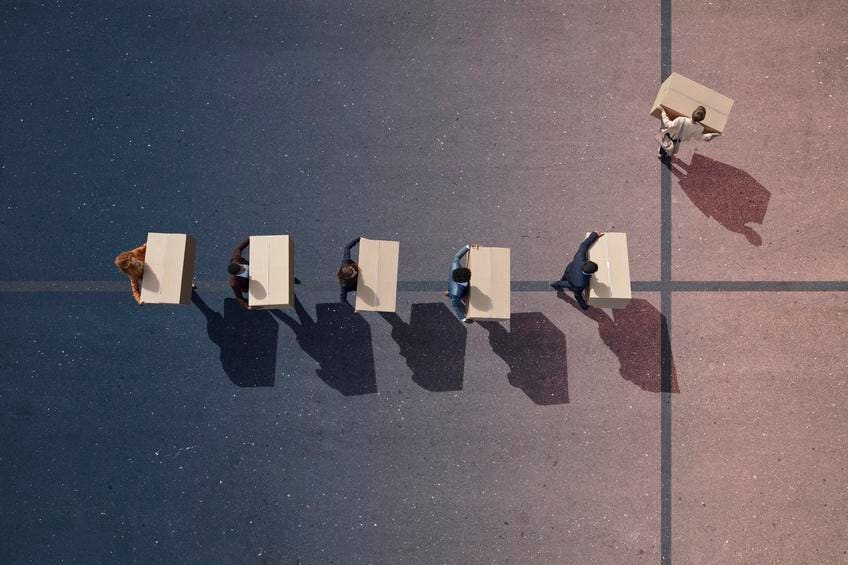 While many experts had expected an announcement that the US economy is officially in recession due to rising inflation and a general state of volatility and slowing growth, the National Bureau of Economic Research (NBER) has decided we are not officially in a recession yet. to sit .

Some economists were quick to raise flags and point to two consecutive quarters of falling real GDP – the technical definition of a recession. However, other economists called the labor numbers too promising a sign to make the official announcement. The NBER looks at the bigger picture, including the labor market, consumer and business spending and incomes.

However, are there more layoffs in the offing? Would this push us into a recession?

The looming recession has been propped up by good labor reports.

Part of the reason the NBER didn’t call for a recession is that it hasn’t all been bad news with the economy. Many are currently defending the strength of the economy. The theory is that as long as we are all making money, we should all have money to spend and keep the economy going. It’s hard to force a recession when there’s still money to be made by job seekers.

Some media outlets paint a different picture, however, with headlines about recent layoffs and the possibility of further austerity measures to come. The biggest concern is that announcements of layoffs could lead to a decline in consumer spending, leading to lower reported revenues and potentially even more layoffs.

The biggest concern for those fearing a recession is that labor reports could weaken in the second half of 2022, removing the main economic engine that has propped up the economy and kept us out of a recession. Once the workforce turns, it would be hard to say we’re not in a recession.

The crucial question that everyone is now trying to figure out is whether the labor reports will bring bad news in the next two quarters. All we can do is work with the information we have in front of us.

According to the US Bureau of Labor Statistics, the unemployment rate rose 0.2% to 3.7% in August, while the number of unemployed rose to 6.0 million. However, employers added 315,000 jobs in August, after 526,000 jobs in July. It also appears that wage bills are now above pre-pandemic levels, meaning workers have more money to spend. If inflation did not rise, it would seem that consumer spending would rise, yet we cannot ignore the role of rising inflation on consumer spending as people brace for what now seems an inevitable downturn. It is only natural for people to limit discretionary spending when they fear a recession is coming.

As we’ve seen in recent media headlines, it seems that many different companies have announced upcoming layoffs. Some large companies such as Bed Beth & Beyond and SNAP have stated that up to 20% of their staff will be laid off. Meanwhile, Apple, Tesla, Amazon and Meta are all announcing layoffs. While these numbers are significant, it is uncertain whether they will have a major impact on overall employment figures.

What’s going to make the unemployment numbers even more interesting is how quickly these laid-off workers from tech giants can get back to work.

How important are labor reports relative to a recession?

We recently wrote about how the International Monetary Fund (IMF) economists expect the US to narrowly avoid a recession. Economists will continue to look at the general economy, so when it comes time to declare an official recession, everything from labor reports to investor confidence will be considered.

Labor reports are important in the face of a recession because if people don’t make money, they can’t spend money, at least not at the same rate. If you can’t spend money, companies will continue to report lower profits, which in turn will hurt investor confidence through further stock sell-offs. This will lead to companies laying off more employees as they try to adapt their operations to consumer demand.

Federal Reserve Chairman Jerome Powell recently issued a warning that the central bank’s fight against inflation will be fraught with casualties. Some critics believe that this leads to people becoming unemployed, especially small businesses, as the cost of money will rise as interest rates rise. When the cost of money rises, companies have to cut staff, hurting the labor record, which could be the last straw that could lead to a recession.

Fears are that the rate hikes designed to slow the economy could raise unemployment from 3.7% to 4.6% or higher. The Fed needs to balance the economy by focusing on cutting inflation, which is done by raising interest rates. However, they cannot raise rates so high that they harm the labor market. This is where things get very unpredictable.

What other notable layoffs have we observed recently?

It can be challenging to understand labor reports because when we follow the media, we are often bombarded with news of major austerity measures.

These layoffs are notable because they are the result of companies adjusting for decreased revenues, meaning the economy is still in a downturn.

It’s easy to get discouraged about the economy when you see media reports of large companies laying off a significant percentage of their workforce, not to mention soaring inflation. It’s also tempting to see these cuts as an indicator that we’re headed for a recession.

A key dilemma to consider is that during the pandemic, many tech companies had to hire more staff to meet increasing demand and adapt to new ways of doing business.

Not every industry or business will be equally affected by the worries of a recession and rising inflation. Many companies in sectors such as healthcare, utilities and consumer staples tend to be more recession-proof and continue to perform well, regardless of the health of the economy.

What does this mean for investors?

Layoffs will affect your investment plans as companies cut employees due to lower earnings and fear of future earnings. As the companies make less money than expected, stock prices fall, causing the value to fall. As a result, there are many losses in the stock market. This worries investors as the volatility often leads to wild swings.

This does not mean that you should stop investing in the stock market altogether. Many companies are still able to achieve strong financial results in times of inflation, even during a recession. We recommend switching your investing style to plan for this. Check out Q.ai’s Inflation Kit and protect your investments from depreciation. You don’t have to lose money just because of the state of the economy.

In fact, you can activate Portfolio Protection at any time to further protect your gains and reduce your losses, no matter what industry you invest in.

‘West Wing’, ‘Veep’ raises a team for a fundraiser to help...