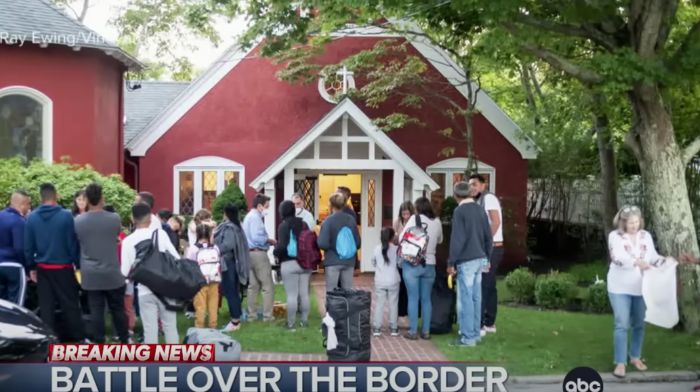 It’s quite virtuous and fashionable to call yourself a “sanctuary” city, but as we learn, it’s definitely a different story if you really have to get up and do it.

Liberals from all over are outraged by Florida government Ron DeSantis, which reportedly sent two planeloads of migrants fresh from crossing the southern border into the left-wing enclave of Martha’s Vineyard on Wednesday.

On Thursday, several busloads of immigrants arrived in Washington DC outside the residence of the vice president of the Naval Observatory.

But the tantrums coming from the left are enlightening. It reveals the veneer of “acceptance” and “welcome” as a sham. Example: “Morning Joe” on MSNBC this morning.

Wealthy white liberals fell silent as Biden dumped planeloads of illegal aliens in the southern states in the dark of the night. #JimCrowVineyard

At MSNBC, “Morning Joe” host Joe Scarborough was outraged (although he acknowledged that there is, in fact, a crisis on the US’s southern border).

Scarborough first went after Texas Governor Greg Abbott for the busloads of migrants arriving at the vice president’s residence: “It’s grotesque to grab these people, throw them on buses, drive them to Washington DC and just “It’s grotesque. What they’re doing to these people is, this is political human trafficking.”

It was then that co-host Willie Geist focused on DeSantis and said:

“Well, with that, Joe, how about telling a group of desperate people who have arrived in the United States to get on this plane. We’ll send you to New York or Boston, where you’ll be well looked after. They are better equipped there to take care of you. They will have a job and a new life for you.” And then be dropped on an island off the coast of Massachusetts, an island that was not warned that these people were coming.”

Where has Morning Joe been? Are they outraged that the Biden administration is sending planeloads of immigrants to places like Westchester County, New York in the middle of the night? Is this also “political human trafficking?”

Were they outraged when their former mayor, Bill De Blasio, packed homeless people with one-way trips to destinations elsewhere? Was that “human trafficking?”

Perhaps most tellingly, Texas Governor Abbott has been doing this for a while. Only now, when future presidential candidate Ron DeSantis joined the fun, has it gained national attention.

Abbott is not a likely contender. So the media — the Democrats’ campaign arm — didn’t have to go into a complete wall-to-wall collapse.

Martha’s Vineyard couldn’t even handle 50 illegal immigrants for 24 hours. They called the buses and took them off the island. But I thought leftists liked diversity? Sad day. pic.twitter.com/qh324FrqZE

There really is a crisis at the border

Geist agreed with Scarborough that there is chaos at the border. He even questioned Vice President Kamala Harris’ statement to NBC’s Chuck Todd that the border is secure. He claimed:

“So, yes, grotesque is the word for that. And as you say, Joe, we’re going to cross 2 million border crossings, 2 million people crossing the border. That is by far a record. So it is a crisis. Vice President Harris told Chuck Todd a few days ago that the border is clear. It is objectively not safe. So there is a problem. The question now is how to fix it?”

“Yes, there has been a crisis, as you said, and, and it is a crisis that needs to be resolved. We’re not solving it by using the migrants as political pawns and ripping them off for, you know, so you can own the libraries. You don’t own the libraries of human lives, drop them off in a place that wasn’t prepared, didn’t know they were coming! You don’t own the libraries by dropping them off in the middle of a street on Massachusetts Avenue in Washington DC so you can say, “Hey, we owned the libraries! We dropped these babies. We dropped these kids off in the middle of the street in front of the Vice President’s house! That is really grotesque.”

How often does Morning Joe use their platform to demand that the chaos at the border be stopped?

They clearly think it’s a crisis, so why not use their platform to talk about it? Pressure Biden?

To ask these questions is to answer them. And consciously or not, the double standard is plain to see for anyone with some functioning eyes and ears.

I’m in a few Martha’s Vineyard Facebook groups and they’re all turning against each other. Calling their friends for not allowing migrants into their summer cottage pic.twitter.com/igS8dalb5a