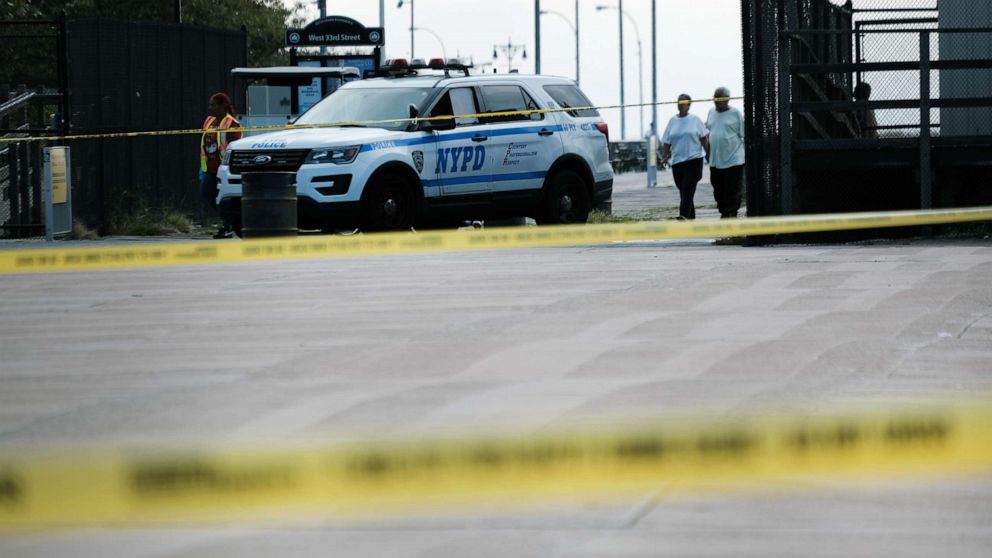 A mother police officer in New York City said she is suspected of drowning her three children, while in the throes of a postpartum breakdown she is now charged with murder.

The mother, 30-year-old Erin Merdy, was charged with three first-degree murders, according to New York police. For each victim, she is charged with murder, murder with depraved indifference to human life and murder of a victim under the age of 11, officials said.

The charges were filed while Merdy is undergoing a psychiatric evaluation at a hospital and came a day after the New York City chief investigator diagnosed her three children: a 7-year-old boy, a 4-year-old girl, and a 3-year-old daughter. one month old — died by drowning and that the manner of death was murder.

Concerned relatives and police found Merdy soaking wet, barefoot and alone on the Coney Island boardwalk early Monday after calling relatives and allegedly threatening to harm her children, police said. An official briefed on the investigation told TBEN News that the mother was “almost catatonic” when police tried to talk to her and investigate whether postpartum depression played a role in the alleged triple murder.

The children were discovered unresponsive by police at 4:42 a.m. Monday on the waterfront of Coney Island beach, about 2 miles from where the mother was, authorities said.

Police said the deaths of the children appeared to be premeditated and not something that happened on a whim.

The horrific incident began to unfold around 1:40 a.m. Monday, when a family member called 911 and said she feared the mother would harm the children.

Officers went to the mother’s apartment in Coney Island, knocked on the door, but received no answer, officials said. While a man appeared at the address and identified himself as the father of one of the children, who also expressed concern for the welfare of the children and told officers he believed the mother had taken them to the boardwalk, authorities said. . .

The mother was unable to communicate with police when they detained her for questioning on the boardwalk, officials said.

Police have received surveillance videos of Merdy walking the children quietly to the ocean in the middle of the night, police sources told New York’s TBEN station WABC.

Kenneth Corey, chief of the New York Police Department, said at a news conference Monday that the children were unresponsive on the waterfront at the W. 35th Street boardwalk. Officers immediately performed life-saving measures on the children, including CPR, but they were all pronounced dead at Coney Island Hospital.

The mother has no previous arrests or a history of being emotionally disturbed, according to NYPD records. She has previous domestic incidents of harassment and aggravated harassment that the records say have not led to charges. Corey said investigators found no evidence of a history of abuse and neglect among the children.

ALSO READ  4 in 5 pregnancy-related deaths in the US are preventable: CDC

The city’s children’s services board declined to discuss Wednesday whether it should have investigated Merdy before the children’s deaths, and whether the family slipped through the cracks.

“Our top priority is to protect the safety and well-being of all children in New York City. We are investigating this tragedy together with the NYPD,” said an ACS spokesperson.

Yegiants said that while it is possible for someone with postpartum depression to harm their children, it is not common. However, she said postpartum psychosis essentially represents a break from reality and creates delusions that can lead to such violence.

According to the American Psychological Association, up to 1 in 7 women experience postpartum depression, and symptoms can appear during pregnancy and last for days or even months after delivery.

“Postpartum depression isn’t your fault — it’s a real, but treatable, psychological disorder,” the APA says on its website. “If you have thoughts of hurting yourself or your baby, take action now: Put the baby in a safe place, such as a crib. Call a friend or family member for help if needed.”

Mark Crudele and Josh Margolin of TBEN News contributed to this report.