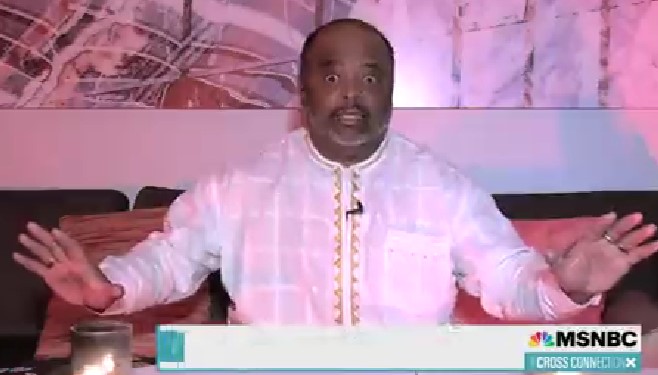 Martin made the comments during a segment on MSNBC’s “Cross Connection” host Tiffany Cross.

After labeling Republican voters “evil,” he declared war on the president’s political opposition.

“This means war. That’s where we are,” Martin announced. “We are at war with these people. These people are evil. They have allowed evil into their home with Donald Trump. He now dominates the party. This evil is expanding.”

Martin added: “When you’re at war, you have to react accordingly. It’s time for Joe Biden to get tough.”

Some members of the media, it seems, believe they are on the same team as the Democrats and are ready for war with the opposition – that is, you.

This kind of rhetoric pushes us into a civil war!
On MSNBC’s “The Cross Connection” Saturday, guest Roland Martin @rolandsmartin condemned the Republicans as “bad” and said:
‘We are at war with these people’ pic.twitter.com/rDlg8hAt29

Just so we’re clear here – everyone on the Democratic side of the aisle has the talking points where they view half the country as enemies of the state.

From President Biden slandering “MAGA Republicans” as extremists and a “threat to this country” threatening them with F-15s, to Hillary Clinton suggesting that the “MAGA faction” must be “defeated.”

It seems clear to me what they are after.

And like clockwork they stir the pot, and loyal left-wing foot soldiers like Roland Martin are calling for war.

The speech @POTUS that I gave last night is one of the most important I’ve seen a president give. We must identify the threat facing our democracy – including a MAGA faction that incites violent insurgency and rejects the rule of law – to overcome it together. pic.twitter.com/7Qiy4vmTh8

“Stop being weak, stop being impotent, stop not fighting back,” Martin pleaded. “What these people want to do to this country is destroy democracy. They want to manipulate elections and that’s why you have to stand strong.

“This is about the future of our children,” he falsely claimed.

This is what I said today on @TiffanyDCross @Cross-connection @MSNBC that has the #MAGA @GOP all on your feet. Hi @TBEN news @FoxBusiness @OANN @newsmax, do you want to debate? BRING IT. You all love to name names, but hold on to your pearls when people shoot back. Damned hypocrites! https://t.co/z8sNCKGFgs

They want a civil war

Ah, it seems only yesterday that the corrupt liberal media berated former President Trump for allegedly advocating a civil war in America. Now they openly applaud it.

Political activist George Conway was outraged when Trump “retruthed” a simple post on his social media platform that read “civil war,” a response to a person who had suggested the country was being destroyed from within.

That was in May, less than four months ago.

The mainstream GOP, Conway said, is “afraid of a Republican base that is becoming more and more radical, which is basically… believes that people who disagree with them politically are a threat to the nation and therefore violence may be necessary to combat them.”

Remember those words, then remember that Biden just named 75 million Americans as enemies of the state just days after he mocked them for needing an F-15, not just a rifle, to fight for America’s freedom.

Biden: “For those brave right-wing Americans who say” [the 2nd amendment] is about keeping America independent and safe, if you want to fight the country you need an F-15. You need more than a gun.” pic.twitter.com/Kz8e62vR8E

And all of that comes in the context of the DOJ raiding the home of the president’s political opponent.

They mock Trump for pointing out discord in this country, then fire the first shots in their own civil war.

Martin made similar comments in 2017 – again on MSNBC.

ALSO READ  Student debt is not the problem. The Higher Education Cartel Is.

“They have allowed evil to invade the White House and he is spreading it through his Twitter account,” Martin said.

What’s funny here is that Martin’s latest diatribe talks about how Trump supporters “want to manipulate elections” when he was caught doing that same thing in 2016.

Remember when former DNC chair Donna Brazile, a CNN contributor at the time, gave Hillary Clinton’s camp some debate questions ahead of a primary debate on the Democrats? Guess where she got them.

“Martin initially denied sharing his questions with anyone, but later said his executive producer and team at TV One had the questions to pass them on to the CNN team,” Politico reported.

Politico had reported that Martin’s question to Brazile was completely identical.

Not good for Donna Brazile and Roland Martin. Not good at all. CNN is turning against them. https://t.co/MVLTW2UQVa

“He failed to explain how Brazile could have the same exact language of a suggested question a day before submitting it to CNN producers,” Politico wrote at the time.

The Bharat Express News - September 28, 2022 0
Rupa Huq, the Labor MP, was banned from the party yesterday after he sparked outrage by saying Kwasi Kwarteng, the chancellor, is "superficially black". Sir...