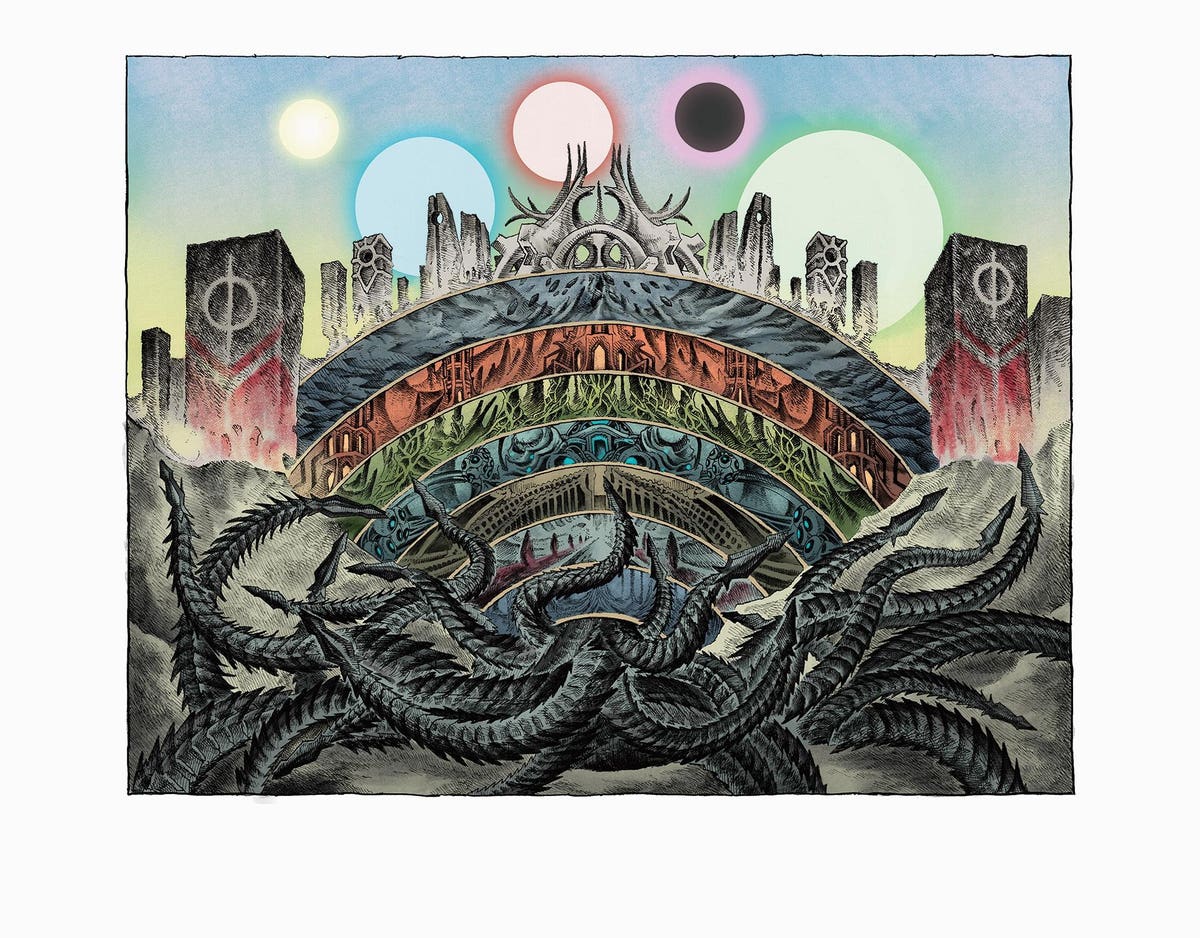 The Fair Basilica is where Elesh Norn built her palace. That’s the layer of the Phyrexian Atlas second from the bottom, not counting the giant spiky tentacles. While the Magic: The Gathering team detailed the world building involved in the Phyrexia: All Will Be One expansion, they used the Atlas as a guide for art and story. Each layer of the Atlas, from The Glorious Facade at the top to the Seedcore at the bottom, represents a group of cards and their intents, functionality, and art.

Over the past few days, Magic: The Gathering has continued the Phyrexia: All Will Be One story with episodes three, four and five of Attack on New Phyrexia, a series that continues to expand the lore of the new expansion. That story is about to reach its climax, as the maps will be released soon and MTG will have to start promoting the next expansion.

As we saw in previews, there’s some great art and new foil card types coming in the Phyrexia: All Will Be One expansion. Last time we looked at some alternate versions of Elesh Norn and lands, featuring some powerful new creatures. This time we take a look at Planeswalkers, dual lands and some new mechanics, highlighting the complete world of Phyrexia. Some familiar faces appear rebuilt, as illustrated with the Legendary Planeswalkers in their finished state.

Here we have Tamiyo, completed sage; Ajani, Sleeper agent; Nahiri, the ruthless one; Lukka, bound to doom; Nissa, ascended animist; Vraska, the sting of betrayal; and Jace, the perfected ghost. They’ve all reached a stage of completion that makes them perfect warriors for the twisted world of Phyrexia, as Elesh Norn sits atop her throne, transforming what was once Mirrodin.

Before we look at the new game mechanics, let’s take a look at some of the battlefields. Five new dual lands with limitless expanded versions appear in Phyrexia, all with somewhat ominous-sounding names, representing a good mix of manatypes. Blackcleave Cliffs sit between the mountains and the swamp, Copperline Gorge touches the mountains and the forest, Darkslick Shores meshes with wetlands and islands, Razorverge Thicket stretches from the forest to the plains, and Seachrome Coast stretches from the plains to the islands .

New game mechanics in Phyrexia: All will be one

Poison returns in Phyrexia gameplay as Toxic. The Poison mechanic was introduced in Magic: The Gathering Legends, but never really gained popularity as a game mechanic. Changing it to Toxic and supporting it with other game mechanics can help it gain some popularity. Toxic deals poison tokens to the player and deals combat damage. Toxic is supported by the Corrupted game mechanic, which grants additional abilities based on the opponent’s poison tokens. A player with 10 poison tokens loses the game.

Oil counters mark Phyrexian Oil as a story element, with different effects based on the map. This effectively replaces the +1/+1 or -1/-1 type counters, as none were found in Phyrexia: All Will Be One. To take full advantage of all counters, there are Proliferate mechanisms that vary depending on the counter type and card.

Finally, For Mirrodin!, a mechanic that mimics the Living Weapon mechanic found in Mirrodin Besieged. This mechanic mainly deals with red or white cards (although there is a blue one), and provides a 2/2 creature token for the Rebellion. Creature tokens are nothing new in the world of Magic: The Gathering, but the rebellion against Elesh Norn is.

Of course, these mechanics are better illustrated with pictures, so here are some cards showing the new mechanics, as well as some other notable cards as examples of the art and world building in Phyrexia.

Experimental Augury (art by Donoato Giancola) and Ezuri, Stalker of Spheres (show off the Proliferate mechanic while Mondrak, Glory Dominus shows off amazing Ichor art by Jason A. Engle. Urabrask’s Forge (art by Lie Setiawan) is an excellent example of oil counters, Venser, Corpse Puppet is another Proliferate example with a few options and White Sun’s Twilight is Elesh Norn’s monument on the Glorious Façade level of the Atlas. This monument is a beautiful artwork by Julian Kok Joon Wen, as well as a functional piece of wizardry.

The next set of Phyrexian horrors is interrupted by Black Sun’s Twilight (art by Jonas De Ro), which is Sheoldred’s Monument on the Glorious Façade level of the Atlas. Blade of Shared Souls is the blue example of the For Mirrodin! mechanic, with his 2/2 Rebel creature tokens. Not to be left out of this overview, the base Elesh Norn, Mother of Machines card (art by Martina Façková) reminds us that she is the protagonist here. Paladin of Predation shows off the new Toxic mechanic, while Skrelv’s Hive and The Seedcore (art by Kasia ‘Kafis’ Zielińska) use the new Corrupted mechanic.

Two new Commander decks are coming to the world of Phyrexia. They represent both sides of the upcoming battle, which should make for exciting gameplay. Corrupting Influence features Ixhel, Scion of Atraxa, a ruthless Phyrexian Angel who uses both the poisonous and the corrupted mechanics. This deck runs white, black, and green and is centered around that poison mechanic.

Neyali, Suns’ Vanguard rules the Rebellion Rising Commander deck, a Red and White Rebel-focused set. It features a go-wide creature stack, with a very aggressive style of play. The rest of the cards found in these Commander decks will be revealed in the coming days. As with previous expansions, there will be a bundle, in this case the Phyrexia: All Will Be One Compleat Edition Bundle.

Along with everything else, the Commander decks and the Phyrexia: All Will Be One Compleat Edition bundle will be released on February 10, with a week of prerelease events leading up to the full release. Elesh Norn awaits you on her throne of completed Mirrodins.