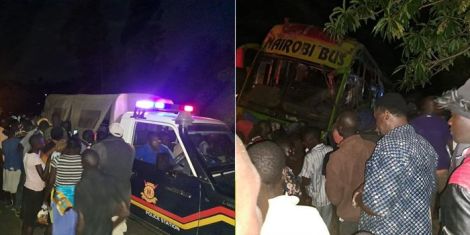 A bus bound for Nairobi from Uganda’s Mbale district on its way to Nairobi crashed in Lwakhakha, Bungoma, on Saturday, January 7.

Reports indicated that the bus failed to make a turn and went off the road, hitting a mother, daughter and a Boda Boda rider.

At least 49 other people were injured in the crash, according to Patrick Kitau, the police commander of Bungoma district in Kenya.

New details have emerged about the cause of the accident, with reports in Ugandan media revealing that the driver was drunk and had an argument with his conductor before the bus overturned.

A collage of a police van and Sirisia MP at the scene of the accident on Saturday, January 7, 2022.

A report of Monitora Ugandan newspaper indicates that at least eight Ugandans were killed in the death toll.

Likewise, the three TBEN hit by the overturning bus were pronounced dead.

It has been confirmed that eight Ugandans are among the dead,” said Mt Elgon Regional Police spokesman, Assistant Superintendent of Police (ASP) Rogers Taitika.

Sirisia MP John Waluke also visited the scene of the accident and promised to follow up on the matter.

“Tonight I just rushed to the scene of the accident in Namundi in Lwandanyi district where a bus bound for Nairobi was involved in an accident.

“The bus lost control and went off the road hitting a bodaboda rider, a woman and a child who died on the spot,” he revealed.

“I will engage the relevant authorities to find a way to mitigate accidents on the Lwakhakha-Chwele road claiming the lives of our people,” he added.

An analysis by the National Transport and Safety Authority (NTSA) shows a 3 percent increase in road fatalities from November 15, 2022, with 4,432 fatalities compared to 4,271 during the same period last year.

Between January 2022 and December 2022, more than 1,595 pedestrians were killed crossing roads. 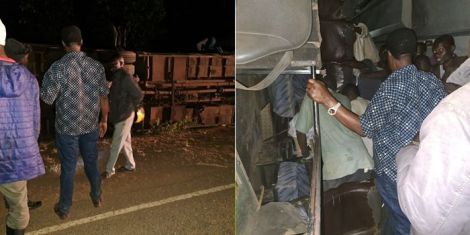