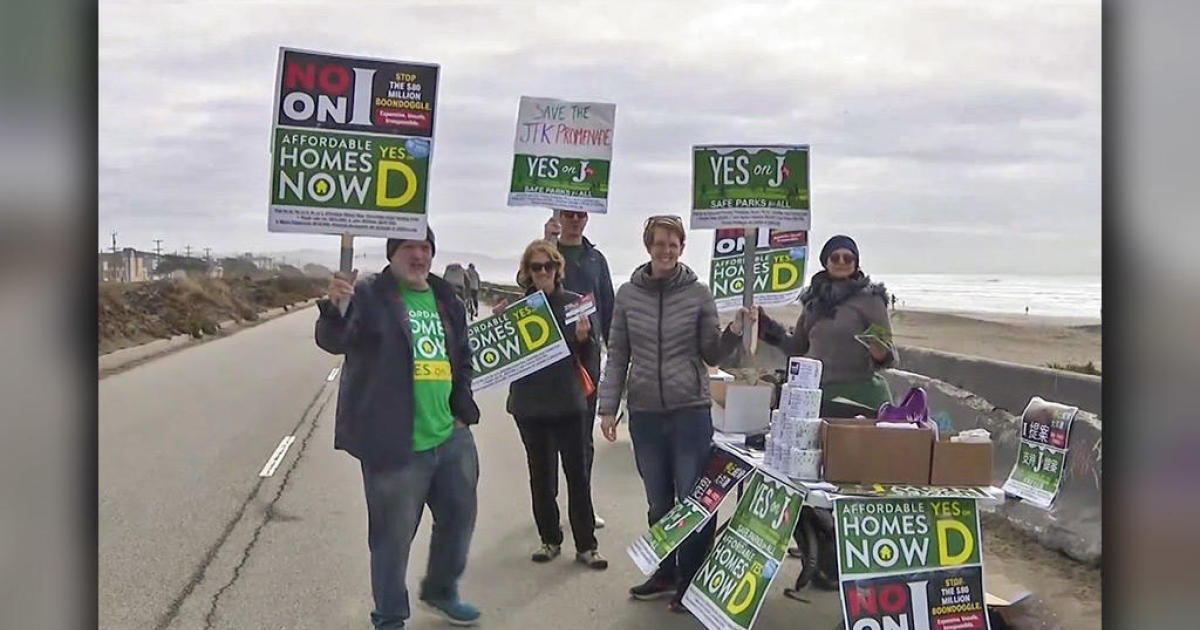 SAN FRANCISCO — Voters head to the polls on Tuesday and, in some Bay Area cities, the issue of housing is prominent on the ballot. Voters are increasingly being asked to make decisions, even as trust in elected officials has declined.

Jake Price spent his Sunday going door-to-door in San Francisco’s Sunset District in a last-minute bid to clear the vote for Proposition D. A little further away, on the Great Highway, other activists pushed for the same measure.

“It says if a project follows all the rules, it’s automatically approved. It takes the board of supervisors out of the process,” said Todd David, a Prop D supporter with the Housing Action Coalition.

Proponents of a competing initiative — Proposition E — say theirs is what it takes to tackle the cumbersome bureaucratic process that stands in the way of more affordable housing.

“So this would get around that, streamline it and make it much more efficient and therefore lead to more affordable housing production,” said Prop E supporter Rudy Gonzalez.

Meanwhile, yet another housing measure is Proposition M, which would impose a vacancy tax on investment homes if left vacant for more than 182 days. SF Supervisor Dean Preston supports that initiative.

A similar measure is on the Berkeley ballot. So what’s going on? Why are so many housing policies being drafted for a vote of the people? Kevin Zwick of United Way Bay Area thinks he knows.

ALSO READ  Neal Brennan on Finally Out of Chappelle's Shadow

“I think there’s a lot of frustration in a lot of places when it comes to the situation around affordable housing in the Bay Area,” Zwick said. “If people get frustrated and they don’t see any legislation passed by the state or by local councils, then people go to the polls and I think that’s a good sign.”

It’s probably not surprising. What has been done so far has not brought home prices down and residents have lost confidence that government at every level has the will or ability to create the number of homes they need. So citizens are engaged in a bit of vigilante policy-making.

“Citizens are coming together and saying, ‘our elected officials have let us down’ and they are grasping the reins,” said Todd David. elected officials. But citizens will lead the way in addressing our affordability and displacement crisis.”

Ballot law can cause its own problems, but, for better or for worse, California gives citizens the power to take government into their own hands if they get angry enough — and few things are more maddening than trying to find an affordable solution. find. place to live in the Bay Area.