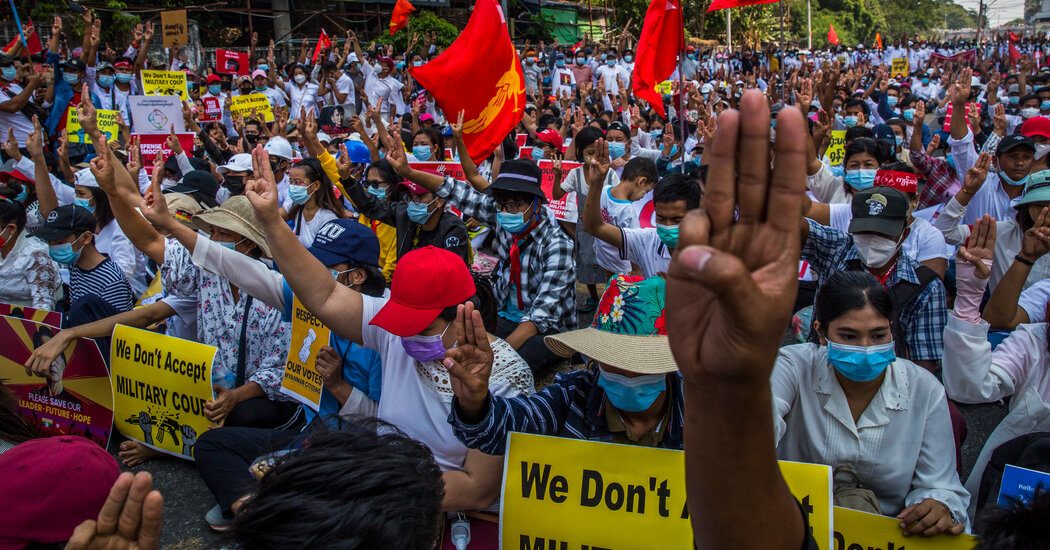 Strikers flocked to the streets of Myanmar on Monday knowing they could die. But they still gathered by the millions, in the biggest rallies since a military coup three weeks ago. Their only protection came from hard hats, sacred amulets and the collective power of a newly called general strike.

The generals had tried to put an end to Monday’s dissent with barricades and fleets of vehicles parked in strategic urban areas. Armored vehicles patrolled, while snipers took up their posts on the rooftops. A worrying warning had been issued hours earlier on state television: “Protesters are now urging people, especially adolescents and emotional youth, to embark on a path of confrontation where they will suffer loss of life. “

But the army’s show of force did little to quell Monday’s general strike, which took place peacefully in hundreds of towns and villages. Columns of people sprawled on the horizon near a crossroads and a pagoda in Yangon, Myanmar’s largest city, and at Mandalay Station, the second largest city. They gathered in Martyrs Street in Dawei, a seaside town, and near the clock towers in Monywa and Hpa-An, in the center and east of the country.

“I will sacrifice my life for our future generations,” said Ko Bhone Nay Thit, a 19-year-old university student in Mandalay who left home Monday morning armed with his mother’s prayers and the effects of a holy water ritual. . “We have to win.”

The weekend had brought a bloodbath to the anti-coup resistance. On Saturday afternoon, two unarmed protesters were killed by security forces in Mandalay; one of the dead was a 16 year old boy. On Saturday evening, a member of a neighborhood watch corps in Yangon was shot dead. The day before, a 20-year-old woman died from wounds sustained by a bullet to the head on February 9 by security forces in the capital Naypyidaw. She would be the first demonstrator of the movement to have been killed by the authorities.

Monday’s general strike brought together officials, bank workers, doctors, supermarket cashiers, telecommunications operators and oil rig operators. Pizza delivery men, KFC employees and bubble tea servers also joined in. The nationwide boycott widened a civil disobedience movement that crippled the banking system and made it difficult for the military, which seized power from the elected government on February 1, to do much.

The strike sparked another mass boycott on August 8, 1988, when workers took to the streets to protest against a military leadership that had ruined the economy. The junta responded with bullets, a stain of blood on Myanmar’s national memory.

But this murderous crackdown, along with another in 2007, did not deter Monday’s protesters.

In Mandalay, Daw Htay Shwe, a restaurateur, said she made her will before joining the rally at the train station.

“I will protect the democracy of our country with my life,” she said.

In Yangon, protesters stomped on posters of a sniper allegedly targeting protesters in Mandalay on Saturday. A group representing a military technical college also joined the march.

“I cannot live under a military dictatorship,” said Daw Myint Myint, a housewife in Yangon, who was under the hot afternoon sun. “Our leaders, whom we elected, whom we trusted and respected, are arrested. I am here to express my opinion that I want them released.

The coup ousted the civilian government of the National League for Democracy, which had shared power with the military for five years. The main elected leaders were trained by soldiers, including Daw Aung San Suu Kyi, the leader of the National League for Democracy, who has been charged with obscure crimes that could put her in jail for six years. Prior to the brief experience of hybrid military-civilian governance, the military had imposed direct rule over Myanmar for nearly half a century.

As of Monday morning, more than 560 people were arrested for dissenting against the coup, according to a local group that tracks political jails. In the afternoon, at least 150 protesters were arrested in the forest town of Pyinmana, not far from Naypyidaw, where mass detentions were also reported. The State Administrative Council, replacing the putschists in Myanmar’s elected government, struck down civil liberties, allowing indefinite detention and warrantless police searches.

The United States government imposed financial sanctions on some of the coup plotters and their associates. Other sanctions were already in place due to the army’s persecution of ethnic minorities, including Rohingya Muslims, who fled the 2017 massacre to seek safety in neighboring Bangladesh.

On Monday, the UN refugee agency warned in a statement that a boat filled with Rohingya trying to reach Malaysia was in distress. Hundreds of Rohingya have died at sea in recent years, trying to leave Myanmar or Bangladesh, where they are confined in large refugee settlements.

“Many are in extremely vulnerable condition and apparently suffer from extreme dehydration,” the United Nations statement said. “We understand that a number of refugees have already lost their lives and that the number of deaths has increased over the past 24 hours.”

Ms. Aung San Suu Kyi’s civilian government has repeatedly defended the military in its campaign against the Rohingyas, who many in Myanmar viewed as Muslim intruders in a predominantly Buddhist country. The violent expulsion of 750,000 Rohingya from the country in 2017 failed to catalyze widespread protests or condemnation among them.

But one of the groups that demonstrated in Yangon on Monday held up a banner apologizing to the Rohingya and other ethnic minorities, who make up at least a third of the national population.

In recent years, conflicts between the military and various ethnic insurgent groups have left hundreds dead and tens of thousands displaced. On Friday, a civilian was killed in Shan State when hostilities resumed.

One of the two protesters who were shot dead in Mandalay on Saturday was Ko Wai Yan Tun, a 16-year-old boy who came to work in the city. To survive, he pushed a cart through a local market, where stall operators called him “little boy.”

As the protests mounted near the market, Mr. Wai Yan Tun joined in as a duty to his future, said Ko Myo Zaw, a friend.

“He always said his life would be perfect when he had a cell phone and a motorbike,” Myo Zaw said. “He was a great guy.”