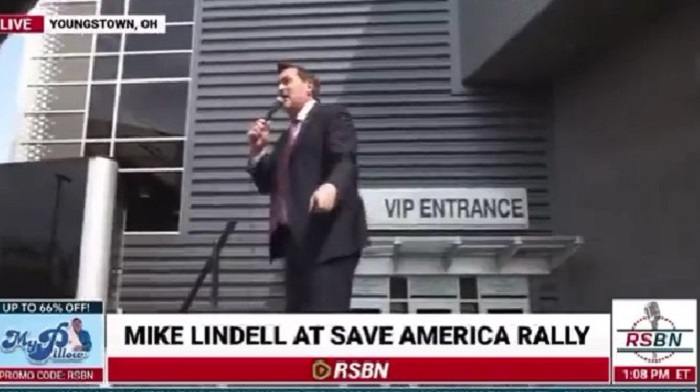 MyPillow CEO Mike Lindell, an ally of former President Donald Trump, announced last weekend that he and his legal team plan to sue the FBI and the United States government after last week’s reported phone seizure.

During an appearance on Steve Bannon’s War Room podcast on Friday, Lindell announced his intentions, stating that it involved multiple alleged violations of the Constitution by the FBI.

At a Save America Rally in Ohio on Saturday, the highly successful entrepreneur doubled the threat.

“Tuesday, we’re going to sue the United States government and the FBI,” Lindell said to applause.

Mike Lindell had his phone confiscated by the FBI

As reported by TBEN last week, MyPillow CEO Mike Lindell was given a search warrant and his cell phone was seized by the FBI while he was at a Hardee’s drive-thru in Minnesota.

According to Mike Lindell, the FBI seized his phone tonight. pic.twitter.com/a7iiF2fPT8

The New York Times reported that Lindell was being questioned about his connection to Tina Peters, a county clerk in Mesa, Colorado who was recently charged with state charges related to a plan to download data from voting machines used in the 2020 presidential election.

Peters pleaded not guilty to the charges.

A new CNN report indicates that the subpoena lists Lindell the names of at least seven subjects the Justice Department was seeking information about, though they note that he “has not been charged with any crimes or misconduct.”

Lindell was seen with a replacement phone during the rally.

Mike Lindell said he had some new companies lining up to sell products on his website, but they canceled it this week after the FBI seized his phone. pic.twitter.com/5Ny07fcGNg

RELATED: Trump jokes that JD Vance ‘kissed his ass’ after saying negative things about him in the past

During his interview on Bannon’s podcast, Mike Lindell explained that it wasn’t just about the cell phone itself, although he noted that he had lost significant business to the FBI raid.

“We lost a lot of the business because of that,” he complained. “There were four products that were cancelled. Four different people because they are afraid of what the FBI has done.”

But, the CEO of MyPillow said, he wants to set a “precedent” in the fight against the FBI.

“We’re going to places no one has ever been. This will set a precedent. This has to stop,” he said.

Mike Lindell denied any wrongdoing, saying the entire effort by the DOJ and the FBI is “one big charade.”

“I don’t have anything they would need on my personal and my work phone,” he said.

“We now officially live in an armed police state, staged elections and all,” Trump wrote on his Truth Social media feed. “Our country is a laughing stock all over the world.”

Tucker Carlson: “The FBI just raided the guy who sells pillows on this channel. Not because his pillows are bad, but because they don’t like who he voted for.” pic.twitter.com/pKc4KFRVV7

“The majesty of the United States is gone. This shouldn’t happen,” Trump said.

‘These people stood behind us’: US veterans lobby to rescue allies trapped in Afghanistan